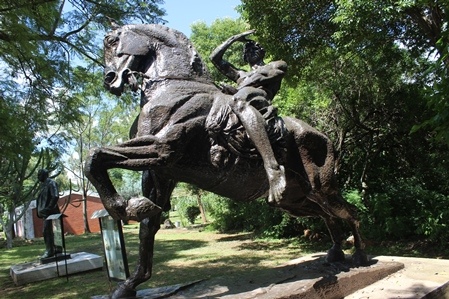 THE recent ‘cry’ from the Zimbabwean white community that the European Union (EU) and United States of America should unconditionally remove all sanctions imposed against President Mugabe and Zimbabwe should be taken with a pinch of salt.
On Monday, an all-white- group, Zimbabweans Against Sanctions (ZAS) joined the anti-sanctions lobby, calling on the EU and United States to lift all the restrictions on Zimbabwe.
The group includes former Zimbabwe Cricket captain Heath Streak, Mathew Smith and his father Garry.
Popping up 12 years after Zimbabwe was slapped with illegal sanctions by the West and its allies; one would ask, ‘how sincere is Streak, the Smiths and company?’
For over a decade, the Government, regional and international blocs, the business community, churches and some indigenous civil society groups have been calling for the lifting of sanctions, arguing that the sanctions were hurting the ordinary men and women on the street.
Where were these whites and why are they suddenly calling for the removal of sanctions now, after more than a decade of silence?
Is it because regime change has failed in Zimbabwe and these whites are now adopting the ‘join them if you cannot beat them’ strategy?
A decade ago after the Government embarked on the Land Reform Programme, whites left Zimbabwe in droves and called for economic sanctions to be imposed against Zimbabwe.
Since then, they have been gallivanting all over the world, rubbishing and tarnishing the image of President Mugabe and the country.
The MDC, the party they formed has been rejected by the people and was heavily walloped in last year’s July 31 harmonised elections and for the past decade, sanctions were Britain’s regime change agenda weapon.
They had hoped sanctions would make the economy ‘scream’ and cause untold suffering to ordinary people and in exchange for a ‘better life’, they would vote ZANU PF out of power.
Sanctions have caused untold suffering, but Zimbabweans have stood steadfast and resilient and defended the country’s sovereignty.
This was made possible by President Mugabe’s policies and programmes such as the Land Reform Programme and the Indigenisation and Empowerment Policy.
Despite the success these programmes, it is important to note that Rhodesians never die, that the struggle for power is far from over and theybstill dream of a return to Rhodesia.
It would therefore not be surprising if ZAS are messengers of their kith and kin in London who are trying to infiltrate ZANU PF.
Therefore, Zimbabweans must be alert.
It is not a secret that for whites the partnership between them and blacks has always been similar to that of the horse and its rider.
When Godfrey Huggins became the first federation Prime Minister, he publicly characterised the partnership between black and whites as one between the horse and rider.
“The relationship that exists between whites and blacks is the same that exists between the rider and his horse,” said Huggins.
“They do not eat or sleep together, but there is a working relationship between them.”
This is the kind of relationship whites want and dream of.
Thus people must not be fooled by whites claiming to have ordinary Zimbabweans at heart.
Heath Streak the spokesman of the lobby resigned in 2004 as Zimbabwe National cricket team captain after the Zimbabwe Cricket Union dismissed his concerns over the composition of the national selection committee.
He claimed in an interview in The Observer that he was faced with moral challenges in captaining Zimbabwe claiming he was asked to falsely tell white players that they were not talented enough and were to be replaced by black players.
Heath Streak was also the cricket team captain when some of the cricket players also left the country, stopped playing for Zimbabwe and lived in exile.
In 2003, during an international cricket match with Namibia in the World Cup, Andy Flower and fast bowler, Henry Olonga wore black armbands, ‘mourning the death of democracy’ in Zimbabwe.
Streak was the captain of the team.
Where is the sudden realisation coming from today?
In his statement this week Streak said the EU should draw lessons from Mandela.
“He was about the future; he was not about the past,” said Streak.
“If he recalled the past and the counted wrongs and injustices, South Africa would be in trouble today.
“He was about reconciliation, he was about dialogue, he was about forgetting the past and focusing on the future that is why he was great.”
President Mugabe, however, has always warned Zimbabweans about white hypocrisy.
Speaking to the Serbian media at the side lines of the recently held 22nd Session of the African Union, President Mugabe said Zimbabwe needs friends like Serbia (used to be Yugoslavia) whose iconic leader, Josip Tito, treated blacks as equals.
“No hypocrisy about it; no cheating about it, you see, and no discrimination at all, taking us as equals,” said President Mugabe.
“Whereas in other areas Europe, America, they will shake hands with you, yes, but they will always regard you as inferior.
“And to this day, we have that problem that Europe wants to continue to dictate to us.
“That’s the friendship we want and not that of, as they used to call it, horse and rider.
“That’s what they used to say: ‘we want the partnership of horse and rider in Africa.’”
The request by the Zimbabwean white community to have sanctions removed must be taken with a pinch of salt.