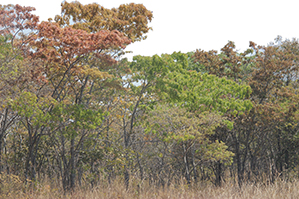 MY son was home last weekend for the schools exit weekend.
Muchembere was also around from Unyetu having been forced to abandon preparing her agricultural plots in order to house sit our Harare home.
Our maid had eloped, leaving a huge gap in the home. Muzukuru and mbuya being together signals resumption of longstanding TV wars; muzukuru after karate channels and mbuya on her beloved ZTV “for news”.
And with this season offering a full bouquet on ‘succession wars” the TV fights were bound to be vicious.
I had foreseen this and planned to separate the two protagonists by arranging a picnic visit to Domboshava caves.
My son loves the aesthetics of the landscape and my mother can never have enough of this landscape pregnant in cultural meaning.
The picnic visit was not to be.
The young man had a terrible night with hay fever like reaction; coughing, watery eyes and congestion. He looked terrible in the morning.
Mbuya made a quick physical examination of her muzukuru and zeroing on skin rashes quickly concluded this was gwirikwiti, measles.
Muzukuru buttressed mbuya’s diagnosis by confirming that a number of boys had recently been sent from school for measles.
I had my own doubts, at 14 surely the young man must have been exposed before to measles, why now?
We concluded he had to see a doctor. In his short life the young man and his siblings have already clocked several hours in doctors’ consultations.
In my growing up in Unyetu I only remember one clinic visit.
This was after a boiling water burning incident.
The next closest was when father brought some anti-malaria tablets from Mutare and forced us to drink them.
I remember this well more for the wrestling match between my brother and the tablets.
The stubborn tablets would just not go down his throat and father would not allow the tablets to be spat. In the end the tablets dissolved in my brother’s mouth. I can still see the anguish on his face.
I digress. We took my son to see a doctor who quickly dismissed our measles fear and instead concluded these were allergic reactions quite common this time of the year.
The mother quickly identified Jacaranda trees as the culprit.
She has long hated these trees with passion as their blooming always heralds a long period of allergic suffering for her.
Jacaranda blooming is Harare’s pfumvudza time.
In the village pfumvudza is a beige musasa flower canopy that heralds beauty and readiness for another fertile season.
Friendships that evolve into marriages trace their origins to pfumvudza.
Pfumvudza also promises a season of plentifulness ahead. Not the Jacaranda pfumvudza.
It marks the beginning of a season of suffering.
I liked a recent piece in one daily that reminded us of the relationship between the City’s purple colour and exams.
Our exam season always coincides with Jacaranda blooming.
This is also the season our children are afflicted with stubborn flues and headaches.
And quite often we are quick to dismiss the afflictions as “exam fever”. As if exams are not enough torture for our children.
The Jacaranda was integral to the beauty of colonial Salisbury.
There used to be a huge festival commemorating the Jacaranda as an iconic part of the city. This was the Jacaranda street festival.
When the war took my schooling to town, Mutare, in the late 70’s I came across this festival in newspapers.
There was a Miss Jacaranda pageant in which participants were always white in a purple backdrop. I also remember a radio station called Radio Jacaranda.
To like this station was considered cool. Jacaranda was synonymous with Salisbury’s urbane lifestyles. Much about the same way red roof tiles, white buildings and pine trees at Mamire homestead near Unyetu intruded the Nyahonhi landscape and represented our imaginary image of Salisbury and good living in the early 70’s.
Zimbabwe, especially Harare, still prides itself with its Jacaranda colonial heritage.
No one seems to care about the medical bill of this purple beauty. We dismiss its toll on school children health as ‘exam fever’.
We care little about what the Jacaranda is doing to our forests. Some countries have seen the light and banned the Jacaranda.
It is among 198 dangerous alien tree species banned throughout Southern Africa on health and environmental grounds. It is invasive and stifles growth of indigenous species. The Jacaranda has a huge toll on our health. We can’t let go colonial Jacaranda nostalgia.
The Jacaranda is not alone in undesirable foreign species in this country.
We also have the hyacinth weed in our water bodies and recently a flower plant that is threatening to wipe out the goat population in Matabeleland.
Even some lawn species can cause serious skin reactions. There are also local botanic species that can cause allergic reactions.
These include murira-nyenze. Some contend that it’s not the tree but the mating of nyenze, cicada that causes the allergic reactions.
In the village those with allergic reactions just avoided getting too close to the tree and its guests. Unfortunately in Harare the Jacaranda is waiting in ambush at every corner.
The Jacaranda was first planted in 1899 in Harare. It is originally from Brazil. It is the aesthetic symbol of Harare and of being Harare wise.
Natives of Harare have developed an accommodation for the Jacaranda. But natives of Unyetu and many other places continue to suffer the Jacaranda curse.
To EMA and City Health officials my question is; for how long shall we continue to suffer in the name of a colonial beauty relic? If it is for the beautiful purple colour our own Mugarahanga matches the Jacaranda aesthetics pound for pound.