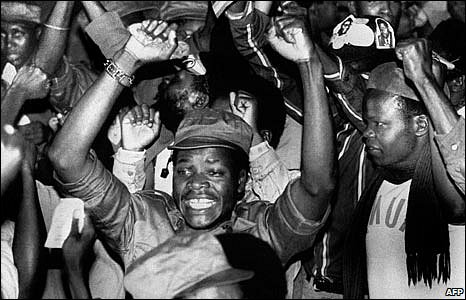 The shortened version of the Mgagao Declaration below must be understood in the context that it was written by young military officers at the main ZANLA training camp in Tanzania at the height of the liberation struggle in 1975. The language is strong and the views are blatant and uninhibited. But the declaration laid the foundation of two important historical events. It laid the basis for the removal of Rev Ndabaningi Sithole as leader of ZANU. It also laid the foundation for the elevation of Robert Mugabe as the leader of ZANU at a special congress at Chimoio two years later in 1977.

WE hereby express our deepest gratitude and appreciation for the efforts made by O.A.U Liberation Committee in the struggle to liberate Zimbabwe from the clutches of imperialism and fascism.
Without the support of the O.A.U Liberation Committee, the Tanzanian government and FRELIMO, the struggle to liberate Zimbabwe would not have developed to its present state.
We sincerely hope and are fully determined to reward these noble efforts by securing the liberation of Zimbabwe people so as to make our contribution to the African revolution.
In line with our sworn pledge to liberate Zimbabwe we hereby submit the following points for your consideration.
After a careful, deep and analytical study of the current situation in the Zimbabwe Liberation Movement in particular and the Zimbabwe revolution in general, we as the people who have vowed to sacrifice our very lives for the liberation of our fatherland, wish to make our feelings and standpoint unequivocally clear to you in the interest of the liberation of Zimbabwe.
1. We hereby state our unswerving and unequivocal commitment to the liberation of Zimbabwe through an arduous armed struggle.
Events and facts have clearly shown that any other course of action would be tantamount to an open betrayal of the Zimbabwean people.
We therefore strongly, unreservedly, categorically, and totally condemn any moves to continue talks with the Smith regime in whatever form.
We the freedom fighters will do the fighting and nobody under heaven has the power to deny us the right to die four our country.
We vowed to fight for our fatherland and the bloodshed in the struggle to liberate our fatherland is ours and strongly not anybody else’s.
1. We herby reaffirm our support for the Unity Accord signed on 7-12-74 by which the four organisations, ZANU, ZAPU, old ANC and FROLIZI were merged under the ANC.
We strongly register our support for national unity, but to us unity is not and end in itself, but means to an end.
Unity is not magic formula, but is one of the weapons in the struggle for liberation.
For Unity to be meaningful in Zimbabwe revolution; it should be based on an arduous and relentless armed struggle because any other course of action would make this same unit inimical to the Liberation of Zimbabwe.
We know of three forms of unity:
(a) Revolutionary
(b) Counter-Revolutionary Unity
(c) Reactionary Unity
Revolutionary Unity is for the purpose of promoting and accelerating the revolution.
In this strength of revolutionaries and we, as revolutionaries, stand for such unity.
Counter-Revolutionary Unity is for the purpose of arresting and setting brakes to the revolution.
It is a weapon in the service of reactionaries in their struggle and is aimed at stamping out flames of the people’s struggles.
This is the sort of unity advocated by Smith, Vorster and their allies.
We strongly condemn and will wage a relentless struggle against a form of unity.
Such Counter-Revolutionary Unity can be brought about by puppets and stooges of the reactionaries as a means of containing the revolution.
Reactionary Revolution Unity of the reactionaries themselves in the struggle for the perpetuation of their existence, their evil rule and the suppression of the broad masses of the people. We are totally opposed to it because it is a sworn enemy of the people.
In your efforts to strengthen the unity of the people of Zimbabwe, we strongly hope that you will take the three forms of unity into consideration and direct your efforts accordingly.
1. We wish to register our strong criticism over the way the ANC leadership has been exercising leadership over the revolution, these are namely:
(a) Bishop Abel Muzorewa
(b) Reverend Ndabaningi Sithole
(c) James Chikerema
These three have proved to be completely hopeless and ineffective as leaders of the Zimbabwe revolution.
Ever since the Unity Accord was signed on 7-12-74 these men have done nothing to promote the struggle for the liberation of Zimbabwe, but on the other hand, they have done everything to hamper the struggle through their power struggle.
They have no interest of the revolution or the people at heart, but only their personal interests.
They cherish an insatiable lust for power.
(a) They have failed to produce a most general line which can form a basis for all theoretical and practical activities of the party.
(b) They have failed to produce machinery capable of processing and effecting the armed struggle.
(c) They have failed to make the necessary arrangements for four trained freedom fighters to and reinforce our fellow freedom fighters at the front during this painful period, so as to lighten their burden.
(d) They have failed to make arrangements for the thousands of recruits in Mozambique to undergo military training.
(e) They have failed to take any practical steps to meet the problems of our comrades in Zambia and Mozambique.
(f) They have
To page 31