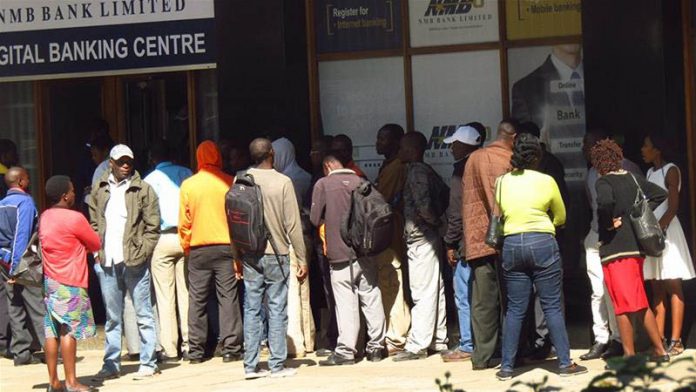 IN the last instalment I referred in passing to the plight of lodgers and tenants caught between mass unemployment worsened by the COVID-19 scourge, on one hand, and significant minority of greedy, heartless landlords forcing the same tenants and lodgers to go on to the illegal market to purchase scarce US dollars to pay rent against the law, on the other hand.

I mentioned that it was obscene for the regulatory authorities to call ‘free funds’ the foreign currency extorted illegally from tenants and lodgers by greedy and lawless landlords.

With the advent of the COVID-19 pandemic, the whole world has been forced to reconsider and revalue public sector agencies and institutions because even the biggest corporations are begging the state to intervene in the economy to save them from bankruptcy.

In fact, the corporations have adopted the cynical slogan of ‘Too Big To Fail’, which is an anti-povo slogan in the sense that it puts big corporations ahead of people as deserving to be rescued by the state from effects of the pandemic.

Given this situation created by the coronavirus and outlined in the last instalment, it is necessary to give just two examples of public sector entities which were unwisely compromised or abolished as a result of the false ideology of privatism and privatisation.

The first one was not abolished; it was simply compromised, turned upside-down, from helping to adjudicate residential rent and other disputes between landlords and tenants or lodgers in the interest of justice, fairness and basic human rights to serving the interests of landlords almost exclusively against tenants and lodgers.

These regulations were viewed by both the old and the new landlord class as too protective of tenants’ and lodgers’ rights, including explicit protections for families with young children.

The Rent Regulations and rent boards fall under the Minister of Local Government and National Housing.  Each rent board is chaired by a magistrate —  and there are five of them throughout the country.

The first step was the amendment of the 1992 Rent Regulations and their replacement with Rent Regulations of 2007. The main differences between the two was that the latter removed provisions against excessive rent together with the powers of the rent boards to set statutory rentals and to declare ‘statutory tenants’ in those cases where a landlord is found guilty of violating the rights of his or her tenants.

The 2007 regulations also deliberately blurred the distinction between the responsibilities of the landlord and those of the tenant, making it possible for landlords to force tenants to pay for capital improvements and structural repairs to the premises as opposed to the 1992 setup where tenants were responsible only for repairing minor fixtures broken or torn through the tenant’s direct use.

The 2007 Rent Regulations in Section 26 still state that:

“No lessor of a dwelling shall quote or demand payment in any currency other than the Zimbabwe dollar.”

And yet, throughout the country, there is a huge outcry against landlords who are routinely forcing lodgers and tenants to pay rentals in foreign currency or to increase rentals in tandem with the illegal parallel market rate of the US dollar to the Zimbabwe dollar.

But the Government, as represented by several agencies, continues to look the other way, pretending that all the US dollars in the hands of the few constitute ‘free funds’.

In the wake of the COVID-19 crisis, a return to the repealed Rent Regulations of 1992 would go a long way to improve human rights, reduce real poverty and lower inflation in urban centres.

The second institution was actually abolished during the privatisation and reform frenzy following adoption of the Economic Structural Adjustment Programme in 1990.

This agency was called The State Purchasing Authority.  It was a state agency responsible for fighting the hiking of basic commodity prices by corporate cartels.

It did so by using public funds to source basic commodities and sell them to the povo at prices much lower than those charged by private outlets.

Now, with food-related inflation as the key contributor to poverty, malnutrition and starvation, worsened via the effects of drought and the COVID-19, it is clear that the State Purchasing Authority was a weapon which the Government should have retained against the cartel habit of price gauging and hoarding of basic goods.

What the Government now calls garrison stores are actually a poor imitation of the wider role which the State Purchasing Authority used to play in protecting the people nationwide.

The latest stance the anti-public sector crusade has taken is to allege that there are too many public sector employees, that many of them are ‘ghost workers’ and that their wage bill is too high and must be reduced by retrenching the workers and cutting the salaries of those who remain employed.

According to economist Vincent Tickner’s booklet TheFood Problem, in the series FromRhodesia to Zimbabwe, Cross was, in 1978, the chief economist of the Rhodesian Agricultural Marketing Authority (AMA).

The AMA was the superior (parent) parastatal whose responsibility was to supervise all Rhodesian state enterprises in the food and agriculture sector, especially in matters of marketing and price regulation for the benefit of white Rhodesian farmers and entrepreneurs.

Cross of Rhodesia, as chief economist for the AMA, enthusiastically defended the strategic role of state enterprises and state regulation in the food and agriculture sector.  In 1978, for instance, he stated that:

“The Agricultural Marketing Authority recognizes the key role which the provision of [state] marketing services can play in the development of agriculture in areas remote from the main centres of development.  However, its prime function is not to act as a development agency, but to ensure that farm produce is handled efficiently and at the least cost to the country, while ensuring that returns from sales are maximised.  Our [state] marketing institutions have played a key role in the development of [settler] agriculture in Rhodesia, by pursing this objective with single-minded determination.  It is the Authority’s intention that this should remain its prime concern.”

In that interview, Cross represented the white-sponsored Movement for Democratic Change (MDC) for which he was the economic advisor.

The reporter acknowledged that in Rhodesia, Mr Cross had headed the Dairy Marketing Board (DMB) and the Cold Storage Commission (CSC), in addition to the AMA already mentioned.

In Zimbabwe, Mr Cross had also headed the Beira Corridor Group of companies whose purpose was to enable Zimbabwe and its Frontline States neighbours to defeat white South Africa’s sabotage of the economies of independent African states surrounding South Africa.

However, the reporter did not recognise a big contradiction about Cross.  He was a man whose generation had prospered as a result of the strategic role which state enterprises played in the Rhodesian economy.  He was a man who, in Zimbabwe, also headed a group of companies which represented the combined economic power of the state and the private sector to intervene in transport and security in order to defeat the aims of the apartheid state as a surrogate of US imperialism.

Yet the very same Eddie Cross, in that March 2000 interview, took a position diametrically opposed to state intervention in the economy and to the retention of parastatals as state enterprises.

In 2000, Cross demanded that the Government of Zimbabwe should have followed the prescriptions of the IMF and the World Bank for Zimbabwe. Those prescriptions included selling off and privatising parastatals and cutting the public service.  We say so because Cross, in that interview, characterised parastatals as a debt-ridden drain on the national fiscus, without ever acknowledging the strategic role which he attributed to them in the Rhodesian economy in 1978.

Yet according to Vincent Tickner’s book:

“Despite the frequent claims that the advances of Rhodesian agriculture in European areas are based on individualistic free enterprise, the European [that is, white settler] farming sector has for many years been protected and supported by the [white] state, particularly in regard to agricultural marketing and  pricing.  In most cases this government involvement has been sought by the white farmers themselves.  It is only in more recent years, after UDI, that the initiative for government intervention has come from the administration (of the AMA) or the government.”

In contrast, African resettled farmers were hit by US-EU sanctions in 2001, just as they were being resettled.  These sanctions have meant that there has been no capitalisation of resettled farms.  It was the very same Rhodesians, now in the diaspora, who spearheaded the call for sanctions using the MDC front.

Even worse, as a nation, we have allowed officials engaged in the devaluation and denigration of the public sector to be involved also in influencing policy and funding for the very same entities against which they have openly expressed bias.

There is a need therefore for the Government and patriotic citizens to engage in the revaluation of state enterprises and parastatals as part and parcel of the African economic empowerment programme and as a way of minimising the disastrous impact of COVID-19.

That is how China moved to its current stage.

It began with massive state intervention in the economy, avoiding pre-mature privatisation.

Here, our State is being asked to cut off the last leg it has got, the public sector and civil service: To achieve what?

In the face of COVID-19, continuing along that anti-public sector path would be suicidal.