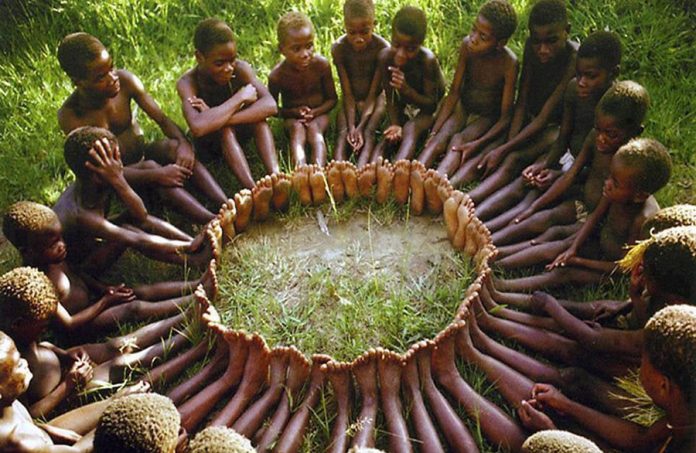 THE frequency with which the dariro  (performance/discourse circle) occurs or is used among Africans suggests that it was originally a shorthand for cultural organisation primordially and subconsciously internalised by our ancestors from observing the spherical shapes and patterning of the movements of planets.

After all, we are part of creation and our growth and survival depend upon our understanding of the universe and our place in it.

We are governed by rhythms and cycles which correspond to those of the spherical sun, moon and earth.

The result has been the ubiquitous occurrence of dariro as a physical structure or field as well as a process of  strategically fielding dariro participants, usually through self-organising movement, depending on the type of interaction intended.

The purpose or task of collective effort is staked out as a field; and dariro marks the centre of the collective activity required: a dance, child-naming ceremony, a court, a consultation, an educational gathering or initiation for youngsters.

Through the dariro, every leader worth his or her title was always assured of multiple sources of advice in the form a circle of colleagues, advisors, assessors or relatives facing one another with  each surveying a different bearing of the entire field of current concern and its environment and thereby offering an original perception and perspective to the collective wisdom of the team, group or company.

In contemporary strategic planning, this would be like the presidency of a nation being surrounded not just by formally recruited Ministers and public service advisors but also by a circle of independent think-tanks, each one so poised as to cover a clear and distinct bearing of the strategic subject(s) of interest expressed symbolically by the fact that participants, in facing each other, also face opposite bearings of the campus/globe: east, west, south, north, south-west, south-east, north-west, north-east and so on.

Staking a whole field and the fielding of differently poised participants or agencies are basic characteristics that distinguish relational philosophy of the dariro from the linear approach.

In linear thinking, one is supposed to ‘think straight’  from the premise to the goal or objective, so that a programme of action comes to be known mainly by its vision and mission declared ex cathedra, in terms of a rigid hierarchy and with little idea how these oracularly pronounced missions are supposed to be achieved or reached: Education for all by the year 2000; an upper-middle income country by 2030; Vision 2063; and Millenium Development Goals,among others.

In linearised strategic plans, field surveys known as baseline studies are normally token measures that are soon relegated to the side as participants get on with the pursuit of targets and target indicators.

Whereas in dariro philosophy and strategy a whole field extends, often radially, between premise and finding or conclusion or objective.

There is no given or presumed straight path visually imagined and leading from premise to target(s) and mission.

As David C. Korten has observed in The Post-Corporate World: Life After Capitalism:

“ The culture of  of a human society is much like what physical scientists call a field, a concept they developed to explain the coherence with which physical matter organises itself. A field is a universal force that permeates space and exerts influence  over matter, such as an electromagnetic or a gravitational field. Fields are, by definition, invisible and may be detected and measured only by their material effects.

Similarly, cultures are the invisible organising fields of societies…As social beings, we have a strong impulse to respond to cultural fields…Cultural

In fact, dariro as strategic construction does not ignore the reality of the negative forces suppressed through coercion in Thomas Hobbes’ philosophy.

The participants facing one another around the dariro and watching each other’s back by surveying the direction  or angle which one’s immediate opposite cannot possibly see are also made  acutely aware of  how fast their relational arrangement could degenerate into a scene of deadly confrontation and arm-to-arm combat.

But by stressing relationality and mutuality over anonymity, the dariro neutralises conflict through the ever-present recognition of its potential in the very construction of this  system of communication.

One of the meanings of the Shona word dariro is ‘the place of recognition’, not avoidance, not coercion and not denial.

This is often marked by the invitation: ‘Ngaipinde mudariro’, at important gatherings, which says: ‘Bring it into the arena’; ‘Let the matter be heard’.

What is striking for the indigenous African student looking at the dariro is its contemporary and even revolutionary relevance.

For instance, the pungwe as dariro in Zimbabwe’s Second Chimurenga was a super outdoor curriculum which brought together all the subjects and lessons which the colonial Government’s schools and Christian mission institutions excluded or could not teach the African majority, mostly peasants together with their children who had just returned as guerillas from exile.

In an entirely different context, Dina Smith published in the Harvard Business Review an article on leadership called ‘How Leaders Can Escape their Echo Chambers’,  June 21 2022.

The article is both a critique of the linear, hierarchical, approach to leadership and a clear recognition of  the  relational (field-fielding) approach implied in the dariro, even though the writer may never have heard of dariro.

Smith wrote:“The higher leaders go, the more likely they are to find themselves in an echo chamber, surrounded by people who think like them and agree with them (without offering fresh, original perspectives).

This occurs partly because of the affinity bias which leads us to favour, associate with and hire the people to whom we feel most similar. The dearth

of diverse perspectives is further compounded by a couple of issues: problem solving methods that lead to (automatic, lazy) groupthink and the difficulty of establishing psychological safety.”

The dariro as symbol, metaphor and practical structure provides psychological safety, tells each participant to concentrate exactly on what the others cannot possibly notice.

It is built deliberately to eliminate blind corners.

As an assemblage of persons with different totems, each totem represents a different perspective on the ecology, the climate, the universe, making it available for the group and its leader.

The purpose of the genre of orature called ‘Nhetembo Dze Mitupo’ (Totem Poetry) is to invite perspectives on the shared reality with the prior assurance that the view of the crocodile cannot  possibly be identical to that of the lion or monkey.

From yet another context, one finds affirmation of contemporary uses of the ancient African dariro in  current architectural work.

This is a demonstration of the benefits for pupils of  designing and building learning centres in dariro-like forms.

Thinking of conflict, when we want to dam the ferocious waters of a mighty river, we use a wall shaped as a crescent, a semi-circle, in deference to the potentially destructive power and force of accumulated water.

The crescent wall allows not only regular spill-overs  but it also anticipates harmless amounts from the huge mass of dammed water flowing around the circular wall during peak season.

That is what dariro as the place of recognition does to conflict.

In its accentuation of life and hope, the dariro simultaneously gives recognition to the ever lurking death that would result from a falling apart at such close range while celebrating the solidarity and the multiplicity of perspectives made available by intimate participants who see one another at the very same time they are each watching a part of the field no one else can see.

The entire globe is symbolically ‘covered’.

The place of shaping principles, proverbs, philosophies and rules to share and to live by.

But the emphasis is on the participants as self-organising agents.

Metaphorically, dariro as a circle represents the desire not to leave any blind corners.

It represents the desire and struggle for integrity and thoroughness in people’s relationships.

We must learn to know, to relate to the world as it is, in order to establish our place in it.

The revaluing of dariro, the persistence of dariro, derives from the realisation that we need living communities of place at a time when cyberism has worsened the distortions caused by linear thinking  in which cyber communities may be mistaken as a substitute for place-based communities.

Such thinking reveals a lack of recognition that we are living beings and our healthy function depends on our participation in a biocommunity, which by its nature is necessarily place-based…Communities of place comprise the people who share a place of living and whose destinies are thereby inextricably intertwined by the concerns and issues this involves.( p. 132)”

Indeed, one challenge arising from sophisticated digitisation is the fact that some of the linked ‘people’

in cyber communities are not people but machines capable of debating  and trolling real persons on line, thereby taking linear thinking to its most literal and most extreme limits.

What does it mean for a machine to disagree with me over global warming or hyper-inflation, when I have  grandchildren and a family to feed real bread and milk and my machine partner doesn’t?