THE recent warning by the US Secretary of State, Michael Pompeo to African Government leaders to observe tenets of  democracy, sounds contradictory as the ‘superpower’ heads for presidential elections.

In fact, the powerful US executive has even promised his country would come down to erring African leaders like a tonne of bricks.

Apparently, Pompeo seems to be upholding all-inclusive, fair and intimidation-free elections as the ultimate expression of democracy.

And yet there are already indications US incumbent President, Donald Trump, is already pre-empting the results of the US impending presidential polls as being plagued with fraud.

This sounds like enough ground to dismiss the results if he loses.

If this is not outright intimidation, then what else could it be!

We wonder whether Pompeo would accept such pre-poll vibes from an African leader, whom the US considers an ‘unusual’ threat.

But if we look back at the history of US elections, we will never be convinced their claim to be custodians of prototype democracy holds water.

On the ground, their claim sounds anachronistic.

The 2000 Bush-Al Gore political drama over a recount in the presidential poll in Florida offers insight into the democracy claimed by Pompeo.

The presidential poll had reached a deadlock and the Florida victor would determine the outcome of the election.

But the votes were that close.

The US Supreme Court, which was predominantly Republican ordered the recount of the vote in Florida to be stopped.

Somehow, the Court gave the vote to Bush and the Democrats saw this as victory by the good ‘grace’ of the justices as opposed to the will of the people.

And President Trump looks like he wants to take advantage of this precedent.

He wants his personal nominee to replace the late Supreme Court Justice Ruth Bader Ginsburg  immediately before the November 3 poll.

He must be fancying his chances if there is another deadlock or any other abnormality in the imminent contest with Joe Biden.

This is likely to be taken to the Supreme Court with, again, the votes of the judges and not of the people deciding the next US president.

And that’s a bit of the dosage of democracy Pompeo must be talking about.

However,  when real democracy is on display, Pompeo does not seem to see it or pretends not to.

Take for instance the general elections in Zimbabwe, with the 2018 poll as a typical example.

Here is a case where observers were indiscriminately invited to follow the poll before, during and after the voting.

The results were quite convincing with ZANU PF winning 145 of the lower house seats and the main opposition, MDC Alliance a distant second with 63.

But this was not the end of the story.

No sooner had the results had been announced than the MDC Alliance started crying foul.

The Constitutional Court even confirmed the results after Chamisa had claimed fraud.

But curiously enough, the Americans, who claim to be champions of democracy seem to be accepting the loser’s far-fetched claims.

And they even want Chamisa to be smuggled into an imaginary ‘transitional authority’, whatever that means

But surely on what basis, when the Constitution calls for general elections every five years.

If an election is all inclusive, fair and intimidation free, what else is needed for it to be deemed democratic?

We thought that is what Pompeo meant by democratic elections.

But, perhaps, with the Americans it also depends on who wins. 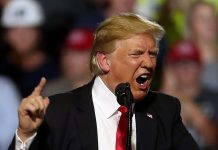 US poll predictions…Trump’s trials and tribulations

Do we know who we are?

In search of democracy