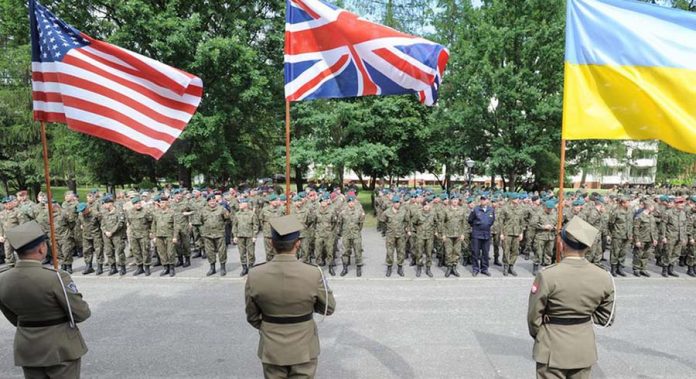 WESTERN domination today is sold on a twin promise of establishing democracy and a free market economy and the small Western-educated Ukrainian elite following its young President Volodymyr Zelensky appear to have naively bought into that promise.

What is puzzling is why they thought opting to join the  US-led North Atlantic Treaty Organisation (NATO) would be the best and fastest means of establishing the two-pillar utopia of democracy and a market economy. It has very little to do with either democracy and a free market, whatever that is supposed to mean in terms of historical reality.

NATO was set up as a military alliance with a primarily defensive charter at the end of the Hitler wars in Europe.

Its purpose was to defend capitalism against communism, drawing the line across Germany.

It was a bonanza for big arms manufacturers and sellers of the West who were state-subsidised monopolies.

So how could it usher either democracy or a free market economy or both in a post-Soviet Ukraine remains a real puzzle.

Worst of all, in 1999, NATO amended its charter from defensive to expansive and it went on a series of provocative adventures abroad, getting involved even in US President George W, Bush’s endless ‘War on Terror’ as far out as Afghanistan and Libya.

So for what benefits exactly did Zelensky think he was sacrificing his country?

The Russians, for their part saw Zelensky as a treacherous neighbour who is seeking to be rewarded for assisting an expansionist NATO to complete its rapid encirclement of the Russian Federation which had started as far back as the NATO war on former Yugoslavia in 1999.

The strategic purpose of the expansion and encirclement is clearly to gain access to food and energy resources in the vast Eurasian region, but for Western monopolies and oligopolies.

The end result: Real tragedy for a small country

A careful reader will not fail to notice that the democracy and human rights rhetoric to which the world was subjected by Western media at the start of the war has been abandoned.

The focus now is on the struggle for technological supremacy.

The Western military-industrial complex now controls the narrative, glorifying the performance of this and that aircraft, drone or missile system and its software against a myriad of others.

We are now faced with a situation of horror that was predicted in the 1990s by scholars such as Jacques Attali about inherent contradictions between the two presumed pillars of neoliberal ideology: democracy and the market economy.

In The Crash of Western Civilization: The Limits of the Market and Democracy, Attali said the market would leave behind or even destroy democratic institutions and controls to become a brutal dictatorship capable of buying any force or any institution standing in its way.

Attali wrote: “It seems obvious that, all over the world, the market economy today is more dynamic than democracy.

Stronger forces are backing it. (They include the military-industrial complex).

The frantic search for money to fund elections, the spread of corruption, and the scale of the criminal economy are all signs of the ascendancy of the market economy over democratic ethics…Powerful minorities seeking to take full advantage of the market economy  will want total control of their resources and will come to view the collective democratic decisions of the poor majorities as intolerable burdens…We will have a kind of market dictatorship.

Political outcomes will be bought and sold (through big money), and the market will rule every element of public life from police protection, justice, education and health to the very air that we breathe, paving the way for the final victory of corporate economic rights over individual (or community) human rights.”

The first lesson seems to be that leaders of small nations are cheap to buy or subvert.

The appetite for quick money is cultivated shamelessly and openly through the TV counting and glorification of billionaires and other celebrities who are living big. Ukrainian President Zelensky himself was a TV comedian.

His image of a Western market democracy within NATO but on the doorstep of Russia has cost his people dearly.

The second lesson is that in most projects and programmes of neoliberal reform, democracy, human rights and anti-corruption serve as mere covers for brutal corporate interests.

In the case of the war in Ukraine, attention has now shifted to the arms race, away from all those values and ideals.

The super stars of the war are weapons systems; and the Ukranian regime is praised in the Western Press for choosing the best weapons systems to fight Russia.

The fact that the country is sinking into deeper and deeper debt by the minute is no matter.

The fact that the country is now a weapons testing ground is no matter.

The third lesson is that, to maintain true independence, a country must carefully watch and safeguard its media. Ukrainian followers of Zelensky fell for the mediated brand of market democracy which does not work even in Western societies themselves.

The Western TV brand of ideal society is powerful and effective on CNN.

We recently saw its effect on  collaborators with NATO forces in Afghanistan, when it came to time for the US to pull out.

The folly of just allowing free-flow of all and any information was proven recently in the fight against the COVID-19 pandemic.

Unfortunately the lessons on media and COVID-19  are forgotten when it comes to political struggles.

Mediated COVID-19 information taught us that lies do kill.

Lies are also killing people in Ukraine, just as they did in Iraq, Afghanistan and Libya before that.

Globalisation not a substitution for regional peace and cooperation

The fourth and final lesson we can choose to highlight from Ukraine is the need for strong regional blocs which can withstand North American manipulation. The North-Americans love to spoil other people’s neighbourhoods so they can come in and offer to intervene or mediate in the resulting conflicts.

The distant wars North-Americans  have fought in the past were not fought to settle local issues but to create a global market for weapons and to manipulate voters back home.

In this way, the local collaborators with the US or NATO will always be disappointed.

It happened in Vietnam.

It happened in Afghanistan.

It happened in Iraq.

It will happen in Ukraine.

But they will not commit regular troops for fear of the media impact of body bags coming back home.

This North-American approach and role is in complete contrast to what the Russians are aiming at: To make NATO expansionism and adventurism costly; to push away NATO encirclement of their Motherland/Fatherland; to warn other East European nations against the temptation to join NATO; and to liberate old Russian territories.

It is clear that the Russian objectives are modest and realisable, even if Russia were to ‘lose’ the war, whatever that means.

Ukraine will never  be the same again.

Ukraine will never enjoy NATO membership even if they were to be accepted.

Meanwhile the North-Americans will remain forever unpredictable, except for their profit making.

Indeed, it was not so long ago that former US President Donald Trump questioned the strategic value of NATO to the US.

If the value is just to sell weapons, that should have been a warning to Zelensky and his camp.

After all, the weapons can still be sold to other buyers, including the Saudis.

So, what is so special about Ukraine and NATO?