SOUTH AFRICA must be very careful of being tricked by the United States into believing that it can be the Messiah, who can  deliver Zimbabwe from  the so-called ‘crisis’ being hyped by the country’s detractors.

We say so because recently US Ambassador to Zimbabwe Brian Nichols urged SADC countries to be ‘assertive’ in dealing with the fictitious crisis in the country.

This is an ambassador of a country which, not along time ago, tricked the world into believing that Iraq had weapons of mass destruction.

Although this was later proved to be completely false, the US had achieved its aim.

Who doesn’t know the US ambassador’s utterances in the recent past which are in unison with with the voices of our detractors.

And we are also aware of gullible characters like ANC’s chairperson of international relations Lindiwe Zulu, who are easily persuaded  to join the bandwagon.We believe hers is a misdirected opinion with no takers in the revolutionary ANC.

All this, is in the middle of relentless pressure from civil society, the MDC Alliance, churches and and Western embassies to crucify Zimbabwe as a country that has thrown human rights out through the window.

Social media is also awash with with stories, audios and images meant to consolidate the picture that of a  country  on the verge of collapse.

But we have known for a long time that there are some Western forces determined to see the fall of ZANU PF.

These are forces always nudging their proxies to build up an image of  intolerable misrule.

Hopefully, this will eventually lead to the influence or even intervention of external forces to rid the country of the revolutionary party, ZANU PF, so they think.

But ZANU PF is not the only revolutionary party in the SADC region.

Non of the ruling parties in the region that achieved  independence through armed struggle is safe.

South Africa is no exception.

That is why the two revolutionary leaders, Cde Cyril Ramaphosa and Cde Emmerson Mnangagwa have decided to frequent dialogue on goings on in the neghbouring states.

The imminent visit by an ANC delegation sent by President Ramaphosa is in line with this sister party-to-party dialogue.

The special envoys are expected to come as neutral observers and find out for themselves the existence of the so-called crisis in the country.

Nothing will be thrown under the carpet.

In this regard, the delegation will listen to tales from civil society, opposition parties and churches, among other stakeholders.

No doubt, detractors will cherish the chance to to present eloquent scenarios of their so-called crisis. But in the end we expect the visit to lay bare a true picture of the situation in Zimbabwe.

However, the two sister parties will have had the opportunity to share notes on the intensity of the pressure by a third force determined to weaken parties of former liberation movements.

A word of warning though to the delegation.

As we have already pointed out, there are cunning forces which may like to to use SA as a scapegoat for their evil machinations.

Remember Resolution 1973 of 2011, where SA as a member of  the UN Security Council was tricked by the West into voting in support of the ‘no fly zone’ over Libya.

This was the resolution which grounded Gadaffi’s air force allowing  NATO to fly in weapons for rebels to finish off Gadaffi.

Unwittingly South Africa, Nigeria and Gabon, as members of the Security Council at that time, were hoodwinked by the West into betraying an African brother.

So to the SA delegation we want to remind them of the adage: Once beaten twice shy. 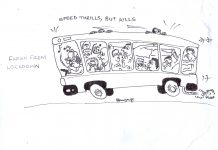