IT’S almost two years since the Transitional Stabilisation Programme (TSP)  was launched in order to lay a conducive base of economic growth to achieve an upper middle class economy by 2030.

As the two-year period comes to an end, results are already  there for all to see.

But before we look at the stabilised economy, we have to retrospect at what prevailed at the birth of this programme.

When the new dispensation launched the TSP in 2018, the macro-economic environment in Zimbabwe was sickly, hence the urgent need to set it on a correct footing.

What with the thriving black market and the galloping inflation!

Finance and Economic Development Minister Mthuli Ncube warned that turbulent times would follow the TSP, as Government would be trying to turn around the economy.

The economy, which had looked moribund suddenly looks lively, with an apparent currency and price stability.

This should be a healthy background to launch the recent National Development Strategy 1 blueprint, with the eventual aim of achieving Vision 2030.

Surely an upper middle class economy is a dream cherished by the whole nation.

It was heartening to hear Professor Ncube saying price and currency stability would be key to his Budget announced yesterday.

We say so  because, while we are celebrating price stability brought about by the TSP, some gremlins are thinking otherwise.

We don’t know whether this was triggered by the muted salary increase of civil servants, but it looks like prices of goods and services have suddenly shot up.

Beef, pork and beer prices, toll gate fees, electricity and water bills as well as  medical prescriptions, just to mention a few, have all gone up and in some cases absurdly.

This has got to be, somehow, arrested.

It used to be understandable, though not desirable, when prices of goods and services were determined by the black market rates.

With the exchange rate having been stabilised by the auction system for the past few months, what could be the justification for this spate of price increases?

This mania of profiteering should be stamped out.

There is also this traditional tendency of raising the cost of goods and services once civil servants get a salary increment.

This will then defeat the purpose of such salary adjustments and this inevitably leads to inflation.

The TSP appears to have had some desired effect on money changers as they seem to be less aggressive.

Moreover, the rapid fall of the Zim dollar on the black market seems to have been tamed.

However, the fact that there are still small-timers lining up the streets, waving bundles of Zimdollars, means there must be a loophole somewhere.

Perhaps the onus is on the banks to explain.

The TSP had given us hope that our currency and prices had stabilised  as we embark on the first stage of the home stretch towards Vision 2030.

But what is needed is maximum co-operation among business, industry, employees and the Government.

Let’s all desist from the temptation to profiteer or to demand what our employer  cannot afford.

Hopefully, with all things being equal, five years from now, when National Development Strategy2 is launched, Vision 2030 will be in sight.

Zimbabwe is for everyone 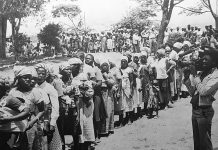 Celebrating the Museum of African Liberation