THE violence and hooliganism that forced the abandonment of the supposedly flagship football match between Dynamos and Highlanders at Barbourfields Stadium in Bulawayo on Sunday must never be repeated.

This is the second time already this season a blockbuster football match was abandoned following a pitch invasion by supporters.

Suspected Highlanders fans are also said to have disrupted their match with FC Platinum at Mandava a few weeks back.

As if that is not enough, the Presidential Independence Cup, again between Dynamos and Highlanders at Barbourfields, was interrupted as both sets of fans took turns to launch missiles onto the pitch.

For heaven’s sake this has to stop!

The latest installment of violence reduced Barbourfields to a war zone.

Apart from invading the pitch, some hoodlums had the temerity to attempt to uproot the goal posts.

And to make sure that the match would not continue, some thugs assaulted the match officials.

Nobody, including the players, felt safe in that environment.

Yet football is a form of entertainment, where even family members should feel comfortable to watch.

In Zimbabwe, football is by far the most popular sport.

After being starved of their game for the past two years because of the COVID-19 pandemic, fans were beginning to warm up to their favourite sport.

Indeed, the petrified crowd on Sunday was the largest post COVID-19 gathering.

How many of those at Barbourfields Stadium on Sunday and any other fans following proceedings from elsewhere will go to watch football matches again?

This is apart from the damaging image that is portrayed to the rest of the world about Zimbabwean football.

The Zimbabwe football league is struggling to attract sponsors.

With hooligans stealing the show at football matches, we wonder how many sponsors would be prepared to be associated with anarchy.

We salute Delta Corporation, but let us not stretch their tolerance to breaking point.

They should be hanging their heads in shame.

We are glad the PSL have suspended matches indefinitely pending investigations to find out how to stop a recurrence of lawlessness at matches.

However, even before their findings, we believe certain measures are inevitable.

Football deserves to be called a beautiful game and indeed it is.

But safety of fans, match officials and the footballers has to be guaranteed at all times.

The football pitch is strictly for match officials and players only during a game.

Pitch invasions should not be tolerated under any circumstances.

True, sometimes referees can make some blunders, like when Diego Maradona ‘Hand of God Goal’ was allowed to stand in a crucial World Cup game against England in 1986.

But this is not to say match officials have the privilege to favour teams of their choice.

Fans’ patience should not be tested through obvious incompetence by match officials.

It is a pity, but the calibre of some of our referees is distinctly questionable.

However, supporters should accept that any match has either of three results; a draw, a win or a loss.

Team bosses should make their supporters aware that any damage they cause to the pitch is paid for by none other than their club.

Teams can also be heavily fined and/or ordered to play in an empty stadium for a number of games.

And if points are deducted for fans’ bad behaviour the worst losers will be the supporters themselves.

It is the coach’s task to educate his players to control their emotions during a game.

Any exaggerated protests are likely to be interpreted by some diehard fans as a signal to intervene. Hooliganism must be stopped and, in cases where a club is involved, retribution must not only act as a deterrent, but must also be passed with minimum delay.

It is inconceivable to imagine that with almost a month gone, the PSL is still mum over the abandoned game between FC Platinum and Highlanders. 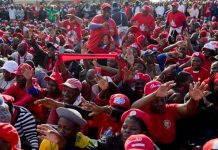 Cyberism, political communication and the 2023 elections