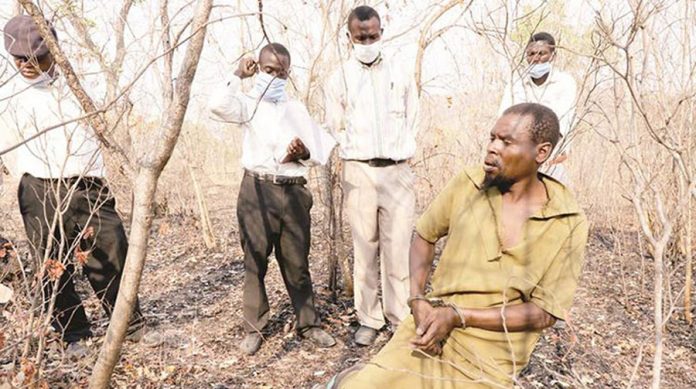 ON the surface, the most obvious ethical question about the media reporting of the story of the murder of seven-year old Tapiwa Makore of Murehwa is how an alleged police video featuring one of the suspects ended up on television and radio before being presented to the criminal court as an exhibit?

Crime scenes are normally cordoned off and the evidence

gathered there is usually secured and protected.

How did this one go to the press, so far away from the investigations?

After seeing clips of the video on ZTV news I was shocked to hear an audio version of the same confession featuring on Diamond Radio in Mutare.

In that audio tape, Tafadzwa Shamba, one of the suspects, narrated in detail each step the two suspects took, from capturing and locking up the seven-year old Tapiwa in his uncle’s hut to sedating him with strong alcohol; from force-feeding him in the hut to transferring him to the mountain; from pinning him down and flashing a torch at his prostrated body to actually slitting his throat and severing his limbs to fit them in bags, and so forth.

Just from those two encounters with the TV and radio versions of the story, I was forced to imagine Tapiwa’s mother, father, brothers, sisters, school mates, friends and all relatives who could be listening to the radio or watching ZTV news.

Whether Tapiwa still had a living mother, living siblings and a living father at the time of his capture and murder could not be established from the initial versions of the story.

Focus was on one of the alleged murderers who became a sort of celebrity!

But even if the relatives of Tapiwa were all dead, given our African culture, there should have been a family or families to which the boy was supposed to belong as part of the settling of the parents’ estate, that is, if the boy was indeed an orphan.

Then my mind moved to a slogan which we have been hearing, especially from national leaders and technocrats in the context of the national digitisation programme: ‘Embrace technology’.

I have objected to the popularisation of this slogan in favour of a more nuanced, more deliberate and strategic slogan: ‘Harness technology’.

I prefer harnessing because it implies studying the gadgets and processes to be adopted; it implies strategic selection of which gadgets to use where and for what purposes, with what expected results; it implies training.

One does not harness even young oxen unless the oxen and the person harnessing them have gone through training.

It is no longer the movie theatre or the drama stage alone that presents spectacles.

All spectacles, whether artificial or natural, give themselves to screening very well and the screen is the key vehicle for globalising their prevalence and teaching.

But the screen is contradictory when it displays spectacles.

Its size and overwhelming presence and dominance on one hand suggest intimacy and proximity; but in reality the screen is a distancing device which detaches viewers from the real events, from alternative events and from morality, social context and ethics.

In the case of terrifying spectacles, citizens’ normal feelings of common responsibility and popular decision-making are replaced by shared fear and shared anxiety which lead to the quest for escape and rescue which reduce person-to-person or community-to-community cooperation.

The purpose of the spectacle is at worst to produce ‘gawking’, which means to stare stupidly, to gape, to stare in shock or amazement, the way a rabbit stares helplessly in the glare of the headlights of a speeding goods train.

In milder forms, spectacles are meant to produce the following effects:

– To shock and awe as was stated in the highly televised US-UK invasion of Iraq in March 2003;

– To proclaim a dominant and domineering stance which cannot and should not be questioned or even adjusted;

– To claim completeness of message through presentation when in fact the message is severely biased and skewed or even staged;

– To dwarf or mock all potential rivals and alternatives as messages; yet none of the claims and assumptions made in that recording of Tafadzwa Shamba has yet been tested for truth.

– To reduce complex issues, situations, messages, cases  and meanings in order to achieve selective focus upon a single issue with a singular interpretation.

The video and audio transcripts of Tapiwa’s murder exhibited all these characteristics.

Tapiwa’s wider relationships have been overshadowed by the one relationship with his alleged killers.

So, where the relational approach of the dariro tends to foster and invite reflection, nuanced responses, suggestions, confirmation or adjustments – spectacular displays evoke thoughts and feelings of surprise, ambush, confrontation, panic, hysteria, interruption, exclusion, harassment and the need for rescue or the gasping for sheer survival.

The spectacle declares its meaning as given or pre-determined, unlike the dariro.

The video clip and audio tape about Tapiwa’s murderers settled mainly on two suspects as the murderers ahead of any court hearing.

All this is because digitisation has made recording and transmission so easy.

– Digitisation will widen and deepen the typical culture of the linear screen which has dominated television for the last fifty years. This culture is centred on visceral images of war, terror, violence, conflict, hatred, sex and death.

For the most part, these screened experiences represent the opposites of truth, reason, reflection, serenity, peace, solidarity or unity. But they sell.

– Digitisation has also globalised necropolitics, that is the global and now widely visualised use of force, terror and sovereign power to decide who should die and who should live. The shrill doctrine of universal human rights is meant to hide this fact. Illegal regime change, illegal sanctions, the monopoly over weapons of mass destruction and illegal wars dominating our screens – all have to do with a few deciding which person, which nations and which peoples can live and which ones should die. The broadcast clip of Tapiwa’s alleged murderers emphasised the victim’s selection by his alleged killers, selection out of the many possible targets available in the area where the seven-year old was picked up. Focus on this picking on a victim stresses a linear relationship between the super abuser and the helpless victim.

– The global visualisation of necropolitics has also taken the world back to 5 000 years ago, back to the necropolitics of the ancient Middle-East (now digitised both by the Islamic State for Iraq and the Levant, ISIL, and by its Western enemies). These forces are in the business of deciding, unliterally, who should be massacred or murdered and who should be spared. Focusing mainly on murderers and their narratives forces us to participate in their choice of death, hatred, isolation, torture and helplessness over love, freedom, solidarity, cooperation and understanding.

Soon after the highly problematic airing of Tafadzwa Shamba’s narrating how he took part in the murder of Tapiwa Makore, the National Assembly was told that amendments to include sections on media regulation in the Zimbabwe Media Commission Bill were going to be shelved.

They were going to be brought back as integral features of a new separate bill to be called The Media Practitioners Bill.

This postponement of media regulation provisions linking Section 249 to Section 61 (5) of the Constitution of Zimbabwe means that the nation, through the Zimbabwe Media Commission (ZMC), will continue to face unresolved questions on media governance. One set of questions centres around the impact of media corporatism on media governance, including impact on media ethics.

The other set of questions centres around the attraction of digitised media to what author Peggy Noonan called ‘the culture of death’.

First, a look at corporatism and media governance.

Clive Hollick, owner of Meridian Broadcasting and Anglia Television agreed with Professor Robert Machesney, author of Rich Media, Poor Democracy, that statutory regulation of media was the only way to protect democracy and meaningful access to information against corporatism.

“Contrary to the general view, regulation can be the defender of free speech and the forces of the market place the chief threat to a plurality of views.

But new technologies demand new forms of regulation and Government intervention may be the best way of ensuring the plurality of voices on which democracy depends.

The claim that technology makes regulation more difficult, even impossible, is a fallacy.

On the contrary, it makes it easier.

Rapid and complex technical change should not divert governments from addressing the more predictable consequences of enduring and straightforward human instincts which drive media organisations.

The quest for market domination and the desire to wield influence and control are familiar and enduring characteristics of these organisations.

Governments must defend public interest by protecting and sustaining freedom of expression, diversity of views, plurality of ownership and consumer choice, safe in the knowledge that media companies are unlikely to go hungry.”

On media ethics and ‘the culture of death’, the best example to use is that of the US and the problem of gun culture and violence.  While owners of media corporations cleverly assert their US First Amendment rights to publish, Peggy Noonan, Professor Robert McChesney and many others have shown that the real issue is not the right to publish but the tendency of digitised media to favour stories of conflict, violence, murder, rape and death over other stories, to the extent of entrenching what Noonan called the culture of death.

Noonan focused on school children who almost every year in the US have massacred fellow students and their own teachers in imitation of what they see on television and in videos.

The boys who did the killing, the famous Trench Coat Mafia, inhaled too deep the ocean (media culture) in which they swam. A child is an intelligent little fish. He swims in deep water. Waves of sound and sight, of thought and fact, come invisibly through that water (the media) like radar. The sound from the radio; the headlines on the new stand, on the magazines, on the ad on the bus as it whizzes by – all are waves. The fish – the child – is bombarded and barely knows it. But in America the waves (of media) contain words like this…was found strangled and is believed to have been sexually molested… had her breast implants removed … took the stand to say her killer was smiling the day the show aired … said the procedure is, in fact, legal infanticide…is thought to be connected to earlier sexual activity among teens … died of lethal injection… had threatened to kill her children … said that he turned and said ‘you better put some ice on that’ … showed no remorse… which is about a wager over whether he could sleep with another student… which is about her attempts to balance three lovers and a watchful fiancé…

This is the (media) ocean in which America’s children swim.  This is the sound of US culture. It comes from all parts of America and reaches all parts of its culture, and all the people in it…”

The message from Noonan seems to be that there are young people who, when they repeatedly watch footage of murder, rape and other violence (similar to the Tafadzwa Shamba footage), they end up admiring the murderer as a celebrity if not a hero.  And depending on the numbers so repeatedly exposed, a culture of death takes root, with too many people treating gratuitous violence as normal.