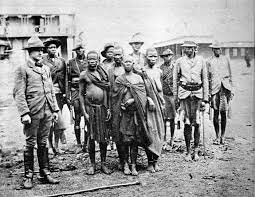 Today, Zimbabweans enjoy living in a free and independent country thanks to the efforts of people like Mbuya Nehanda who sacrificed their lives to liberate the country from colonial rule.

White settlers mocked her, dragged her to the gallows and hanged her like a criminal.

Her crime was defending her birthright.

She was not going to let anyone deny her and her kith the freedom to be independent in their country.

It is this fighting spirit in Mbuya Nehanda that is brought out in the poem Try Again by Chiedza Musengezi.

The poem centres on motherhood, its expectations and the sacrifices a woman has to make to protect her children.

In the poem, when the narrator got married, she knew that, as a woman, a giver of life, her in-laws expected her to extend the family’s bloodline by bearing children.

And I gave birth to a baby girl.

They danced and ululated.

They sang ‘you gave us back Mother’

Who died when we were young

So they named her after Mother – Sekai.”

Given the narrator’s cultural background where semi-autonomous fields impact one’s decisions, she got pregnant again after being encouraged by her in-laws.

What are you waiting for

I plucked my breast out of her mouth

And carried another in my womb.”

In order to please her in-laws, who were expecting a baby boy, the narrator continued bearing children.

“This time they wanted a boy,” writes Musengezi.

“Who could use his sister’s dowry to marry

But another girl came

It did not matter

They would let me try again.”

Finally the narrator gave birth to a baby boy, Chamboko.

The narrator highlights how the issue of disability was perceived in her society as when it turned out that Chamboko was disabled it was difficult for the family to accept him.

“Chamboko could not sit up or smile

I travelled the entire country

I searched everywhere for help

The medical doctors, healer and shaman.

The narrator was shamed and mocked because of Chamboko’s condition.

“They all pointed at me,” writes Musengezi.

“You are a witch

You do not want the clan to grow.”

However, just as Mbuya Nehanda did not let the words of her detractors break her fighting spirit, the narrator defended her children and left her in-laws’ home to raise he children in a ‘healthy’ environment.