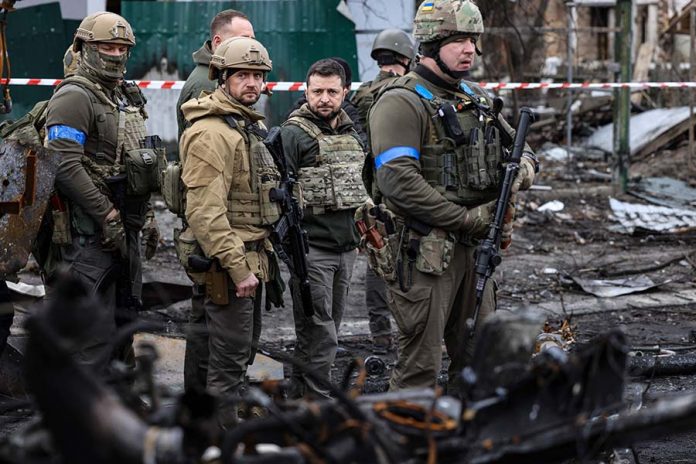 RUSSIA’s timing of its special military operation on Ukraine means that Western neo-liberal imperialism is being forced to respond by means which contradict, if not destroy, most of the claims and values of global neo-liberalism.

This is not entirely surprising. Whenever the so-called Washington Consensus has faced crisis, it has responded in ways that undermine its own ideology.

In the current reaction to Russia, all the neo-liberal values of globalisation, free-flow of information, open society, open trade and reliance on private capital for development and prosperity have been thrown away; to be replaced by the most rigid sanctions regime in history, in which innocent trade relations must now be punished as long as they are construed to be benefitting Russia in any way.

This glaring contradiction is what is leading many observers to conclude that a new world order is emerging from the ashes of the Russian war on Ukraine.

To understand that emerging world order, it may be necessary to remind ourselves of that which is being replaced.

Roots of the dying world order

The Marshall Plan taught the lesson that contemporary development options, models and paths are made through politics.

Therefore, the Western development aid regime must aim to foreclose or condemn political systems and values which stress the need for autonomous or alternative development options, models or paths.

In the same vein, the Western aid regime must reward those States which accept modelling within the general limits laid down at the time of the Marshall Plan.

By succeeding in foreclosing radical nationalist, communist and socialist options in Europe, the agencies administering aid assumed the role of policymakers and teachers of development. This role was refined and given to the World Bank; the IMF, the WTO, USAID and all the other national authorities on international development co-operation in the G7 countries. (Bradlow and Grossman; 1995: 442)

A global development aid regime has existed up to now in which certain agencies presume to teach the world how to develop. Zimbabwe has been seen in that context as too small and too young a nation to challenge, let alone reject, that legacy of the Marshall Plan.

Since the quarrel between Britain and Zimbabwe was precisely about political options which lead to economic change, Zimbabwe has been viewed and treated as a pupil who presumes to have found and learned development (meaning political) lessons contrary to those of the recognised and appointed agents and agencies with a mandate to teach development and formulate policy for the South.

In other words, the real success of the Marshall Plan was its reconstruction of imperialism from the old territorially bound empires into a transterritorial empire as defined by Susan Strange in Toward a Theory of Transnational Empire.

As a response to Russia in Ukraine, the US has had to impose such a draconian sanctions regime on the world that many of those large companies who once obeyed US-imposed rules routinely are having to defy them or perish.

The Marshall Plan may have been directed at Europe, but its economic and political successes were subsidised by the colonies and former colonies of Europe; and its enduring effect was that, for the next 60 years after 1945, US hegemony would be consolidated and demonstrated over four basic social needs of the contemporary global society: These four needs were security, knowledge (information), production and credit (finance).

The victory of Zimbabwe over Britain in its quarrel will depend, to a great extent therefore, on the on-going disintegration of the US’s transterritorial empire and the diminishing ability of the same US to command those four basic areas of social need: security, knowledge, production and credit (finance).

In turn, the fact that Britain entangled itself in the wars on Yugoslavia, Iraq and Afghanistan diminished its capacity to coerce Zimbabwe. In fact, Britain’s entanglement in those wars enabled Zimbabwe also to internationalise its argument against Britain. Zimbabwe’s ability to counter – internationalise its quarrel with Britain and, to some extent, with the US, means that these countries’ power over knowledge has diminished. But we are jumping too far.

Authority in this non-territorial empire is exercised directly on people using knowledge not on land. It is exercised on bankers and corporate executives, on savers and investors, on journalists and teachers. It is also, of course, exercised on the heads of allied and associated governments, as successive summit conferences have shown.

Moreover, all the major policy trends of the 1980s that have commonly afflicted most of the developed and semi-developed countries and that have appeared to be of a national and internal character -deregulation, deflation, privatisation, and so on, have been set off in the United States and have been followed by others who felt unable to resist. In all these policy areas, frontiers have been no defence against pressures emanating from the United States.” (Strange, 1990: 170)

The transterritorial power of the US, as analysed by Strange, is being shredded over Ukraine. Most of the damage is being inflicted through over-reliance on sanctions.

But prior to its current shredding, its assumptions and presumptions were quite impressive, as De Lissovoy pointed out:

“This ideological construction [of neo-liberalism] has led to a present in which an increasingly polarising capitalism, in spite of the inequalities it produces, is generally understood to be the only possible form of organisation of society.  Capitalism, in its neo-liberal moment, increasingly institutes itself as co-equal with reality itself, so that to imagine alternatives to it is seemingly to lapse into delusion.  Rather than presenting itself merely as the superior economic and social model against competing alternatives, capitalism now presents itself as the only conceivable form of life — an ideological condition Mark Fisher identifies as ‘capitalist realism’.

Beyond opposing arguments for other economic and social models as unrealistic, this felt sense of the inevitability by capitalism suggests that such arguments for alternatives are incompatible with any reality. This is so even in spite of (or because of) the acceleration of inequality and social fragmentation that neo-liberalism, as the enhanced and aggressive form of contemporary capitalism generally takes [and] increasingly produces.”

Politically and symbolically, the neo-liberal system that emerged after the collapse of the former Soviet Union saw itself as expanding from the G7 capitalist countries to the Group of 20 and the so-called World Economic Forum.

But, in contradiction to that expansion, the US began to extend its harsh sanctions regime from North Korea, Iran, Syria and Zimbabwe to China, which China was already a member of the G20.

Now, in the wake of Russia’s war on Ukraine, those same sanctions have now been extended, in their harshest form, on Russia.

As Nick Beams has pointed out in his recent World Socialist Web Site article republished in The Herald of April 4 2022:

“The sanctions regime imposed by the US has implications that go beyond Russia.

The measures imposed so far make clear that any country, including major powers [in the neo-liberal camp itself] that crosses the path of US imperialism in its drive to open new regions of the world for plunder can be immediately excluded from the global financial system based on the US dollar.

Larry Fink, the head of the giant investment fund Black Rock said: ‘The Russian invasion of Ukraine has put an end to the (neo-liberal) globalisation we have experienced over the last three decades.” (That is, since the end of the former Soviet Union.)

In other words, the period that followed the dissolution of the Soviet Union, supposedly based on market mechanisms and the free movement of finance, is over and a new situation is emerging.”

The period of supposedly one globalisation movement fuelled by the US dollar and based on neo-liberal assumptions about development and prosperity has come to an end.

The world of economic activity which now lies under US sanctions is so big that sanctions now threaten the centre of neo-liberalism itself.

Germany is resisting US sanctions on Russian gas, for instance. The global multinationals now have to choose shrinking back to their homeland of origin and finding another home under a different currency from the US dollar.  But it is not likely that a new dominant currency will emerge to play the role which the US dollar once played between 1945 and to-date.

According to Nick Beams in the same article already cited:

“The outcome will not be the establishment of a new global financial system based on another currency such as the Euro, let alone the Chinese yuan.

Rather, the tendency will be towards the division of the world into conflicting currency and economic blocks, akin to those of the 1930s, which played a significant role in creating conditions for (the Second) World War.

The fate of ‘reform’ for small nations

The basic assumption underlying Zimbabwe’s reform and re-engagement programme has been to achieve smooth integration into one global system based on free-flow of capital, free-flow of information, human rights, democracy and mutual respect.  Sanctions have always loomed large against such optimism about integration into the neo-liberal capitalist system.

The world that is emerging from the ashes of the Russian war on Ukraine will not be about smooth integration. Rather it suggests a new scramble for Africa and a new era of brutal re-incorporation rather than integration. This is the issue which Zimbabwe has to ponder. Zimbabwe and its allies need a new strategy to counter the coming re-incorporation.

Claims of international best practices, international standards and the international community were always questionable anyway.  Now we cannot even talk of international best rhetoric.  There are bold and brutal plans for recolonising Africa for its vast resources. The Russian war on Ukraine has exposed the poverty of Europe when it comes to land, energy, food and minerals. Technology alone has not saved Europe from the withdrawal of Russian oil and gas.

The destabilisation of Africa, most visible in the NATO war on Libya, will become a full recolonisation project. Seeds of this appear in Northern Mozambique, Mali, Nigeria and elsewhere.

Dariro as manifestation of strategic thinking