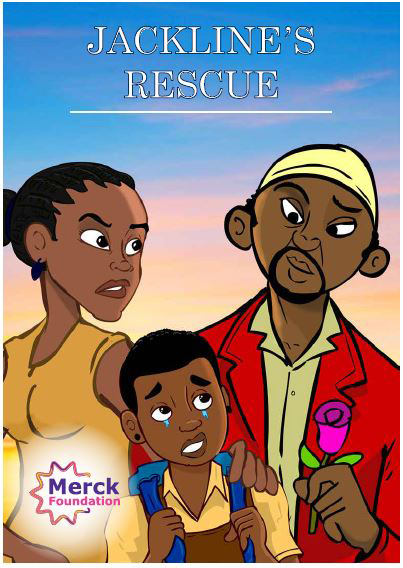 GIRL-CHILD marriages remain a cause for concern in various parts of Africa.

Due to poverty, beliefs and traditions, many societies in Africa continue to abuse young girls and perceive them as brides who can be exchanged for money and dowry.

Such practices have resulted in a number of girls failing to complete their education.

To protect the girl-child, many countries on the continent have, however, enacted laws and policies to eliminate the practice.

Implementing laws and policies which prevent child marriages is a step towards respecting and upholding girls’ rights.

Merck Foundation, in partnership with various African First Ladies, is also playing a part in ensuring the practice of child marriages ends.

Their awareness is rooted in publishing literature and producing music that conscientise people of the effects of child marriages.

Under review this week is another masterpiece of children’s literature produced by the Merck Foundation. Simply titled Jackline’s Rescue, the book is written and illustrated by Jones Abban.

It is a book written specifically for children but carries with it a story that helps both the young and old. In other words, one can say it is a story directed at societies that are not giving children the opportunity to enjoy their childhood and allowing them to choose for themselves who to marry.

On the dangers of child marriage, the writer has this to say:

“Early child marriage is not only harmful to our children’s health and well-being, but also locks the girls’ future in poverty. Without education, our girls’ potential to get good jobs in the future to support their families is reduced

“Early marriage will force them out of education, increasing their risk of ill health, violence and abuse.”

The idea behind the book is for children to grasp the importance of education and know the dangers associated with child marriages.

Jackline’s Rescue is centred on the story of Jackline, a brilliant and bright teenage girl, who is forced into marriage by her parents as a result of poverty.

Despite having her own dreams and wishes, Jackline’s parents marry her off to an older man.

In writing the story, Abban does well in showing targeted readers that poverty, ignorance and selfish reasons see some families forcing their children into early marriages.

Jackline’s parents represent a number of families within African communities who perceive their girl-children as ‘commodities’ that can be sold.

The protagonist is presented as a young girl who, before marriage, is taking her education seriously and even has dreams of becoming a pediatrician.

“Jackline pictures herself in the future, smartly dressed up in a doctor’s uniform and happily attending to mothers and children in a big hospital.

“At a young age, Jackline fully understands that this kind of dream can be achieved only through hard work,” writes Abban.

Like Jackline, many young girls are facing the predicament of being given the burden of taking their families out of poverty through getting married to older men. In some communities girls are not given the opportunity to develop to their full potential and be equal members of society.

In the book, Abban is also stressing that, for a society to develop, it needs input from both girls and boys, therefore, girls should be provided with the chance to complete their education.

Abban clearly highlights how children are affected socially and mentally as they are forced into marriage.

The writer explores the emotions and feelings of victims of child marriages.

“Soon, they were in the big city. 15-year-old Jackline begins her strange new life with her 35 year old husband.

“I cannot believe I’m having to do all this on a daily basis. Cleaning and washing of clothes, ironing, going to the market and cooking for the house.”

In the book, the writer provides readers with solutions when they encounter the same problem as Jackline’s.

Through the help of her teacher, community members and the police, Jackline is rescued from the abusive marriage and is given an opportunity to complete her studies.

Jackline’s teacher, the police, traditional leader and other community members in the story are shown as people who can be on the forefront of changing the belief that girls and women are inferior to boys and men.

Jackline’s Rescue does well in showing that empowering a girl-child is one of the strategies that can be used to prevent or end child marriages.