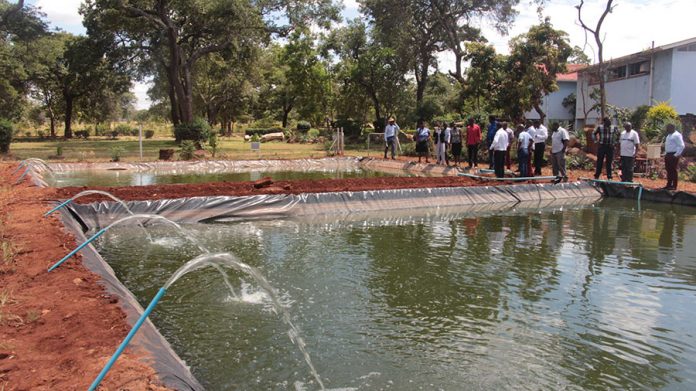 Aquatic ecosystems are also used for human recreation, and are very important to the tourism industry, especially in coastal regions of southern Africa.

The health of an aquatic ecosystem is degraded when the ecosystem’s ability to absorb a stress has been exceeded.

Fish species in Zimbabwe require a healthy and non-toxic aquatic ecosystem to thrive.

A stress on an aquatic ecosystem can be a result of physical, chemical, biological or man-made mechanical invasions and alterations of the environment.

Chemical alterations include changes in the loading rates of bio-stimulatory nutrients, oxygen consuming materials and toxins.

This has now become a concern in many Zimbabwean rural areas where there are rivers, due to the introduction of urban refuse thrown into and disposed in rivers.

Biological alterations include over-harvesting of commercial species and the introduction of exotic species.

There are many examples of excessive stresses with negative consequences particularly in some resort areas near Victoria Falls where tourism is uncontrolled and on the periphery of cities and towns around river bodies where refuse is thrown into the water.

There are three basic types of freshwater ecosystems:

Wetlands: areas where the soil is moisture saturated or inundated for at least part of the time.

Aqua-culture can be a murky and highly risky monetary venture if one does not consult a veterinary- aquarist, prior to undertaking fish farming.

Valuable time and investment capital can be flushed away with diseased fish, infected spawn and the inevitable loss of stock and money.

I know of many Zimbabwean fish farmers in rural and peri-urban areas who have attempted aqua-farming. Many aqua-culture ventures have failed, due to the ignorance of the aquarist-farmer about the many challenges encountered in fish-farming and the high-maintenance regimes demanded for its viability and profitability.

A question I am often asked in the call of duty is: “Do fish get sick?”

Invasive plant and weed species are generally viewed as having a broader range of tolerances (i.e., a bigger bioclimatic envelope) than native or indigenous plant

A shift in temperature, for example, might then have significant impacts on native species, but little impact on introduced species, thereby altering the competitive dynamics between them.

The broad categories of climate change impacts on species composition and ecosystems in Zimbabwe and other parts of southern Africa are gradually becoming better defined, though the full implications of these types of changes, particularly at the site level are still unknown and could be unique in each case.

Invasive alien aquatic weeds species on lakes Kariba and Chivero such as the water hyacinth, is often considered a highly problematic invasive species outside its native range.

Salvinia molesta, commonly known as giant salvinia or Kariba weed after it infested a large portion of the reservoir of the same name, is an aquatic fern, native to south-eastern Brazil.

It is a free floating plant that does not attach to the soil, but instead remains buoyant on the surface of a body of water.

The fronds are 0,5–4 cm long and broad, with a bristly surface caused by the hair-like strands that join at the end to form eggbeater shapes.

They are used to provide a waterproof covering.

These fronds are produced in pairs also with a third modified root-like frond that hangs in the water.

Its infestation of Zimbabwean rivers and dams is of particular concern to fish breeders and river maintenance workers.

Spaghetti weed is an algae which causes the eutrophication of the riverine habitat.

Algae use solar energy to generate biomass from carbon dioxide and are possibly the most important autotrophic organisms in aquatic environments.

Of course, the more shallow the water, the greater the biomass contribution from rooted and floating vascular plants.

These two sources combine to produce the extraordinary production of estuaries and wetlands, as this autotrophic biomass is converted into substances that may be harmful to fish, birds, amphibians and other aquatic species.

Any sedimentation is a threat to aqua-farming in Zimbabwe.

Lemnaminuta is an introduced species of the lemnaoideae family of duckweed known by the common name Least duckweed.

It is the smallest Lemna species.

It is native to parts of the Americas, and naturalised in others; the exact native range is not known.

It is found on other continents as a non-native introduction as well.

The plant’s distribution is ever-expanding.

In many areas it is declared a noxious weed, such as in Belgium.

This tiny plant varies in shape depending on growth conditions.

In the shade it is a single green translucent oval body no more than 2,5mm long, and in full sunlight it generally grows in pairs.

There is a central vein usually visible under magnification and microscopy.

This duckweed grows in slow-moving, calm and stagnant freshwater habitats.

It affects the ecology of its habitat by forming mats on the water surface, reducing sunlight penetration and oxygen exchange-which of course stunts the growth of the fish and can also asphyxiate some river fish species.

An invasive species is a plant or animal species that is not native to a specific location (an introduced species).

Such a species has a tendency to spread to a degree believed to cause damage to the environment, human economy or human health.

While all species compete to survive, invasive species appear to have specific traits or specific combinations of traits that allow them to outcompete native species.

In some cases, the competition is about rates of growth and reproduction.

In other cases, species interact with each other more directly with causing dangerous cross-pollination with local species.

However, the overriding factor is that many invasive foreign waterborne weed species can be toxic and harmful to our water bodies and in particular our indigenous waterfowl and fish.

For views and comments, email tonym.MONDA@gmail.com 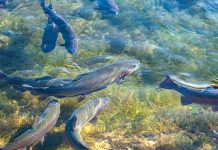 Trout — the rainbows on our mountains