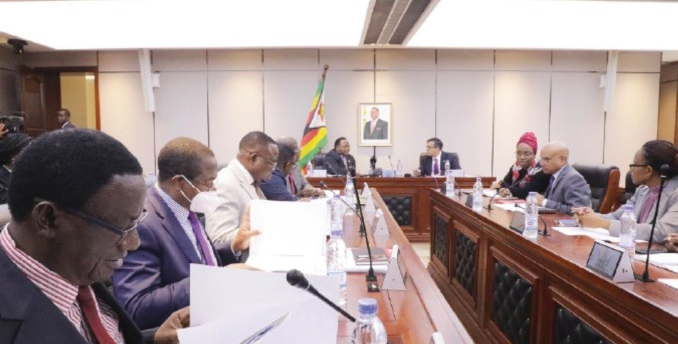 THE most significant aspect about the Commonwealth delegation visit to assess the country’s progress in its quest to rejoin the grouping was that great strides have been made on Harare’s engagement and re-engagement drive.

There, however, continue to be toxic characters like Nelson Chamisa and his CCC who continue to drive a wedge between the country and rest of the world on behalf of their Western masters.

While the Commonwealth spoke glowingly, both publicly and behind scenes, about the direction which the country has taken since the New Dispensation came into office in November 2017, the easily excitable Chamisa began his unfounded rants spewing unfounded allegations about repression in the country allegedly committed by the Government.

Opposition politics has thrived on a dirty partnership with Harare’s marauding tormentors in the West tarnishing the image of the country and presenting it as a pariah state.

For instance, and typical of lackeys, they cannot realise that the illegal economic sanctions they called for and endorse have not only paralysed the economy but affected every household in the country.

With funding continuing to flow from Western capitals, the ugly trend continues with unwavering resolve to bring the country to its knees.

They will never succeed as has been the case since 1999, even the sanctions they called for have not brought the country down as anticipated.

Over the past few months, CCC in collusion with some figures in the so-called civic society, some active while others are said to have been ‘retired’, have been manufacturing what they say is evidence of ‘violence’ against the stuttering opposition party’s members.

The evidence in question is in the form of doctored videos and pictures which are finding their way to the corridors of Washington which they believe will use its ‘influence’ to put the Government on the spotlight through cajoling the AU, SADC and even the UN to condemn a ZANU PF victory in the 2023 harmonised election.

We have in our possession, impeccable evidence of how the videos and pictures are being doctored in an operation being led by a former ZESN employee (name withheld for now) and is based in Mashonaland Central.

And as we head towards those polls, we will be furnishing the public with full details of how the opposition intends to tarnish electoral processes using the doctored videos and pictures to isolate Zimbabwe as was the case in the First Republic.

And Chamisa did not hesitate to confirm his participation in that dirty operation, gleefully leaping to the defence of his ‘comrades’ in the civic society whom he claimed were under attack by Government during his meeting with the head of the Commonwealth delegation, Professor Luis Franschesci on Wednesday last week.

“We also noted the absence of genuine, inclusive and comprehensive dialogue,” Chamisa told the media after meeting the Commonwealth delegation.

What he forgets, which is in both the public and private domain is that there is a platform for dialogue between all political actors in the country called POLAD which he has been avoiding.

Publicly he makes silly utterances against President Emmerson Mnangagwa, the same person whom he wants to engage behind closed doors through the numerous emissaries he has been sending in recent times.

“We made reference to the closure of democratic space through the enactment of repressive and undemocratic anti-people legislation including the PVO Bill, Maintenance of Order and Peace Act and the proposed Patriotic Bill.” said Chamisa

“We highlighted the attack and persecution of civic society including human rights defenders, trade unions, the student movement, teachers, journalists, lawyers, the church, politicians and citizens in general.

“The police have been incapacitated (probably) by ZANU PF and are unable to deal with incidents of incitement to violence by ZANU PF including cabinet members and criminal complaints against ZANU PF members.”

While his insincere harpings were typically aimed at his excitable people, maturity was being exhibited by Prof Franschesci as he concluded his visit last Friday.

Opposition politics, guided by the intrusive West as is the situation in Zimbabwe has become toxic and is driven by malice.

The people in the opposition, led by Chamisa are failing to separate their resentment of ZANU PF with that of Zimbabwe such that they end up being members of the anti-Zimbabwe crusade.

But that will stop soon when they are thumped in the forthcoming elections.

“Zimbabwe is a beautiful country, you should all be proud of your country and keep moving,” Franceschi said.

“I call on the media here that the great responsibility that you have is to move together, to find each other and close that gap that divides you which is a gap of perhaps mistrust, which is not essential.

“It’s a gap of perhaps fallen friendships that can very easily come together.

“You have a beautiful country and we will be so proud to see you back in the Commonwealth and we look forward to it.”

While the opposition continues with its unabated howlers, progressive minds must never the take eye off the ball.