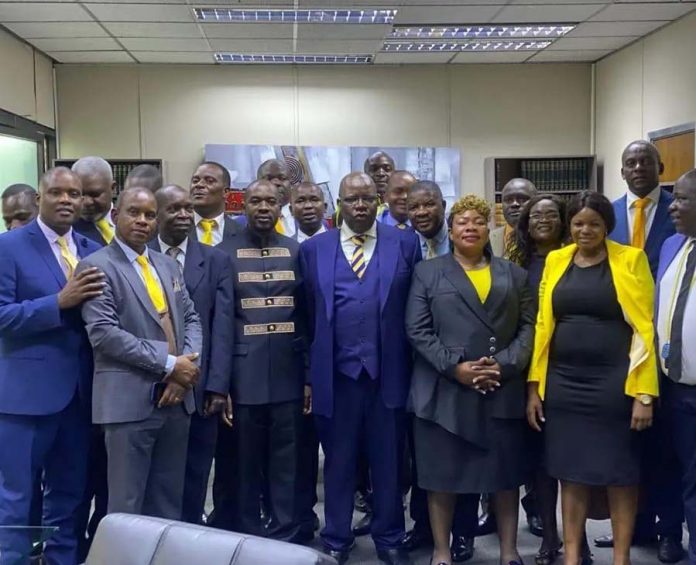 THERE are many things that have been laid bare by the March 26 2022 by-elections, such as the fact that ZANU PF is the Party of choice, but the most interesting one is the bizarre attempt by Nelson Chamisa’s CCC to portray itself as a ‘new’ political outfit in order to erase its recent past of sordid incompetence in the local authorities they have been collectively and effectively running down with their newly found nemesis, the MDC Alliance.

We have written extensively on why and how the so-called CCC is, in fact, old wine in new wineskins.

Before plunging into the depths of the country’s politics, CCC faces the tough task of convincing the masses that they are a new political party.

On the one hand is the fact they are presenting the same old faces and characters who have done a pretty good job of decimating the glitter of our cities and towns.

On the other is the embarrassing fact that while those useless characters are said to be new, representing what they inanely say is the new, they are all smeared with the dirt which is menacingly lurking above their heads from the recent old from which their roots are firmly anchored.

The choices for CCC are grim whichever way one looks at it.

We have also gone to great lengths to explain to the voter that unless this ‘new’ outfit acknowledges the embarrassing destruction of our cities and towns for over 22 years, then there is nothing for them in the ballot.

March 26 2022 by-elections have since vindicated our poignant assessment.

The 2023 harmonised electios will also resoundingly validate this critical analysis of events as they have unfolded and as they will unravel in due course.

But just as the voter saw through their naked lies, not many are convinced the CCC is a new political entity, a new kid on the block as they have been desperately trying to tout themselves to the fed up masses.

The facts are there to buttress the inescapable reality that there is indeed nothing new in the ‘new’ that Chamisa and his cohorts-of-convenience are, and were, pretty much part and parcel of the old that they are frantically trying to abandon in their hour of desperation.

Douglas Mwonzora, the MDC Alliance leader, finds himself out in the cold, having had a nasty brawl with his colleagues who now call themselves CCC over ownership and control of the name MDC which has, since its ill-fated September 11 1999, disintegrated into innumerable fragments, all standing for and representing one thing — selling the country to its erstwhile colonisers.

In short, and put simply, CCC is yet another faction of the MDC.

It is a vital cog in the destruction of the local authorities.

What CCC has simply done is change colours from red to yellow while retaining majority of the players in the MDC-T or MDC Alliance, depending on political mood, particular day or time.

The players, the politics and the agenda are still the same.

They are wont on carrying from where they left before they started portraying themselves as a new entity and will continue destroying the local authorities.

This is, of course, not withstanding the fact that, as was the case with his mentor, the late MDC founder Morgan Tsvangirai who stood for nothing except furthering the agenda and interests of foreigners, Chamisa has typically followed suit, openly admitting at the Zimbabwe Grounds in Highfield that his ‘new’ party does not have an ideology.

That once-in-a-while entanglement with the truth is what made it easier for the voter to make informed choices in the March 26 2022 by-elections where ZANU PF embarked on a fruitful fishing expedition in the MDC- CCC pond.

Never mind the frivolous attempts by woefully out-of-sorts CCC propagandists to sell to the enlightened voter and world that their party ‘won’ 19 out of 28 parliamentary seats on offer.

Those seats belonged to MDC-CCC and what has not escaped the attention of those who are blessed with the gift of discernment is that ZANU PF managed to wrestle two crucial seats from the ones held by the opposition.

Not helping matters for CCC is the open endorsement, by the whites, of Chamisa’s party.

We have seen the likes of Kate Hoey, one Lord Oates and the British House of Commons giving thumbs up to their ‘new’ puppet.

The US has refused to be left out, throwing the usual brickbats against the Government of Zimbabwe and making their usual inane demands for so-called reforms.

Siezed by the endorsement from his masters, Chamisa then laid bare his intentions of returning the country to them on more than two occasions.

Therein lies yet another conundrum.

CCC comes across pretending to be ‘new’ but still possessed of the sellout tag that has been the hallmark of the MDC throughout its wobbly existence. How then does Chamisa shed off that tag in order to be the real new?

We will all depart the earth searching for an answer to that begging question.

When all is said and done, the March 26 2022 by-elections have given ZANU PF a sound footing in its quest to rescue the urban voter from continual abuse by the opposition in its numerous formations.

The identity issue is very much Chamisa and his cohorts’ problem.