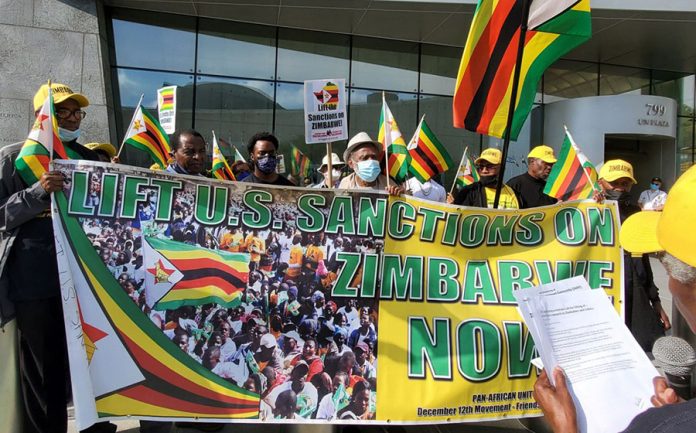 THE amplified chorus for the removal of Western-imposed illegal economic sanctions on Zimbabwe by the world would have, under normal circumstances, cajoled countries from that part of the world to have a relook at the embargo but because it was designed to restore the pre-independence skewed order, the West’s hostility towards Harare will last longer than anticipated.

In recent weeks, there has been intensified condemnation of the widely discredited embargo by SADC and global leaders who have previously been vocal on the impact of the embargo and have also been severely affected by the same.

Those sanctions have been yet another exhibition of the recklessness of the West’s foreign policy which thrives on destabilising perceived weaker nations and installing inept governments of their choosing.

Put in motion on December 21 2001 by the US and on February 18 2002 by the EU over the land reform of 2000, the sanctions which have ripped the country’s economy apart were initially created to isolate Harare from the world while being used by the West to aid the opposition’s rash but doomed pursuit of power on their behalf.

“I hope that soon the people of Zimbabwe again will enjoy political and economic freedom,” said former US President George Bush while announcing the imposition of the sanctions.

The import of that seemingly innocuous statement was that regime change was the ultimate objective of the sanctions.

Over the years, the world has seen through the West’s shameless lies that the sanctions were imposed because of allegations of human rights violations by  the ZANU PF Government and that they are ‘targeted’ at a few individuals in the country.

But the damage wrought by the embargo on the economy is there for all to see.

Government says the country lost a staggering US$42 billion in potential revenue, as at 2019, due to the sanctions.

A September 27 2021 report by Responsible Statecraft exposes the lie that sanctions are ‘targeted’.

Between 2003 and 2008 more than 180 Zimbabwean individuals and businesses were put under sanctions by the Bush administration, the report says.“In 2008, the Treasury Department’s Office of Foreign Assets Control, or OFAC, was given the authority to place sanctions on additional individuals or entities associated with the Government of Zimbabwe,” reads the report in part.

And the opposition in the country, naïve and clueless as ever, shamelessly and openly endorse those sanctions.

On September 1 2022, Botswana President Mokgweetsi Masisi, who was in the country to officially open the 112th Zimbabwe Agricultural Show (ZAS), drew the ire of the opposition when he said the sanctions were not only affecting Zimbabwe but the whole SADC region.

“Botswana continues to call for the removal of sanctions (on) Zimbabwe,” he said.

“These sanctions must go. They must go forever.

They are also sanctions against Botswana.

If Zimbabwe is sanctioned, Botswana is also sanctioned and we cannot like that.

So tell your friends that we don’t like the sanctions.”

President Masisi would repeat the same message later that day after a closed door meeting with President Emmerson Mnangagwa at State House when he revealed that he told EU leaders to have dialogue with Zimbabweans on the issue.

“We once had the jargon of targeted sanctions,” he said.

“There are no targeted sanctions.

I had an intimate discussion with the leaders of the EU.

I said to them, if you have complaints about what Zimbabwe is doing, you need to sit around a table and talk to Zimbabweans.

We are calling on the international community to remove sanctions imposed on Zimbabwe, they are hurtful, they even mitigate against the realisation of UN targets of 2030.”

There has been no let off for Western leaders in recent times over the sanctions.

Recently, South African President Cyril Ramaphosa reiterated the message that the sanctions were not only affecting Zimbabwe but the SADC region during a meeting with US leader Joseph Biden at the White House.

SABC broadcaster Peter Ndoro revealed on Twitter that President Ramaphosa had laid siege on the embattled Biden whose glaring leadership qualities and gaffes have been there for all to see since assuming office late last year on the sanctions issue.

“Meeting with President Biden, President Ramaphosa raised the issue of #sanctions on #Zimbabwe. He explained to President Biden that Zim sanctions affect other countries in the region as economic migrants are forced to leave #Zimbabwe in their droves to seek economic opportunities,” he said.

But true to his abrasive form, Uncle Sam had, on the eve of the meeting, added Zimbabwe Republic Police Deputy Commissioner-General Stephen Mutamba to the list of designated individuals for ‘allegedly stifling democracy in the country’.

According to Executive Order 14369, issued recently, Commissioner Mutamba was added, “…for his actions that undermine Zimbabwe’s democratic processes and institutions.”

There were loud cheers from US Senator Jim Risch (R-Idaho) who said the addition of Commissioner Mutamba, “…is good, many key officials responsible for undermining Zim’s democracy remain missing.

“Biden should use his meeting w/@CyrilRamaphosa to urge the gov’t of #SouthAfrica to end its blatant misinformation campaign about US sanctions & use its regional leadership to support democratic reforms in #Zimbabwe,” he said.

While the West continues to dig in on the sanctions issue, Zimbabwe ably supported by its sound economic policies as well its solidarity with friendly nations, continues to rise.

This means that those who endorse the sanctions within our borders must face the full wrath of the law.