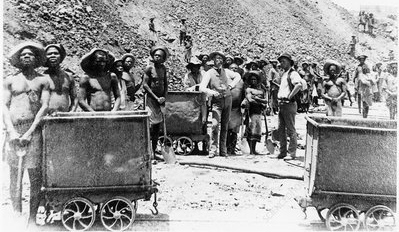 ZIMBABWE is acknowledged for its vast mineral wealth which overshadows its other resources.

In fact, beneath the surface of Southern Africa’s diverse landscape lies the richest mineral treasure trove.

Almost every precious metal, mineral and stone known to man has been found in deposits varying from mere traces to large quantities of incomparable value.

Gold, has been the allure for man since antiquity.

In the ancient world, Nubia, from where the Korekore people migrated in the 4th Century, was a major source of gold.

Nubia was also a major manufacturer and exporter of iron.

Gold, mined east of the Nile in Wadi Allaqi and Wadi Cabgaba, was a major source of Kushitic wealth and power.

During the Medieval Age, Africa, including MaDzimbawhe, was a major supplier of gold in world trade.

The Swahili traders in East Africa were major suppliers of gold to Asia in the Red Sea and Indian Ocean trade routes.  A large portion of this gold came from the  Munhumutapa Empire

Over millennia, alluvial gold, found all over the world, had been a traditional source of wealth.  It is gold that is found ‘loose’ on this planet, usually in the form of pieces as fine as flour, up to nuggets weighing a few grams or, very rarely, up to a few kilos.

This is raw, native gold that was long ago loosened from the ore which once contained it, usually by the action of wind and water.

Africa, replete with rich veins of gold has mined this precious metal from the fabled Ashanti goldfields of the Gold Coast, in Africa north, to the renowned rich gold plateau located between the Zambezi and Limpopo Rivers, in south-east Africa, which offered abundant opportunities for human settlement.

Its grasslands made excellent grazing for cattle; the tusks of dead elephants provided the basis for a trade in ivory.

This was the legendary Empire of Munhumutapa, where gold was mined on an epic scale.  A seam of gold, running along the highest ridge (of today’s ruins) shows signs of having been worked in at least four places before 1000 AD.

Iron was used for making hoes, arrows, spears, swords, axes, knives and other implements while  gold, copper and ivory were used for ornamentation and trade.

Long-distance trade took place mainly in State-regulated markets such as Sena and Tete as well as the inland markets of Masapa, Luanze and Bokoto, with prices, weights and measures of natural resources of commercial significance, such as gold, ivory and copper, being determined by the State which also controlled their exchange for foreign items.

Portuguese as well as Arab and Swahili traders brought cloth, glass beads and other items from India and elsewhere to trade for gold, copper, iron and ivory.

Mozambique was the major entrepôt between India and Portugal.  During the second half of the 16th Century, the Portuguese traded guns for goods such as gold, ivory and agricultural produce.

On arrival in the 1500s, Portuguese interests in the Munhumutapa Empire were mainly centred on the fabulous stories about the abundance of gold, silver, copper and ivory that were popularly advertised in Portugal.

Another legend held that the Munhumutapa’s fabled royal palace at Mount Fura consisted of “…a great variety of sumptuous apartments, …  floors, beams and rafters all either gilt or plated with gold curiously wrought, as are the chairs of state, tables, benches …  The candle-sticks and branches made of ivory inlaid with gold, hang by chains of the same metal, or of silver gilt…”

Under the divine nature of his kingship, the Mwene Mutapa was “…Lord of the sun and moon; king of the land, the rivers and forests, and conqueror of enemies.”

Natural resources were believed to have been created and bestowed by Mwari, and could only be exploited with the approval of the Mutapa — Mwari’s earthly representative and custodian.

Moreover, he had the right to confiscate any minerals mined without his permission and sentence the violator.

The miners were rewarded with contributions of animals, foodstuffs, cloths and beads.  This way, he was able to regulate the volume of local products exported and hence maintain a favourable balance of trade at favourable exchange.

In neighbouring South Africa, the era of modern commercial mining has its roots in the copper-rich region of Namaqualand in the Northern Cape.

Here, the first mine was established in 1852, on a farm called Springbokfontein Farm.

Although much of the copper mining activity has now ceased, it is the site of the town of Springbok today.

While Namaqualand can be considered the cradle of commercial mining in South Africa, the real catalyst of the mineral revolution, on which the country’s modern industrial economy was built, was the chance discovery of diamonds in the Northern Cape, in South Africa, in the late 1860s.

A young boy named Erasmus Jacobs lived with his family on a farm in Kimberly, near the Orange River in South Africa.

Erasmus and his sister used to pick up pretty stones along the banks of the river and play with them.

In 1866, they found a small white pebble which Erasmus showed to his father, who, in turn, showed it to a neighbouring farmer named Schalk van Niekerk. Van Niekerk found the stone intriguing and offered to buy it from the Jacobs’ family, who simply gave it to him without payment. They never believed it was a diamond, or that it could be valuable.

The ‘small white pebble’ which Erasmus found in Kimberly’ was indeed a 21.24 carat diamond and was named the ‘Eureka’ diamond.  It is the single most important diamond in the history of South Africa.  After its discovery, Kimberly was overwhelmed by people from all over the world seeking to make their fortunes.

The discovery of the 21¼ carat Eureka diamond in late 1866, and the 83½ carat diamond in 1869, sparked the country’s first great mineral rush, with more than 5 000 diggers rushing, first to the Vaal River and then to Kimberley.

Thousands of men rushed from all parts of the world; each bought little claims and began to sink shafts.

The rock ‘diamond’ became the new source of hope and Kimberley became the world’s diamond capital.  The diamond rush that followed played an integral part in transforming South Africa into a leading industrial nation.

De Beer was a Boer farmer in Southern Africa whose barren farm had suddenly revealed that diamonds were beneath it.

He soon sold his land and the diamond rush was on.

In 1888, the various mining groups decided to join forces and one of the world’s leading diamond mining groups was formed, known as De Beers Consolidated Mines.

When the newly discovered 83½ carat diamond, which was subsequently known as the ‘Star of Africa’ was held up before the House of Assembly in Cape Town, the colonial secretary declared: “Gentlemen, this is the rock upon which the future success of the colony will be built.”

By the time mining activities at Kimberley’s Big Hole stopped in 1914, roughly three tonnes (2 722kg) of diamonds had been extracted from 22,5 million tonnes of excavated earth.

The Big Hole produced a phenomenal 14.5-million carats, among them the famous 128.53 carat Tiffany Yellow Diamond.

The Eureka diamond changed hands many times before it was finally purchased by De Beers who donated it to the people of South Africa.

The Eureka diamond can now be seen on display at the Kimberly Mine Museum in South Africa for all the people to admire and enjoy its brilliance.

Apart from the Big Hole diamond operations in Kimberley, there were the Jagersfontein Big Hole Open Mine in the Free State, the Lichtenburg Diggings in the North West and the still-operating Cullinan Diamond Mine north-east of Pretoria.

While the history of gold mining in South Africa is often presumed to postdate that of diamonds, the precious metal was, in fact, discovered, and the first mine established at roughly the same time as the diamond rush in the closing months of 1870, on the farm Eersteling, located about 40km south-east of Polokwane.

Eersteling was followed by the more significant gold discoveries, principally at Pilgrim’s Rest in 1873 and Barberton in 1885.

But the significance of the then Eastern Transvaal gold rushes pales in comparison to the Witwatersrand Basin, from which one-third of the world’s entire stock of gold has been sourced.

In February 1886, the world’s largest gold strike was made on the Witwatersrand in Transvaal.  It brought about the birth of Johannesburg, South Africa’s largest city and known to most Africans as eGoli — place of gold.

It led not only to wealth but also to an influx of ‘uitlanders’ or foreigners in Afrikaans. In a few years, the gold rush created such a rapid demographic change that, by 1896, the little village of Johannesburg had become a city with 102 000 inhabitants who had come from nearly every country on the face of the earth —– outnumbering the Boers and widening South Africa’s racial divide.  Segregation was applied by means of ‘petty apartheid’.

Discovered and pioneered by organised diamond mining capital, the Witwatersrand gold-mining industry developed at an unparalleled rate despite numerous challenges, including the considerable depth and pyritic nature of the conglomerate reefs, the very low grade of the resource, the high costs of production and the enormous labour requirements of the mines.

Deep mining, which is responsible for South Africa’s vast gold production today, was not started until the late 1800s. Gold output from the Witwatersrand’s 53 operating mines peaked at a phenomenal 1 147 tonnes of gold in 1970.

With the discovery of gold, economic power shifted from the Cape Colony to Transvaal.  England erroneously believed that the conquest of Transvaal, after a short confrontation, would transform it into a British colony in which the Boers would be swamped by British immigrants. Consequently, England started new difficulties for the two small Boer republics and began to interfere with their internal affairs while making unacceptable demands.

These actions led to the second Anglo-Boer War, which began in 1899.

The exploitation of the country’s vast iron-ore resources in the North West and Northern Cape provinces and the establishment of a State-controlled iron and steel industry in the 1920s facilitated the growth of a secondary industry in South Africa, which enabled the country to develop into the most industrially self-sufficient country in Africa.

In the latter half of the 20th Century, the South African mining industry underwent considerable diversification with the growth of new sectors such as uranium, chromium, vanadium and manganese.

The precious metal, platinum, was discovered in South Africa in 1924, but it was only in the early 1970s that South Africa’s platinum sector began to experience significant growth.

While there are no tourist attractions showcasing the history of platinum mining, the landscape surrounding Rustenburg in the north-west is littered with still-operating platinum workings.  Platinum now constitutes one of South Africa’s leading minerals.

South Africa, after more than 160 years of commercial enterprise, still has one of the most diverse and important mining industries in the world.

Dr Tony Monda holds a PhD in Art Theory and Philosophy and a DBA (Doctorate in Business Administration) in Post-Colonial Heritage Studies. For comments e-mail: tonym.MONDA@gmail.com