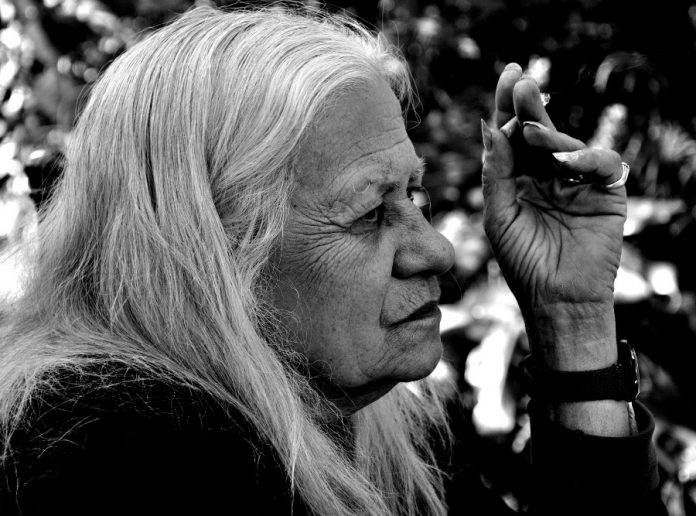 I had just returned to Zimbabwe, following the completion of my Bachelor of Fine Arts Degree, specialising in Art History, Criticism and Philosophy.

Coincidently, she had returned from attaining her post-graduate ‘Perfectionment Artistique’ – the equivalent of a PhD, from L’Ecole Superieure d’Art Visuel in Geneva, Switzerland, awarded to Helen for Printmaking and the improvisation of materials, pigments, colour and painting.

As she was a specialist in printmaking, I was fortunate to receive extra tutorials in printmaking; lithography, wood cuts, linocuts, etchings, monotypes and screen prints from Lieros.

She also purchased several of my prints which she described as ‘unique and formidable’.

Since then, we met regularly at her home or the gallery, given we both felt strongly about the development of art in Zimbabwe. We exchanged thoughts, ideas, techniques and criticism over many cups of lemon tea, or her sweet, strong Greek coffee and cake.

Her carrot cake was one of my favourite cakes.

Helen understood the status and value of the art object beyond its monetary value. For her, the roles of the producer, art critic, lecturer, collectors and government cultural administrators were a symbiotic collective whose co-operation was crucial to the development of art.

She viewed Art as: “… a unique national expression and a developmental investment in the ideology, culture, traditions and new civic aspirations of a people, that gives the Zimbabwean artist a sense of national responsibility, purpose, meaning and identity in society.” (2017 Helen)

She also understood and acknowledged the importance of the art critic.

In 1992 when I attained a USIA — Young African Leaders scholarship to study Art Criticism, Art History, Archeology and Law in six States in the US, she was instrumental in its facilitation and administration. As a result, I became the first internationally trained African art critic in Zimbabwe, accredited by several World art bodies.

Born in 1940 in Gweru, Zimbabwean master artist Helen Lieros was 15 years-of-age when she studied art and music; she specialised in piano compositional studies.  This early grounding in classical music and art reflects in the figurative lyricism and colour harmony, dissonance and linear rhythms incorporated in her paintings.

In 1959, at the age of 18, Lieros was awarded a scholarship to study art in Geneva. A second scholarship was awarded to her in 1962, when she studied History of Western Art and Italian Renaissance Art in Florence, Italy, and the practice of frescos and mural paintings.  She specialised in ‘Bueno Fresco’ – a system devised by Michelangelo, whereby one paints on dry wall plaster. At the same time, she studied ‘Fresco Secco’ – techniques she honed in later years and applied to her many mural commissions.

On her return in 1964, she taught art at Chaplin High School in her home town, in the Midlands. After 1965, when Ian Smith had declared UDI and sanctions were imposed on Rhodesia, Lieros defiantly fraternised with, and encouraged African artists from all walks of life at a time when the ‘colour bar’ was an institution and such fraternisation was illegal and frowned upon.

At Independence, she celebrated the freedom of Zimbabwe in a metaphoric painting that juxtaposed religion with politics titled: ‘The Rise of the Jongwe‘.  The understated painting with an African crucifix in the background and a cockerel in the foreground alluded to Zimbabwe’s sacrifice for freedom, for which she won the President’s Award of Honour for her consistent artistic excellence and outstanding dedication to the development of vistual arts in Zimbabwe.

A towering figure in visual arts and culture of Zimbabwe, Helen Lieros was a mentor and mother to many generations of artists, particularly African artists from humble backgrounds. Together with her husband, the late Dereck Huggins, she established the first private multi-racial gallery in the early 1970s, during the struggle for independence, when Rhodesian race segregation and intimidation was at its height.

During this period, indigenous African expression was either stifled, censored, ridiculed or viewed suspiciously by Rhodesian government security agents.

Lieros was a painter of seminal importance who was instrumental in the development of 21st Century modernism and its attendant neo-African expressionism in Zimbabwe.

Her own body of works was an eclectic, yet highly personal idiom absorbed from a variety of visual and historical sources that embraced her African and Greek roots. African antiquity, masks and artefacts, Byzantine art, religious Greek orthodox iconography and imagery inspired by Western modernism — contextually and technically, absorbed from her trips to Europe during her scholarships to Switzerland and Italy and other major world art centres — formed the basis of her visual vocabulary.

Dr Tony Monda is an independent Zimbabwean socio-economic analyst-consultant. He is currently conducting veterinary epidemiology, agro-economic and food security research in Zimbabwe and Southern Africa.  He holds a PhD, DVM and a DBA. E-mail: tonym.MONDA@gmail.com