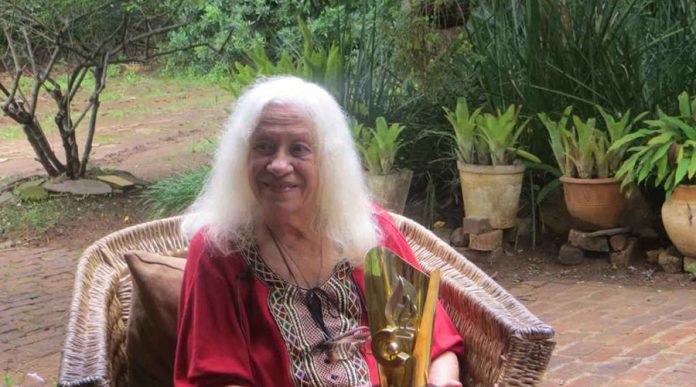 AS a Western-trained artist, Helen’s rejection of the representative naturalism of Western art in favour of African-centred subject matter was fueled by her imagination and executed in an expressionist style.

The energy, form and vitality of African ethnographic art, especially notable in her sketches, prints and etchings, imbued her work with an unmistakable African signature.

Lieros’ two-dimensional artworks are often introspective in mood and include some powerful and intense mindscapes with colour derived from the stark natural environment of the land.

Her paintings show a painstaking analysis of colour in which inharmonious primary colours are juxtaposed in a complementary scheme.

Over the years, she developed conceptual semi-abstract style of paintings of great strength with purity of colouring and a sharpness of handling that demonstrated her technical skills.

Her fiery palette of primary colours, tonally subdued and emotionally mellowed, draws the viewer to contemplate and meditate on the mood set in the paintings.

Her rigorous analysis and use of structure in her abstract work made her the Mother of Modern Painting in Zimbabwe.

Following the country’s attainment of independence in 1980, Lieros’ work became an unapologetic defence and justification for Zimbabwe’s war of liberation.

Her series of works celebrating independence are testimony from one who had lived and worked through the extraordinary, repressive, racist Rhodesian era.

Works such as ‘The Rise of the Jongwe’, ‘New Dawn’, ‘Pamberi’ and ‘Independence’ testify to her love for her country and the people.

In the mid-1980s, her paintings of the dust, the dry veld and dead cattle capture and record the first severe drought experienced in the country following independence.

Although set in an irrational expansive dream-like landscape, with protruding cattle skulls, Helen, with her soothing colour and form, had a way of making natural calamities seem acceptable, turning catastrophe into a beautiful contemplative work of art.

The gravity and grace of the rugged landscapes and mindscapes of the Zimbabwean geographical vista are captured in textured form and grained collage in her earthly palette.

In many ways, she resisted fads and persisted in her sombre, stylistic manner to create handmade art that is meticulous in technique, serious in approach, conceptually poignant and unique in provenance. Although old-fashioned, she encouraged original non-Western traditional experimental modes of expression in the work of young artists.

Movements, such as the indigenous l’Art Trouve (found objects), had their art promoted by Gallery Delta from 2001 through a series of annual exhibitions titled ‘Redefinitions’that she believed had “…more authenticity, originality and relevance to contemporary Zimbabwe.”

While she embraced new media such as installation, performances, video-art, electronic art, digital media and happenings of young artists, she was averse to the transience and ‘bubble gum’ quality of new electronic art.

She would often say to me: “My son Andoni (Greek for Tony), nothing beats the blessing of the hand and the gift of sight — true art lasts more than a lifetime.”

Lieros rejected the ever-changing fads and fashion of electronic Western neo-conceptual art, labelling it “…the death and graveyard of art.”

The profundity of her statement is fully revealed in her last major public commission – the ‘Maputo Frescoes’ — she executed in the Greek Orthodox cathedral of the Archangels Michael and Gabriel in Maputo, Mozambique, carried out over a period of years beginning in 1996-2002 and 2008-2009 and completed in July 2013.

The frescoes have the introspective and enigmatic quality typical of Lieros’ oeuvre.

The astonishing foreshortenings of Biblical figures are set stark in a receding perspective that illustrates an ingenious technical manipulation of pictorial space.

Her febrile style luminously reflects the atmosphere of intense religious zeal and meditation.

Here she employs an eerie, radiant sepulchral lighting which imbues her work with a dramatic urgency and mysticism.

Art historian and critic, Jean-Luc Daval, in Geneva, said about her work: “Although people are willing to accept that the most important international events can take place anywhere in the world, they might be inclined to doubt the art critic who claims that painting is experiencing a renaissance in a modest church in the capital of Mozambique in Africa … and yet, in the Church of archangels Michael and Gabriel in Maputo, under Helen Lieros’ brushes, painting is rediscovering the demands of representation, the narrative possibilities of colours within a genuine space which appeal to all the senses at once. … most significantly, she is writing a new chapter in the history of painting by challenging Western tradition’s ways of seeing, living and thinking; this is developing within a culture that draws from many sources – a shared culture measured on a global scale.”

Besides her monumental last works in the Greek Orthodox Cathedral in Maputo, Mozambique, other important works of art and commissions can be seen in the Stanbic Banking Hall, Second Street Extension, Harare; the Greek and Hellenic Clubs in Harare; the Cabinet des Estampes and the Centre Genevas Pela Gravure, Geneva,Switzerland; Wilfredo Lam Museum, Hanover, Cuba; the Greek Orthodox Cathedral, Harare; the International Museum of 20th Century Art, UNESCO Headquarters, Paris, and State House in Zimbabwe.

Quintessentially African in style as well as Zimbabwean in identity and content, Lieros’ work embodies the austere simplicity of classical African art, the clarity of Byzantine pictorial discipline and the complexity of modernist form.

Her signature African masked faces always appear in her many lucid drawings, etchings, prints and studies of human and animal forms.

Her remarkable classical drawing skills are seen in her numerous sketchbooks of preparatory drawings and studies she carried out prior to undertaking the painting of her commissions.

The industrious artist boasted 54 years of artistic production and excellence, from 1967 to 2021.

Her work overshadowed Western gender presumption in that her art eclipsed the work of many male artists in the country due to its timeless quality, innovation, context, magnitude and national relevance.

A radical re-examination of her artworks reveals a broad cultural aesthetic and socio-political significance in the unacknowledged space of critical discourse in the visual arts of Zimbabwe.

The power of her work destabilises the ‘ready-made’ Western assumptions of oppressed African women.

According to the late Rose West, former curator and acting director of the National Gallery of Zimbabwe (1990-1997)“Helen Lieros is always searching for effective ways to expand her visual horizons, always experimenting, discovering new techniques and constantly striving for perfection.”

Lieros’ works are in the Permanent Collection of the National Gallery of Zimbabwe and in prestigious art collections worldwide. Over the years since we met, I have been the fortunate recipient of several of her prints, etchings and drawings as gifts (the last one in 2017) – usually with a note that read: “To Andoni for the love of art.”

Athenian Art critic Anna Lazou from the University of Athens, writing on Helen’s last commission remarked: “The vivacity of the work of art compared to mere doctrines or political ideologies raises our consciousness to God…. Instilling in us the faith in God, the love and beauty of the soul through the creation of harmonious figures, equilibrium of shapes, colours and volumes.

The power of Helen’s work passes beyond the bounds of the beautiful building of the cathedral and lays a seed with its own energy, in order to grow and blossom throughout society …”

This I believe to be true of all she did.

This article is not an obituary, but a celebration of the life of one of Zimbabwe’s most dedicated, illustrious and talented artists.

Lieros, who has been a professional artist for most of her life, joins the ranks of great historical painters, taking a step closer to the giants of world art, with her concrete expressions and cultural solidarities between the communities in Zimbabwe and the rest of the world.

The Greek community, the arts and cultural sector, education sector, the diplomatic sector and finally all the visual artists of Zimbabwe are united in their sadness and bid our last farewell — but will for long honour and recall her generosity of heart, mind and spirit as well as her immense artistic and cultural contribution to Zimbabwe.

She has left an indelible and venerable legacy of art and culture on our African soil.