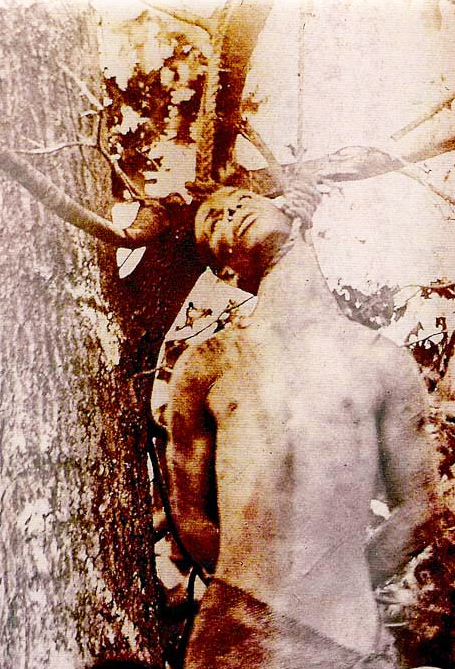 FRANK EMBREE, in Missouri, US, in 1899, was stripped naked and whipped over 100 lashes while handcuffed — and then paraded.

He was publicly castrated and died a horrible death though he maintained his innocence. His pictures, shortly after being whipped and before being castrated, were sold as postcards afterwards.

Before dying, the crowd would make sure the victim suffered as much pain as possible. Guns were rarely fired in such cases for they would cause a quick death.

The fire, if used, was controlled and, if too consuming, the victim was briefly pulled up by a rope.

Some applied pepper to the eyes of the restrained victim as was the case with Richard Coleman of Kentucky in December of 1899 as he was being burnt to death.

Descriptions of the divulging of the flesh would be tossed around while the crowd made noises of excitement.

Oil was used to make the victim flammable and the smell of burnt human flesh did not bother the white mob. Upon the victim’s death, the crowd would rush to the corpse to cut pieces of his bones, teeth, limbs and organs as souvenirs.

It is quite possible they ate some of these body parts because they liked them charred. Or maybe they needed them dried in order for them to be storable for a long time.

However, the fact that they made some blacks eat their own testicles, which they occasionally grilled, suggests that they were potentially cannibalistic.

These souvenirs were often picked by children who would sell them to adults over the next few days.

Children would also participate in keeping the fire ablaze so as to totally consume the remains of the lynched and deceased.

What type of adults were to grow from such a stock.

At the end, only the charred skull of the victim would remain, as was the case with Jesse Washington of Texas, lynched in 1916.

Other lynchings, which did not incorporate fire, ended with a lifeless, hung and pierced body with missing organs, as was the case with Neal.

In such cases, the mob would disallow anyone, including the authorities, to remove the corpse for days, so as to send a macabre message to the blacks.

Lynchings that ended too quickly were deemed unsatisfactory while those that were slow and horrendous satisfactory.

The lynchers would not be apprehended, even though their identity was known, because most lynch mobs did not hide behind masks.

The authorities would often sympathise with the lynchers, hide their identity and desist from prosecuting them.

Some state governors would make reckless and insensitive statements such as: “Lynching well done.” and, to this day, no individual or group of whites has ever been charged for leading or participating in a lynching.

Some of the reasons which led to black people being lynched were miniscule, for example wallet theft.

At times, the victim was proven innocent but because of the unavailability of a guilty party, the whites would not be denied their lynching.

The blacks of this town comprised surgeons, pilots and lawyers, among other trades. They owned hospitals, air strips and law firms of their own which employed blacks from as far off as New York.

They dressed better than the average whites in their neighbouring community and owned superfluous possessions such as pianos.

One day, a young blackman tripped in an elevator and leaned to grab a white woman to retain balance. Startled, the woman screamed, leading to the boy fleeing in panic.

Rumours began spreading from that office building that a white woman had been fondled by a blackman. Before long, it was rumoured that it was a rape case.

The whites of that community and smaller towns around came together and went to the station to which the boy had run to for succour and to clarify his case.

Blacks ran to the station, armed, so as to protect their kinsman who they knew would be lynched in the fashion of many other blacks of that era.

A scuffle ensued; shots were fired and all hell broke loose. The whites began raiding every black home and business, killing prominent members of the black community as well as shooting at fleeing patients and mothers carrying their young. They even killed uniformed blacks who fought for the south during the civil war.

Whitemen, women and children entered black homes and looted them. They set them ablaze after taking clothes, furniture, curtains, utensils and food.

Blacks who fled were ambushed and shot to death while those assaulted in their homes were burnt to a crisp.

This was a mass lynching. Each blackman or woman had to face a score of armed whites and God knows the type of treatment they had to endure before their deaths.

Mass graves were dug speedily in every place that numerous murders occurred. To this day, many of the dead have not been accounted for and no one has been tried for this horrible crime against humanity.

The aftermath involved the land being resold to whites while blacks could not afford them because they had lost their fortunes and also because the houses to be built from then onwards were required to be fire resistant.

What makes matters worse is that the accused boy was declared innocent by the white girl. The only thing these blacks died for was being successful and prosperous whilst the former slave masters were failing to cope.

White Americans had been disenfranchised by the First World War involvement. Taking their economic frustrations out by lynching a whole community of blacks and robbing them is just more evidence that the whiteman is more predatory and savage than any other race or creature that the world has yet encountered.

Yet their crimes are written out of history.

If what happened in Tulsa, Oklahoma, happened in any African nation, it would be called a genocide and movies would be made of it for generations to come.

Yet the lynching of blacks in the past and present takes place without the perpetrators facing any legal accountability.

Though the greater majority of lynch victims in the US were black males, it should be noted that black women were not exempt from lynching. In fact, an excess of 200 black women were lynched during this dark period of history.

For example, in Oklahoma, in 1911, Laura Nelson was lynched along with her 14 year old son for shooting a lawman in defence of her son.

The white mob of 40 raped her in turns in front of her son before hanging both of them under a bridge for hundreds of people to see. The pictures of Laura’s lifeless body were used on postcards. Her son was also sexually abused as he was left hanging pants down. It is believed he may have been forced on to his mother during the ordeal.

In like manner, Mary Turner of Georgia was lynched in 1918 while carrying an eight-month pregnancy. Her alleged crime being complaining about the lynching of her husband that had taken place the day before.