Home Columns Trout — the rainbows on our mountains 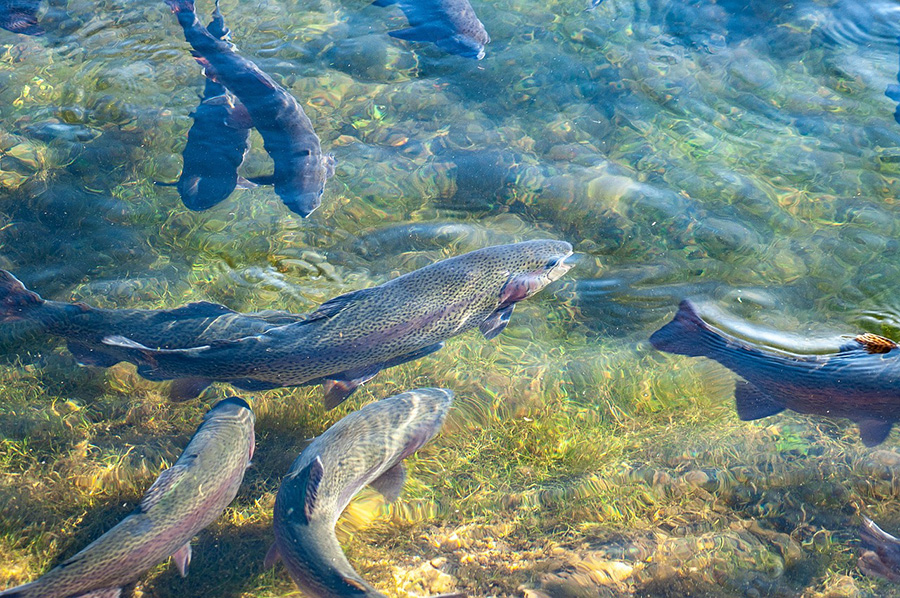 TROUT farming has an interesting history in Zimbabwe.

Once a major export earner for the fishing sector of Zimbabwe, exports of Rainbow trout (onchorynchus mykiss) have since declined.

Fish from rivers and pans made a regular but small and important contribution to their diet.

The Zambezi River system contains about 340 known species of fish; ranking equal to the Nile and second only to the Congo River system with 600 species.

However, not all, such as the mosquito fish introduced in 1925 to control mosquitos, were successful.

Major introductions of other species to boost fish production include: redbreast tilapia and greenhead tilapia from Zambia to lake Kariba in 1959-1961, and Lakes Kyle and Chivero in 1959; Indian carp in 1966; the sardine (limnothrissamiodon) —kapenta/matemba from Lake Tanganyika to Lake Kariba in 1966-1967; the domestic carp from South Africa in 1970; the channel catfish from the US in 1980; two tilapia species from Israel in 1981; and the silver carp and grass carp in 1983 from South Africa.

The Florida largemouth bass, introduced in 1982 from the US, has since proliferated and spread throughout Zimbabwe. There have also been numerous local introductions from one waterbody to another.

Fish introduction in indigenous waters, as any other species, is a contentious subject.

While great socio-economic benefits can result if introductions are successful, catastrophes can easily occur.

During a conversation at an education workshop, I discussed how most of our fauna and flora, including our fish species, are given English names, instead of their original indigenous names. However, every creature, animal and fish, have indigenous names: “Chisikwa chese chine zita muchivanhu chedu.”

Among the fish species, beyond matemba, bream and tiger fish, we have zambanenje – the Cornish jack (mormyropsanguilloides); mhumbu/mburi – the mud sucker labeo fish; tsira –  the yellow fish, also known as guyukuyu or guyu, and mucheni/sheni – tiger fish, also known as muvanga and — the barbel (clariasgariepinus), or catfish, also known as muramba, hokota  or mukokota that can reach weights of  up to 30kg; mvumba or vundu – a larger species of catfish that can weigh up to 45kg each; pfukarushesha – the bottle nose fish and muromopote known as the bulldog fish.

I learnt about the myriad of fish species, their behaviour and habitat and the numerous health benefits of fish, while working in aquaculture sectors in marine aquariums in America and aquaveterinary laboratories and fish farms in Tanzania and Europe.

Many Shona sub-clans regard various fish species as a delicacy and social religious diet considered to be kosher or halaal.

Some elders contend: “Hove yakato yereswa — hayinaropa,” which means: “Fish is considered spiritually clean without the spilling of blood.”

This brings us to the assertion that fish farming is endemic to Zimbabwe and is an integral part of our ancient food security systems.

Fish is the oldest and most abundant vertebrates in the world comprising about 24 000 species – over 40 percent of all known vertebrates.

Trout farming in Zimbabwe was once a lucrative aquatic venture, exclusive to the Eastern regions of Manicaland Province.

This extensive part of the country, replete with magnificent views and a kaleidoscope of colours, is a popular destination for walkers, bird-watchers, golfers and trout fishermen.

It became a major source of employment, tourism, foreign currency earner, an angling sport and a wide range of agro-aquatic activities, often perceived as an exclusive euro-centric venture in Zimbabwe.

It goes without saying, however, that indigenous Zimbabweans were the breeders, advisors, workers and aquatic veterinary scientists who knew the waters, soils, flora and the beneficial conditions necessary for favourable, sustainable and lucrative trout farming. Commonly known as trout, this popular game species belongs to the salmonidae (salmon) family of fish of the genera salmo.

The most conducive areas for trout farming in Zimbabwe are in the Manicaland geographical spaces in the Eastern Highlands, where temperatures range between 10 and 190C,

Between 1908-1921, the ova of rainbow trout (salmo gairdneri) and brown trout (salmo trutta) were imported to the colony and the hatched fry were introduced into various dams and rivers in Mashonaland.

This success in Manicaland led to further trout importations and stocking in various dams and rivers in Nyanga for six years, until in 1937, when the first trout fishing season opened in the country. As a result, the Eastern Highlands became famous for their trout rivers that provided keen anglers with sport and sustenance each year from September to May.

As angling for trout in the Eastern Highlands flourished, a government hatchery-research station was established at Mare Dam to stock local rivers and dams in the Nyanga area, including the Bundi River in Chimanimani, with the fish.

Two decades later, in 1963, the trout hatchery in Nyanga began producing its own fish eggs in a network of several small dams stocked from the Mare Research Centre in Nyanga National Park.

Lakes Gulliver, Mare, Purdon, Rhodes and Udu Dam were stocked with rainbow trout that is now widespread within the park’s dams and streams.

The Udu Dam is the largest of the Nyanga dams with a capacity of 640 000 cubic metres and its earth fill embankment rises 19 metres; hence it stocks the largest population of fish.

Two other trout species, known as the American brook trout, also known as speckle trout or char (salvelinus fontinalis), and the brown trout, native to Europe, North Africa and Asia, were also bred at the hatchery.

From 1970 to 1971, a hybrid trout bred from a female brown trout and a male American brook trout was successfully hatched and subsequently named the tiger trout, unique to this country.

In the same season, 3 001 trout was caught under licence, from the rivers in the area and 3 437 from the Rhodes Nyanga Dam and the Mutarazi Falls National Park.

In 1973, four dams in the park were supplied with additional trout fish – namely Mare, Purdon, Gulliver and Rhodes dams.

In the past, rainbow and brook trout reached weights of 3kg, although today, lower weights are more common in Zimbabwe, due to a variety of factors, including rising temperatures due to climate change, reduced feed, drought, deforestation and poaching.

Needless to say, the history of trout farming is hardly known in Zimbabwe, and was not without its trials and tribulations when initially introduced to Zimbabwean waters.

The national Command Fishery Programme, initially introduced in 2015 and re-introduced in 2017, missed this important sector of the fishery industry which is in dire need of specialised revival today.