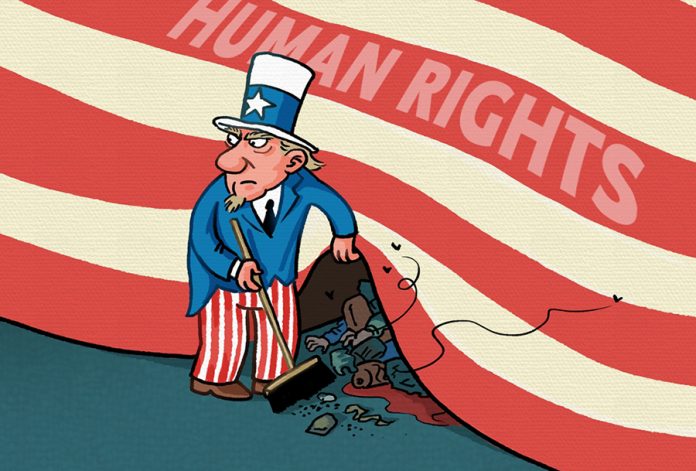 THE decision by the US to impose sanctions on Russia on Thursday last week was yet another confirmation that Uncle Sam will stop at nothing in his futile bid to control the world while masking his own deficiencies which are being brutally exposed by the day.

Uncle Sam has been on a warpath with his perceived enemies, including Zimbabwe which has been reeling from the effects of the illegal economic sanctions imposed on Harare in 2001 over the hugely successfully Land Reform and Resettlement Programme of 2000.

Since 2001, the US has been funding opposition political parties, the media and the so-called civil society to push for the removal of Government from power through illegal means.

Recently, the US Government availed US$5 million for several media houses to embark on an anti-ZANU PF crusade in the run-up to the 2023 harmonised elections which analysts have said will be won by the ruling Party.

Informed sources have told this publication that several activists in the media fraternity (names withheld) have started receiving the funds from the US Embassy in Harare.

Funding for the civil society and the opposition ostensibly for voter education, among other programmes, will be released as the country marches towards the hugely anticipated 2023 elections.

And the US has been vocal in its criticism of the leadership in Harare, claiming the ZANU PF Government has not embarked on what they say are comprehensive reforms.

The same statements have been coming from the opposition and the civic society which say the field is tilted in favour of the ruling Party.

Recently, the US extended its sanctions on Harare which it says ‘poses an unusual and extraordinary threat’ to its foreign policy.

The sanctions include a freeze of assets of sanctioned officials, barring of Zimbabwe from borrowing on the international market and blocking of funds of several companies, among others.

This is why it is important to keep Zimbabwe in mind when unpacking the US latest spat with Russia.

At least 10 Russian diplomats were expelled from Washington while several other officials and companies were slapped with sanctions.

In addition, the US will block Russia’s ability to borrow money.

Six Russian companies, which the US said supported Kremlin’s cyber efforts known as SolarWinds breach, were also put under sanctions.

The US says SVR, a Russian intelligence agency, hacked into Washington’s systems.

“We cannot allow a foreign power to interfere in our democratic process with impunity,”  Biden said at the White House.

But the US has been master of the interference game and their impeccable record in that regard speaks for itself.

In recent weeks, Biden has failed to intervene in the abuse of black people who have been subjected to abuse by his fellow white people.

On December 5 2020, US Army Lieutenant Caron Nazario was harassed by reckless white police officers in Virginia who pointed their guns and pepper-sprayed him during a traffic stop.

Nazario, who is Latino and black, said the two police officers, Joe Gutierrez and Daniel Crocker, knocked him to the ground and threatened to murder him.

The officers repeatedly demanded that Nazario step out of the car.

“I’m serving this country, and this is how I’m treated?” said Nazario.

“Yeah well, guess what? I’m a veteran too,” Gutierrez responded.

After that they pepper-sprayed him, struck him on the knees and handcuffed him.

No charges were filed.

A 2017 Equal Justice Initiative Report states that several black officers have been harassed by the police in the US over the years.

“One was Sgt Isaac Woodard, a uniformed World War II veteran who was headed home on a bus in 1946. He was removed and beaten by a white South Carolina police chief, leaving Woodard permanently blind,” reads the report in part.

“In 1962, Cpl Roman Ducksworth was killed by police while riding a bus from Maryland to his home in Mississippi. The bus driver called a white police officer to awaken Ducksworth, who had fallen asleep, according to Jerry Mitchell, founder of the Mississippi Center for Investigative Reporting. The two struggled, and the officer shot and killed Ducksworth.”

On March 29 2021, Chicago Police Department police officer, Eric Stillman killed a 13 year old Mexican-American boy Adam Toledo with the police initially claiming that the unfortunate boy was killed after what they said was an ‘armed confrontation’.

They later removed the word ‘armed’ after video footage showed the boy raising his hands before he was shot.

“We live in a city that is traumatized by a long history of police violence and misconduct,” Lightfoot said.

“So, while we don’t have enough information to be the judge and jury of this particular situation, it is certainly understandable why so many of our residents are feeling that all too familiar surge of outrage and pain. It is even clearer that trust between our community and law enforcement is far from healed and remains badly broken.”

Biden must focus on solving the brutality that is taking place in his own backyard and stop harassing other nations as he is doing.