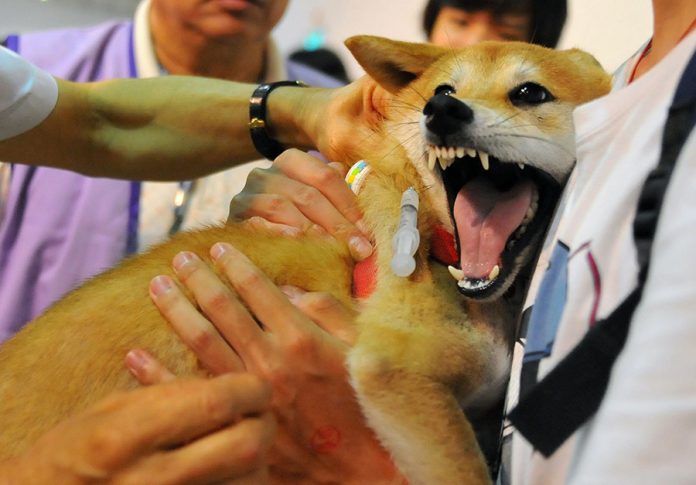 THOUGH the period between infection and the first flu-like symptoms is two – 12 weeks, incubation periods as short as four days and longer than six years have been documented, depending on the location, severity of the wound and the amount of virus introduced.

Rabies has been called hydrophobia because victims, locally paralysed and unable to swallow, have been known to become agitated at the sight of water

Worldwide it is estimated that rabies causes about 55 000 human deaths annually.

India has the highest rate of human rabies in the world, mainly because of stray dogs that have increased since a 2001 law forbade the killing of dogs.

Twenty thousand people are estimated to die every year from rabies in India — more than a third of the global toll.

In Asia, parts of the Americas and large parts of Africa, dogs remain the principal host

As of 2007, Vietnam had the second-highest rate, followed by Thailand; in these countries, the virus is primarily transmitted through canines (feral dogs and other wild canine species).

Another source of rabies in Asia is the pet boom.

To control the problem in Beijing, in 2006, China introduced the ‘one-dog policy’.

It is present in animal populations of almost every country in the world, except in Australia and New Zealand.

Australian bat lyssavirus (ABLV), discovered in 1996, is similar to rabies and is believed to be prevalent in native bat populations.

In some countries, such as those in Western Europe and Oceania, rabies is considered to be prevalent among bat populations only.

Rabies has been known to mankind since around 2000 BC.

The first written record of rabies is recorded in the Mesopotamian Codex of Eshnunna (circa 1930 BC), which dictates that the owner of a dog showing symptoms of rabies should take preventive measure against bites. If another person was bitten by a rabid dog and later died, the owner was heavily fined.

Due to its prevalence, in the 19th Century, rabies was considered a scourge.

In France and Belgium, where Saint Hubert was venerated, ‘St Hubert’s Key’ was heated and applied to cauterise infected wounds of rabies victims.

Here, by an application of ‘magical thinking’, dogs were branded with the key in hopes of protecting them from rabies.

The fear of rabies was almost irrational, due to the significant number of vectors (mostly rabid dogs) and the absence of any efficacious treatment.

It was not uncommon for a person, showing no signs of the disease, bitten by a dog merely suspected of being rabid, to commit suicide or to be killed by others.

In ancient medical times, the attachment of the tongue (the lingual frenulum, a mucous membrane) was cut and removed as this is where rabies was thought to originate.

This practice ceased with the discovery of the actual cause of rabies.

All human cases of rabies were fatal until the development of a vaccine by Louis Pasteur and Émile Roux (pictured left) in 1885.

Their original vaccine was harvested from infected rabbits, from which the virus in the nerve tissue was weakened by allowing it to dry for five-10 days.

Currently, immunisation prior to exposure has been used in both human and non-human populations where, as in many jurisdictions, domesticated animals are required to be vaccinated.

In the US, where rabies has been eliminated in domestic dogs and cats as reservoirs of rabies, rabies is still common among wild animals; bats, raccoons, skunks and foxes account for almost all reported cases (98 percent in 2009).

Due to a high public awareness of this virulent zoonotic virus, vaccination of domestic animals, reduction of feral populations and availability of post-exposure prophylaxis, incidents of rabies in humans are currently rare.

In several countries, including Australia and Japan, rabies carried by terrestrial animals has been eliminated entirely through animal control and vaccination programmes.

While in the UK classical rabies has been eradicated, on rare occasions, bats infected with a related virus have been found in the country.

To help reduce the risk of exposure to rabies, the Missouri Department of Health and Senior Services Communicable Disease Surveillance 2007 Annual Report recommends:

•Not handling strays or wild animals

•Contacting an animal control officer upon observing a wild animal or a stray, especially if it is acting strangely;

•Washing the wound with soap and water for 10-15 minutes, if bitten by an animal, and

•Contacting a healthcare provider to determine if post-exposure prophylaxis (PEP) is required.

Awakening to find a bat in the room, or finding a bat in the room of a previously unattended child or mentally disabled or intoxicated person is regarded as an indication for post-exposure prophylaxis.

In 2004, Jeanna Giese, an American teenager, survived an infection of rabies unvaccinated.

She was placed in an induced coma upon the onset of symptoms and given medication.

Her doctors administered treatment based on the hypothesis that detrimental effects of rabies were caused by temporary dysfunctions in the brain and could be avoided by inducing a temporary partial halt in brain function that would protect the brain from damage while giving the immune system time to defeat the virus.

After 31 days of isolation and 76 days of hospitalisation, Giese was released from the hospital. She survived with almost no permanent after-effects and, as of 2009, was starting her third year of university studies.

Giese’s treatment regimen became known as the ‘Milwaukee protocol’, which has since undergone revision.

Two of 25 patients survived when treated under the first protocol.

A further 10 patients have been treated under the revised protocol, with a further two survivors.

The anaesthetic drug, ketamine, has shown the potential for rabies virus inhibition in rats and has been used as part of the Milwaukee protocol.

In 2008, in Cali, Colombia, an 11-year-old boy was reported to have survived rabies and the induced coma without noticeable brain damage.

In 2011, Precious Reynolds, an eight-year-old girl from Humboldt County, California, became the third reported person in the world and the second in the US to have recovered from rabies.