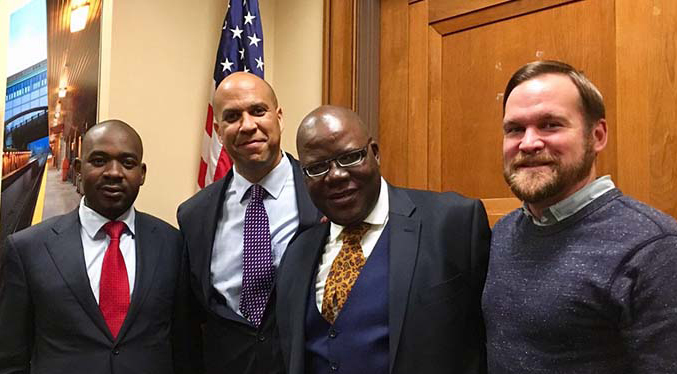 A STUPEFYING combination of naivety and fatuous detachment from history, even when it is becoming increasingly clear that the changing dynamics in global political and economic affairs are swaying the odds in favour of previously oppressed people, means that each time an African nation holds elections, they can only be declared free and fair if and when opposition parties win.

Such fallacious thinking, which has been the hallmark of opposition parties and their Western handlers in Africa, particularly in Zimbabwe where the West has openly endorsed the opposition MDC’s (now CCC) futile cause once again brings to the fore questions on who should contest in polls and who should not.

The answer is: As long as the opposition is being supported by the West, it should not be anywhere near polling stations with its dubious claims to representing the people and fighting for ‘democracy’.

Democracy was fought for and brought by ZANU PF during the liberation struggle and the opposition is a beneficiary of that sacred ideal which it is now abusing by openly joining hands with our erstwhile colonisers.

Given their nauseating antics where they have been all out trying to tarnish the country’s image and presenting it as a pariah State, the reality, which none among them cannot dispute, is that they owe their existence to ZANU PF’s sometimes overstretched generosity.

ZANU PF, which has contended with the burden of Western intrusive politics, and the opposition’s theatrics while attending to the never ending needs of the masses has been too soft with the opposition which has always played to the gallery.

The run-up to last Saturday by-election in Gokwe-Kabuyuni Constituency where ZANU PF candidate Spencer Tshuma trounced the opposition CCC’s Costin Muguti by 10 880 to 4 915 once again laid bare the lengths the opposition are willing to go in their bid to tarnish elections in the country.

Never mind the yawning gap in margins, it will only get better for ZANU PF which has been battling to develop the country’s economy which has taken a battering from the MDC/CCC-invited economic sanctions.

It is those sanctions which make the electoral field heavily tilted in favour of the opposition since they were created to aid and abet their futile cause.

And it is for that reason that they should never be allowed to contest in any election until those illegal sanctions are removed.

Senior members of the opposition, like their founding leader, the late Morgan Tsvangirai, the US’ blue-eyed boy Tendai Biti and CCC ‘leader’ Nelson Chamisa, among others, called for the imposition of those sanctions.

In Gokwe, on Thursday last week, stung by the reality of yet another drubbing, they went back to their default settings and started creating fictitious stories of violence allegedly sponsored by ZANU PF.

But technology has been a beauty for those of a progressive disposition, especially in times like these where the opposition is aware that theirs is hopeless cause devoid of both sense and substance, images of their members barricading roads started emerging, brutally exposing their shameless lies.

Caught by surprise, videos of a CCC vehicle in full flight was then posted on Twitter by their embattled spokesperson Fadzai Mahere as ‘evidence’ of what she claimed was a ‘high speed chase’ by ZANU PF ‘thugs’.

Nowhere in the video were any ZANU PF vehicles, thugs or even a car or cars that were allegedly ‘chasing’ the CCC speeding vehicle.

This is where they should take our word seriously as we did with the excitable and now incarcerated Job Sikhala.

The State’s patience is being tried and a storm is imminent.

They cannot disturb the smooth flow of electoral processes, provoke the authorities, armed with their vile sanctions and when they are mauled, cry foul, waving the now outdated ‘free and fair elections’ card.

The time for that hogwash has come and gone.

The country needs serious political actors; political players who do not take the people for granted all to please their gullible handlers.

The message that there are no sacred cows when it comes to upholding the law also goes to Chamisa who has been poking at the authorities in his press conferences.

Let us hear him speak at his press conference last week.

“They have localised violence to make sure that they will stop me. I want to say to ZANU PF, I will go anywhere, and everywhere, you will not stop me,” Chamisa said.

“I have been telling people that if they want to kill you for T-shirts, don’t worry about them. Let’s go Operation Mango — yellow outside, green inside. Why? To preserve yourselves. Be ZANU in their slogan, be ZANU PF wherever you are going, but show and maintain your integrity to support the change.

You are not the owners of this land. Zimbabwe belongs to Zimbabweans. Mr (Emmerson) Mnangagwa, accept fair competition, don’t resort to your tactics that you have been using. They will not work. I can tell you that I am ready to fight peacefully.

Just in the past six months alone, it’s shocking that we have had over 26 arrests of mainly opposition leaders. Just in Gokwe alone, 13 people were injured. I saw all of them.”

“Government Ministers are behaving like thugs. They literally incite violence, sponsor violence and co-ordinate violence, which is very unfortunate. What we want is to insist on peace.

As I have said, rural areas have become centres of mass victimisation.  Intimidation and terror against citizens, particularly those that are in the alternative is on the rise. Our chiefs are in trouble. Village heads are in trouble. They are being subjected to incessant harassment. Food and support from government is being weaponised.

Violence has also become a big issue. The human rights situation in the country has gotten to another level. What is clear is that the subject of the matter is human rights in the rural areas. People do not have access to basic services.”

If things continue the way they are, let no one be surprised when sanctions once again become a big issue in next year’s harmonised elections.

As is becoming the norm, we leave it there and let things unravel