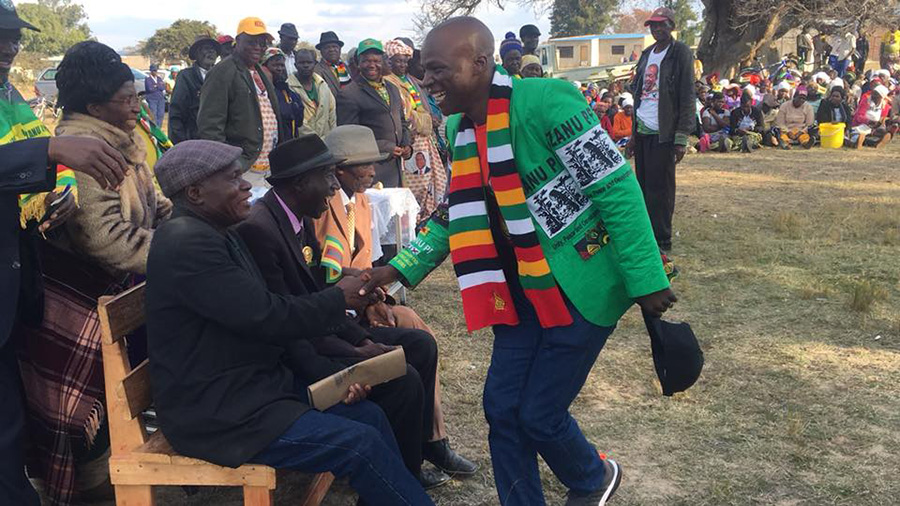 There are only two options for you.

First is to win an election for your Party.

Second is to win an election for your Party.

This is the simple task that is confronting John Paradza and his new ZANU PF Youth League executive.

When ZANU PF held the 7th National Conference of the Youth League last week, the most critical aspect of that auspicious gathering was not only to show the world and its critics that democracy is well and truly alive in the Party, it was an opportunity to demystify one of the many lies that have been parroted by the opposition and their handlers that they control the youth in the country.

It is in times like these that ZANU PF rises to the occasion, when it takes charge of the country’s politics as it was meant to be from the beginning.

And there they were, the country’s youths, in their numbers and paying homage to the founding principles of this country as enshrined in the ideals of the liberation struggle.

And this is where the opposition has gotten their politics wrong; their bizarre attempt to erase the liberation struggle from the majority’s psyche and trying to create a new narrative, a new trajectory for the country through what they maliciously call ‘struggle for democracy’.

Of course it is clear where they draw that malevolence from; their insipid handlers from the West, who only yesterday were abusing our elders.

But this so-called struggle for democracy, while intended to malign the liberation struggle, has its roots firmly entrenched in neo-colonialism.

The brazen attempt by the opposition to restore the old order where the majority were mere bystanders to the plunder and pilfering of the country’s resources by the minority will come to nought.

This is the burden that ZANU PF carries for, and on behalf of, the masses, regardless of their political affiliation.

ZANU PF not only bears the responsibility of delivering ownership and control of land and the country’s abundant natural resources, it also carries the burden of protecting and defending the same from the avaricious West.

That includes teaching the opposition lessons on patriotism, teaching them lessons in the ballot and then accommodating them despite their penchant for leaning towards the insanity of believing that their Western handlers are our saviour.

And the 7th National Conference of the Youth League could not have come at a better time, especially with crucial elections in the offing.

This gathering, while unleashing a new executive, unravelled the vibrant relationship the ruling Party has with young people since its formation on August 8 1963.

It is the party that inspired and prompted young people to take up arms against an enemy who, up to date, is not showing signs of relenting.

What the young people of Zimbabwe are now fighting is an economic war wrought by the illegal economic sanctions from Western powers who openly support and endorse opposition parties like CCC.

The task is simple for the Youth League.

They have to lead from the front in the 2023 harmonised elections.

They have to bring their game to the fore.

They have to redesign, rebuild and reclaim the political landscape.

They have to steer away from the opposition’s provocative politics.

They have to deliver a resounding victory to the ruling Party.

Already the path has been set by the country’s leadership through the many economic opportunities that have been set for young people.

This is what President Emmerson Mnangagwa said in his speech while officially opening the conference in Harare on Thursday last week.

“Unlike the young people of yesteryear who had to use the barrel of the gun, you must now defend this rich heritage through your votes. A vote for ZANU PF is a vote for our independence, freedom and sovereignty,” said President Mnangagwa.

“It is a vote for development, a secure destiny and a brighter future. Never be led astray by the many wolves in sheep clothing, roaming our political landscape. Do not sell your birthright for small trinkets.

“To date, five hundred hectares of land has been set aside in every province for Agricultural Integrated Youth Skills Development Centres. These Centres will train the youth on various aspects of the agriculture sector.

“Similarly, I was pleased to handover heifers to the youth from all provinces as part of the ongoing Presidential Livestock Inputs Support Programme.

“The Heifer Pass-On Scheme follows the Piggery Youth Empowerment Programme launched under the auspices of the Ministry of Lands, Agriculture, Water, Fisheries, Climate and Rural Development.

“The Presidential Rural Horticulture Scheme is also on course and should see our young people participating in the export-led production and productivity drive.

“I congratulate our young farmers for participating in the Presidential Climate Proofed Pfumvudza/Intwasa and the CBZ Agro-yield Programme, among other agriculture programmes. Your contribution, as young farmers, to national food security is acknowledged and appreciated.

“The mining sector remains open for the participation of youths. Presently, a considerable number of our youth are actively mining and contributing to our national mining sector targets. This is applauded.

“Government recognises that all mining operations and other economic activities must be in sync with meeting ‘local expectations’, such as wealth creation, youth and women empowerment, community involvement as well as protection of the environment”.