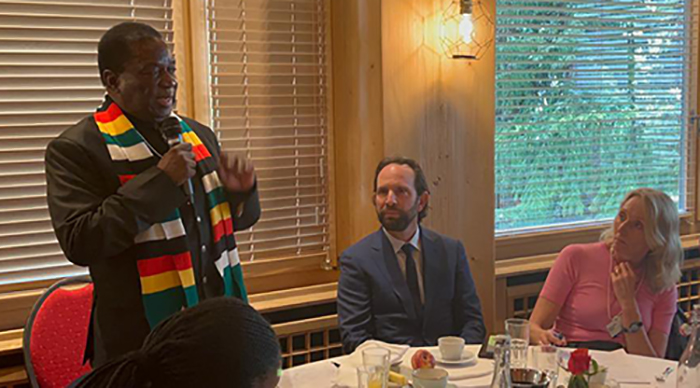 THAT Zimbabwe, like any other country, faces many challenges is an indisputable fact.

However, what really irritates those who are inclined to the development and wellbeing of the country is the fact that our enemies who connive with locals to destabilise the country in order to create an anti-people narrative that is premised on discouraging the upliftment of the livelihoods of the masses have made little effort to mask their role in the suffering of the masses.

Ours is a country that is being punished for having scored big on many fronts.

A country that demonstrated that it is possible to raise the bar when it comes to empowering its citizens.

A country that has walked the talk when it comes to delivering to its people.

A country that has defied the odds and etched its name in history for uplifting the livelihoods of its people.

And here we are, contending with an embittered West that itches to drag us back to the colonial era.

Now, when we tell our counterparts in the opposition that one of the results of the relentless actions of their handlers in the West is a deeply divided Zimbabwe, they dismiss us as power hungry individuals who are trying to maintain what they say is ZANU PF hegemony.

They ingenuously wave the so-called democracy flag, claiming they are engaged in what they say is a ‘struggle’ for freedom, in a rather bizarre bid to equate their regime change project to the country’s liberation struggle.

As with previous attempts, their bid to destabilise and destroy the country will come to naught.

Zimbabweans and progressive minds from across the globe can see through their ruse.

The devastating effects of the Western-imposed illegal economic sanctions is seen from that naïve part of the world as ZANU PF politicking aimed at masking its alleged failures.

When they talk of failed policies, they mean the continued initiation and subsequent implementation of such noble initiatives like the Land Reform and Resettlement Programmes, and the numerous economic empowerment programmes that have been delivered to the masses.

But nowhere in the world have so-called ‘failed’ programmes which have raised the standards of living of many people warranted the imposition of economic sanctions on any country.

If anything, failed policies, by their very nature, affect the masses, meaning that they are subjected to untold suffering and as such have to be protected from the said failed policies.

How then do people who are suffering from ‘failed’ policies get punished through such bizarre acts like economic sanctions from outsiders?

Put simply, the sanctions help in compounding the suffering of the same masses who are said to be living in a county of failed policies.

How a people who are said to be contending with the vagaries of the sanctions be told that the sanctions will improve their so-called sorry plight is a mystery!

If anything, the suffering of the masses therein entails that the aggrieved benefit from the benevolence of those who are so keen to help in extricating the country and people from the doldrums that we are said to be living in.

Let us, for example, consider the plight of a financial institution which is serving at least 10 000 people but is put under sanctions for allegedly supporting the system as they unwittingly prefer to call the Government.

Now, what this effectively means is that an average of 30 000 people would have been affected through those sanctions if each one of the 10 000 is supporting at least three people.

When these facts are presented to them, the opposition say the sanctions are targeted at ZANU PF people, a lie that has failed to hold.

And we will never tire of bringing to the fore these facts.

Also, and going by their logic, if it can be referred to as such, when asked about their plans for the country, they shamelessly tell us that once they get into power, they will bring back the very people whose actions are hurting the same masses they claim to represent.

Devoid of substance, and confronted with reality of a thriving agriculture sector, which they detest, they conveniently skirt the sensitive land issue because they are very clear on the direction they want to take the country in the highly unlikely event that they assume power.

They will not only return the country to whites, they will also reverse the land reform.

The numerous economic empowerment programmes that the Government has pursued since 2000 will not be spared from the madness.

Everything that was fought for during the war of liberation will be rendered null.

Even the liberation struggle itself will be erased from our memories under the guise of establishing what they say will be a ‘new beginning’ and all this is being crafted from Western countries that are now in dire need for raw materials following their ill-informed decision to take sides with Ukraine in its ongoing conflict with the assertive Russia.

They are coming back in full force to recolonise Africa and in our opposition they have naïve partners who are willing tools.

But Zimbabwe, a country born of blood and tears, a country of plenty, will continue to stand tall in the face of the new adversity.