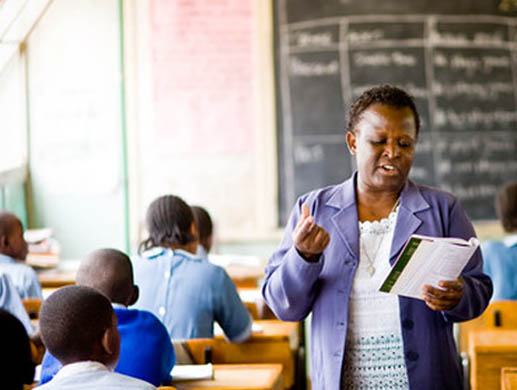 IN this fifth episode of our discussion on heritage teaching and learning we focus on the importance of re-affirming our African identity beyond skin colour.

Using local languages as media of instruction and re-naming schools are part of reclaiming our African heritage.

We must assert right from the beginning that our local languages are the greatest heritage that define who we are.

In our languages are embedded all our cultural norms and values.

Language creates the most enduring comfort zone for a people. It enables us to communicate our experiences, to express our feelings and to express and record our thoughts.

Language enables us to describe and to define our environment.

Where we become creative, language allows us to communicate our creations.

A musician who sings lyrics in the local language communicates his/her feelings to the audience while the one who sings in English restricts his audience to those who have learnt the foreign language at school.

It is common knowledge that most school/college students fail or score low marks in examinations because of their limited capacity to use English as a communication tool.

They will think in their mother tongue, but, fail to translate their ideas into communicable English.

It is common practice for teachers to penalise their students for poor English expression.

This is particularly so in the Education 3.0 system, now defunct, where emphasis is on linguistic and verbal excellence.

This is where research generates thesis whose merits are not found in the patentable ideas generated but in the excellence of linguistic expression.

Education 5.0 is part of the new dispensation calling for a heritage-based system where learners concentrate on innovations for turning their knowledge on their local environment into marketable goods and services.

It represents Zimbabwe’s best chance for achieving Vision 2030 and looking beyond to African Union’s Vision 2063!

There is a heritage-based problem for both teachers and learners as we enter the Education 5.0 era.

Despite a requirement that all who train as teachers must pass English language at ‘O’-Level with a ‘C’ grade of better, most primary school teachers find the going tough when it comes to effectively teaching and communicating with the young ones in English.

Not only must they teach their pupils the English language which is foreign to both learner and teacher, but they must teach all other subjects (except the local language) in the same exotic language, English.

First, one struggles with the vocabulary (English) and then with the concepts of the particular subject.

This is double jeopardy.

The situation is worsened by the fact that both pupils and teachers only experience an English language communication environment during formal school lessons.

During school breaks and for all the time they are at home, pupils are communicating in their mother language.

Often even the textbooks are inadequate for the numbers of pupils in each class.

There is urgent need for reading materials with a local content written in language that pupils can easily comprehend.

That is the question.

Eurocentric policy-makers would rather we all went English. The real Africans would rather we do not change colours like a chameleon just so we look European even when everybody knows we are African?

When the new curriculum was introduced some three years back, concern was raised about the availability of supporting texts to cover the intended content of the various subjects.

Two issues stood out: the first was the content or subject matter and the second was the language of instruction.

The content has to encompass first our local Zimbabwean heritage, including languages and secondly, our broader African heritage.

In history and the arts, teaching and learning must cover the prehistoric, pre-colonial, colonial and post-colonial heritages of Zimbabwe in particular and Africa in general.

In the natural sciences, both living and non-living components of the African environment and their socio-economic exploitation will constitute the subjects of study, research and development.

Heritage is thus simply defined as our God-given natural resources.

When learners are forced to use a foreign language at school, it means they have to first think in the mother tongue and then translate into the foreign language English before either writing down or verbalising the ideas.

Given the learners’ very limited English vocabulary, the translation of ideas into English is a mammoth task.

The language challenge explains why African students, in Zimbabwe and elsewhere in Africa, forced to use foreign languages as learning media perform poorly in examinations. They resort to memorising without understanding, chunks of various texts in different subjects.

Ultimately these ‘educated’ Africans also make little contribution to science and knowledge due to language shackles. They are the educated who contribute nothing to the continent’s development.

They are busy trying to recreate conditions similar to those they experienced in Europe and the US where some were schooled. They lack innovation.

Under the colonial Education 3.0 system (Teaching, Research, Outreach), more often than not, the content in the various texts is Eurocentric, edifying things European and denigrating things African.

All scientific achievements and inventions are presented as having come from white Europeans.

The history texts compiled for African schoolchildren omit to mention the thousands of inventions by black Africans, including black slaves forced to adopt European names and thereby becoming unrecognisable as black Africans.

By subjecting African learners to school textbooks whose narrative is that of supposedly ‘superior’ European achievements in all spheres of human endeavour and mediocre performance by blacks, school texts perpetuate an enduring self-hating inferiority complex among Africans.

The young blacks grow up believing from what they read in books at school that Africans are non-achievers.

As a result, they do not compete with whites but are content to play second fiddle and very subordinate roles.

As an example, Napoleon Bonaparte is portrayed in African school textbooks as a great French hero and soldier while Tshaka Zulu, one of Africa’s finest military strategists and King and founder of the Zulu nation, is depicted in African school history books as a ‘tyrant Tsahaka the Terrible’, who was  allegedly cruel and murderous!

This is the kind of heritage-based poison that must be cleaned out of our school syllabi, a continuous negative narrative heavily loaded against the image of Africans.

Our learners are made to adopt, as heroes, white fortune hunters who butchered and decapitated our ancestors’ heads to display as ‘hunting’ trophies in European museums.

Their actual heinous deeds are not highlighted but pure naked lies about their benevolence to Africans!

In Zimbabwe, 40 years after a bitterly fought and bloody liberation war, are we comfortable to send our children to schools named after the very adversaries we fought yesterday? In Gweru Cecil John Rhodes Primary School, Churchill, Roosevelt, Allan Wilson, Godfrey Huggins and others in Harare!

And even a town called Selous somewhere in Mashonaland West!

And all of Harare’s former all-white suburbs are located and bear the names of the farms Cecil John Rhodes parceled out as a prize to the band of murderous fortune-seekers that he named ‘pioneers’.

These include Borrowdale Estate, Avondale Farm, Mabelreign, Mt Pleasant, Pomona you name them.

And how proud the African is to live or be associated with these black marks of our colonial history.

And are the black Zimbabweans living in these surbubs ‘proud’ to be associated with place names that represent the first naked rape of our beautiful country?

The heritage or legacy of colonisation is preserved in the names of Harare’s suburbs.

If not Eastlea, then Westlea!

No, we cannot forget that legacy but we refuse to permanently live in the shadow of our colonial past.

We also must chart our own destiny.

That is the greatest shame of the so-called ‘elites’ in Zimbabwean, thinking that associating with the names of our colonisers will lift our social standing!

Is that what our freedom fighters died for, to speak in English and live in a suburb bearing a European name?

Is that our ultimate goal?

Where now is the heritage?

Why do you want to suppress the black heritage by promoting a white heritage through all these colonial names that make Kaguvi, Nehanda, Chingaira, Mashayamombe, Mukwati and numerous others whose skulls still gaze into space in British museum shelves, turn in their graves!

What pride should black pupils feel attending schools named after invaders who massacred our ancestors to forcibly grab our land and its resources?

White pupils and their teachers at Allan Wilson would proudly shout the slogan: “They were men of men!”

What do the current black pupils, their teachers and headmaster shout?

Is it not abomination?

New school names and a new motto reflecting our African heritage are a must.

That is the heritage-based teaching environment we must build and consolidate.

Our education system must build innovative, confident, self-believing and knowledgeable graduates prepared to fight for their rightful niche as Africans, Zimbabweans, in the global village.

The future belongs to the Africans.

The challenge remains for the intellectuals and academics to generate educational materials centred on the African heritage. Only then can we build an Afro-centric world for Africa based on our own heritage.

We are our own liberators!