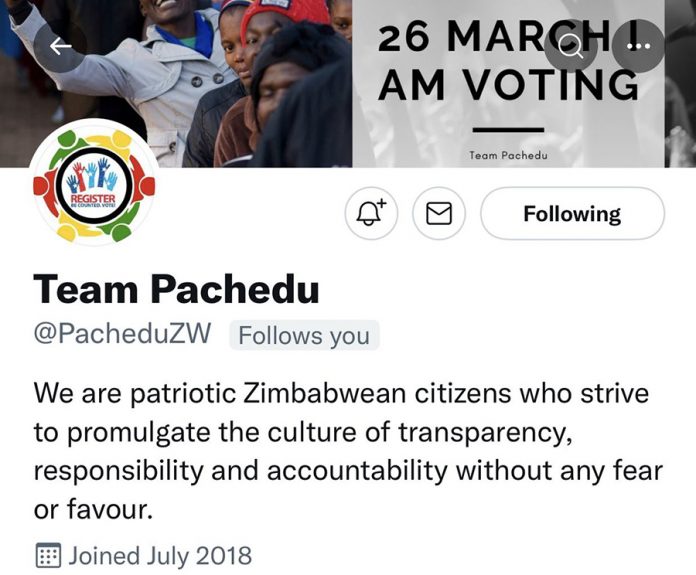 LIFE has it that a thief is always afraid of being robbed.

The past weeks have seen a precipitant spate of faked fear by the opposition in Zimbabwe, especially the ‘newly’ set up Citizens Coalition for Change (CCC) and its surrogate frontline organisation, Team Pachedu, for what they termed, ‘Zimbabwe Electoral Commission (ZEC) electoral vilification and fraud against them’.

Team Pachedu, through social media and acting in its opposition-backing corner, tried, and is still trying, to paint a naïve picture of how ZEC is trying to rig the forthcoming March 26 2022 by-elections using ‘voter placement and replacement’.

From February 4 2022, Team Pachedu, an organisation that claims to be a “… group of patriotic Zimbabwean citizens who strive to promulgate the culture of transparency, responsibility and accountability without any fear or favour,” hard-lined its social media platforms with concentrated ‘false cries’ on behalf of the opposition in Zimbabwe.

In a spate of tweets, they wrote on February 16 2022 that: “ZEC secretly changed the polling stations for at least

In March 2019, ZANU PF won the Cowdray by-elections after 20 years amid observer reports that many people did not vote after being redirected to other stations.”

On February 15 2022, they said: “ZEC created two new polling stations in Glen view South which cannot be justified by the low number of deceased and new voters.

Rather, the additional 889 voters at these new polling stations were illegally moved mainly from Zvimba and other Glenview South wards.(sic)”

On February 8, they wrote: “In Shurugwi North, ZEC has moved many people from their original Ward 3 to other wards despite the fact that their residential addresses have not changed.

ZEC lied to the nation in the statement that there was no mass-movement of voters across electoral borders.”

On February, 15 they again said: “In Greendale, Harare East Constituency,

How were these people allowed into the voters’ roll without an address in violation of the Electoral Act?”

This is a deliberate attempt to soil the credibility of ZEC in the hope of diverting attention and veil some scary underground, heinous and petrifying activities being orchestrated by the opposition House of Assembly Members who have been in Parliament under urban constituencies since 2000.

The likes of Murisi Zwizwai, Charlton Hwende, Amos Chibaya, Clifford Dhliwayo and Happymore Chidziva are at the centre of a rigging endeavor that has given rise to the use of some high schools facilities in the country, particularly halls, for scandalous meetings.

This is also a clique that is behind a push to frustrate senior CCC officials in the hope that they leave the party.

From January 2022, there have been meetings organised by members of the CCC, with the venues being school halls.

Working with bogusly led organisations, such as the Amalgamated Rural Teachers Union of Zimbabwe (ARTUZ), itself having lost relevance in rural school teachers, it is believed some schools provided facilities for this homeless party, CCC.

Sources who attended one such meeting indicated and revealed that a grand plot for the massive win for CCC in Harare Central was drafted for action.

Hence, Zwizwai, who is the serving MP for Harare Central, was then charged with the responsibility of ‘protecting’ Harare Central where, arguably, he has done nothing to influence positive development.

Zwizwai is alleged to have then organised some paid Commissioners of Oaths who gave proof of residence letters to youth from Epworth and Mabvuku, among other areas, to be registered in Harare Central.

It, therefore, would not surprise anyone that even in the 2018 election, Zwizwai won with a larger number of votes that surpassed the inhabitants of the area in most wards.

An example that quickly comes to mind is how a ward or polling station like Queensdale, itself inhabiting close to 300 households, would produce a winner garnering around 4 000 votes?

The noisy Team Pachedu is on a mission to put ZEC to task with false statistical data and voter registration scandal-like allegations.

However, lest we forget that those busy making noise in the political field are unwittingly sending a message of how scared they are of the impending polls.

They have been doing nothing for the electorate and the chickens are coming home to roost.