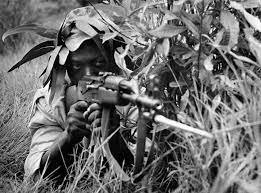 IN 1898, the British executed Mbuya Nehanda.

A thorn in the flesh of the imperialists, Mbuya Nehanda was one of the spiritual and war leaders of the people of Dzimbahwe.

Her crime was being the inspiration behind the revolt against the British South African Company’s colonisation of Mashonaland and Matabeleland.

Her last words, as she was executed on April 27 1898 were: ‘Mapfupa angu achamuka (My bones shall rise)’.

And after her execution, the British celebrated, believing they had totally crushed the uprisings.

The British underestimated the power of Mbuya Nehanda’s words.

Indigenes once again organised themselves to fight colonial rule.

Having failed to achieve desired results with the First Chimurenga, locals did not despair, leading to the Second Chimurenga.

In April 1966, a group of 21 ZANLA freedom fighters ‘sneaked’ into the then Rhodesia from Zambia.

The group then split into three groups as they had different missions.

A seven-man squad, made up of cadres who had received military training at Nanking Military College in China, headed for Chinhoyi.

Thus, Mbuya Nehanda and the Chinhoyi Battle are more than historical events.

On those gallows, where the country’s foremost heroine was hanged and the ground turned hallow by the blood of seven sons of the soil, a story was scripted that will live for eternity.

Those crucial moments are not a story of sorrow and despair.

On April 27, Mbuya Nehanda was hanged by the British colonialists and immediately, a telegram was dispatched to the Queen of England that the war was over.

After more than 10 hours of heavy bombardment by a ground and an aerial force and only when they were sure that the freedom fighters had run out of ammunition did the Rhodesians dare venture into the ground which these brave souls had occupied.

And, to town the Rhodesians went, trying to convince the world that everything was under control in their colony.

But the story produced by those two momentous occasions is one that defines us and remains relevant for all time.

The gallows on which Mbuya Nehanda was hanged is a templet from which the children of Zimbabwe must all read.

The message simply reads: ‘All for Zimbabwe’.

The 12 hours that the Chinhoyi seven fought should simply be our 12 rules to live by:

We continue to remember these important moments because they are the essence of who we are.

The hanging of Mbuya Nehanda and the Chinhoyi Battle were significant in many ways; they are not just a source of pride but templates that guided the execution of the whole liberation struggle.

And today they remain relevant, for the struggle never ends.

And 68 years earlier, on April 27 1898, with full dignity and defiance, Mbuya Nehanda faced her killers and would not renounce her beliefs and convictions.

The First Chimurenga and the Chinhoyi Battle were executed by characters who were cool, resolute, decisive and determined.

The Battle of Chinhoyi was, without doubt, one of the boldest enterprises ever undertaken by our people, who, from day one of colonisation, resisted the robbery of their country by the British.

The execution of Mbuya Nehanda and the Chinhoyi Battle showed us the mettle of true daughters and sons of the soil, selfless and committed to the motherland.

April 27 and 28, are crucial dates for our country, unmarked on our calendars but, nevertheless, very important.