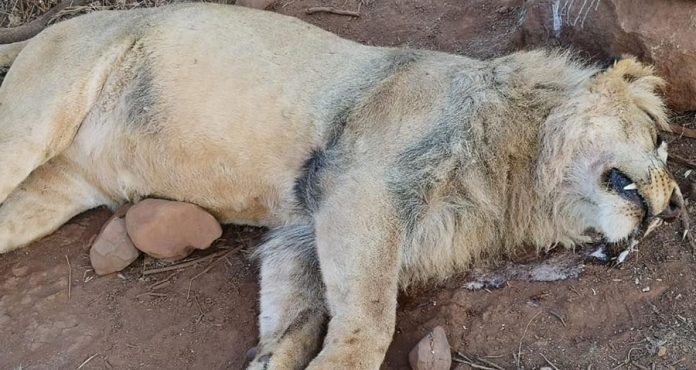 The cougar, as it is properly known, was put down by veterinarians when it could no longer stalk food or defend its territory.

P-22, the name assigned by Fish and Wildlife authorities (P for Puma and 22 for its tracking number in their registry), had roamed a vast park in the middle of the highly populated Hollywood Hills for more than 17 years.

He got to this urban island above the movie capital by somehow safely crossing two different highly travelled, high speed freeways in search of a mate.

Sadly, for all who followed P-22’s story, he never found one.

Soon after his death, many animal-lovers questioned why he was euthanise, reflecting the tendency in Western cultures to treat all animals as the equivalent of human beings in need of compassionate and sensitive end-of-life care.

Some of the outpouring of grief was sparked by a Los Angeles Times eulogy written by Beth Pratt, a local animal rights advocate:

“Dear Friends, I can’t finish this sentence without crying … Biologists and veterinarians … announced today they have made the difficult decision to end Puma-22’s suffering (from internal damage caused most likely in a collision with a car) and help him transition peacefully to the next place.

I hope his future is filled with endless forests without a car or road in sight and where deer are plentiful, and I hope he finally finds the mate that his island existence denied him his entire life.”

This excerpt from Pratt’s letter captures how most Westerners romanticise the life of wild animals and have such difficulty understanding the reality of living among wild animals in Africa.

But this type of romanticism can also enhance the  fundraising capability of animal rights groups.

The reality for wild animals across the globe is vastly different.

The paradise Pratt imagines does not exist.

Simply put, wild animals do not easily find abundant food and a compliant mate anywhere in the world despite the hopes of starry-eyed dreamers in the West; what these animals achieve is by means of their constant awareness of the dangers that lurk about them and their overpowering desire to survive.

Africans understand this but have yet to convincingly communicate this reality to Westerners.

There is no equivalent to the Disney World fantasy in Africa.

The crushing defeats, by Western interests, of Southern Africa proposals to benefit from wildlife are proof enough that the goal of wildlife, unfettered by any human interference, is an important fundraising theme for the animals rights groups.

Just listen to the apology Pratt offers in her eulogy for P-22 moments before the life-ending drugs were administered: “I sat near him, looking into his eyes for a few minutes, and told him he was a good boy.

I told him how much I loved him.

How much the world loved him.

And I told him I was so sorry that we did not make the world a safer place for him.

I apologised that despite all I and others who cared for him did, we failed him.”

Botswana Chieftainess Rebecca Banika, whose Pandamantega Community benefits from hunting wildlife that moves out of Chobe National Park into her community, dismissed the romanticism of Western animal rights advocates: “They are demon-possessed because they are inhumane and don’t have any feelings for mankind,” she said.

“Early this year, a 65-year-old woman was attacked and injured by a lion while weeding her crops and became visually impaired.

“This made her unable to fend for herself and to care for a mentally-challenged son and a 90-year-old mother.”

There was no known mention of this incident in the Western media, yet this vicious assault represents just one of many cases of wildlife attacks that African communities co-existing with wildlife experience regularly.

A member of the Chobe-Caprivi Conservancies Committee, Nchunga-Nchunga, blasted  the grief-stricken Los Angeles residents for acting, “…as if they have lost a president.”

The executive director of Botswana’s Ngamiland Council of NGOs, Siyoka Simasiku said: “I find it hypocritical to put animals at the same level as people.

“I think the world has gone crazy now.”

A Zimbabwean resident of the wildlife-rich Masoka Community — where an international hunting revenue-built-school is producing medical doctors, nurses, teachers, technicians and accountants — Ishmael Chaukura said that every year, hundreds of people living with wildlife are killed or injured by wild animals, but “…the Western countries and animal rights groups are silent about it.”

Elsewhere in South Africa, Esther Netshihvongeni, chairperson of the African Community Conservationists, said: “In Africa, we respect our animals as animals, but not as human beings.

“The Western animals rights groups are driven by greed and a colonialist mission.

“Africans have different clan names associated with wildlife such as elephant, eland, lion and buffalo, among others.

“These clan names are meant to remind us to manage, control and exploit these animals sustainably.”

The animal rights groups thought the problem could be solved if the animal was brought back to full health.

But his injuries and age proved beyond current medical capabilities.

Harris has long thought about the reason Westerners want to treat all animals as equal to humans.

“Western countries transitioned from rural to urban life in just a few generations as industrialisation enabled rapid growth,” he said.

“Children on farms had a realistic attitude towards their animals as sources of life and livelihoods to them and their families.

“But kids living in apartments in cities have no such connection to the animals that provide the food they eat or the money they need.

“The only animals most urban children know are the pets they live with.

“They are cared for as members of the family, not as sources of food and sustenance.”

Harris notes that wild animals have never been free of human attention.

“We have always wanted them for their food, their medicinal benefits, their skins and their parts,” he said. “But we have also always needed to protect ourselves from their predatory attention to our crops and domesticated animals.

“It is the eternal struggle of predator versus prey.

“Unfortunately, as human populations grew faster than the animal numbers, our needs began to decimate their vast numbers.

“But to our credit, we realised the folly of destroying species through human excesses and greed.

“As a result, we moved to change human behaviour through organisations and rules that would protect them.

“But the pendulum has now swung too sharply away from the balance that both humans and animals need to successfully co-exist.

“Like most good things, unscrupulous forces have found ways to take advantage of the situation.

“The desire to protect wild animals has been corrupted by those (animal rights groups) who have made their personal benefit rather than the community’s benefit or the animal’s benefit, the objective to achieve.

“That is what the UN’s Convention on International Trade in Endangered Species of Fauna and Flora (CITES)  has allowed.

“It is time for new mechanisms to arise — to keep the best of what CITES does while producing a new way to achieve a sustainable balance that will get us and all of nature’s species to the 22nd Century and beyond in harmony.”

This community has embraced family planning to avoid over-population that would displace wild animals from land set aside for them.

“If the humanising of animals is not opposed and condemned, it  can potentially spread a worldwide anti-wildlife-use-culture in the future. That will be disastrous,” he warned.

“The principle of ‘sustainable’ use has almost been eradicated from CITES by the anti-use NGOs,” said Stiles.

“That approach holds that if an outcome is uncertain, better to act on the side of caution.”

Since certainty can’t be established until wildlife trade is fully tested, the anti-use NGOs have successfully frozen nearly all use of wildlife resources through CITES.

But the end result of this cautionary policy has proven to be the opposite of what the anti-use NGOs want: Increased poaching of and illegal trade in endangered species and their products, loss of species management, reduced species population and decreased rural incomes.

The bottom line is that animals are not human beings and should not be treated as such.

When the win-win relationship between people and animals is lost, the necessity and incentives for people to conserve wildlife disappears.

The people who live among wildlife act on a single truism: “If it doesn’t pay, it won’t stay.”

But they want these crises because they tend to stimulate fundraising.

The fact that wildlife protection suffers in the process seems not to matter.

This makes them worse than poachers.

Emmanuel Koro is a Johannesburg-based international award-winning environmental journalist who writes independently on environmental and developmental issues in Africa.