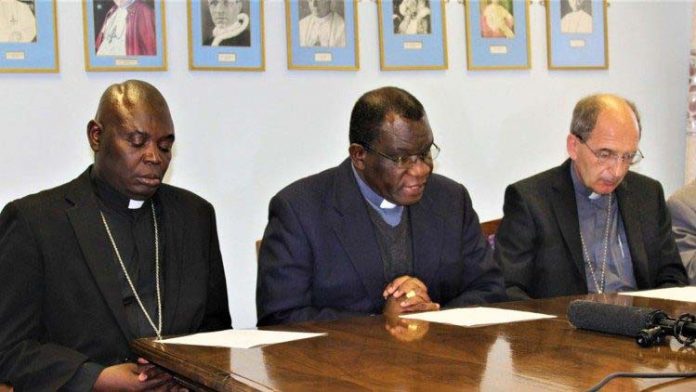 With time, the fissures began to show; the Catholics could not contain themselves and they started rumbling against the State of Zimbabwe.

This shocked me for the simple reason that this is a state born out of such great sacrifice, out of such love; why would anyone fight such with so much vilification.

Constructive criticism yes, but not condemnation!

And then to find the Catholic establishment twinning itself with the MDCs.

Why would anyone in his/her normal senses, anyone who purports to care for this land and its people, identify so unashamedly with a party whose agenda is to restore British rule in this country? British rule massacred thousands of Zimbabweans in the 90 years of its rule of terror.

Zimbabweans were brutally treated for defending their God-given right to their land, to their heritage.

British rule reduced the people of this land to abject poverty in the land of their birth; they looted more than a quarter of a million of cattle, all the fertile land and all the precious mineral wealth.

Something did not make sense?

Then gradually something became clear to me: Their involvement as partners of the British in the colonisation of our land.

They did assign a priest to accompany the Pioneer Column members who were Rhodes’ army for the invasion and robbery of our land.

That a priest, Fr Haartman, should accompany them on this satanic mission, saying Mass all the way for people on a murder and robbery mission was the height of betrayal of what they claim to stand for. It was the anti-thesis of who they claim to be — ministers of God, and priests in the Order of Christ.

These same Catholics would have the temerity to tell Mbuya Nehanda to ask God for forgiveness for fighting for her land.

Fortunately for us, Nehanda was not confused; Musikavanhu was not a fetish.

And she would not accept that they foist their fetish on her as a God.

She told them it was them, not she, who needed to be forgiven for having colonised her God-given heritage, her land.

These same Catholics wanted our people exterminated so that they could share the wealth of this country with the British.

They wanted to wipe out a whole people for the sake of material wealth — there was no trace of humanity, no godliness.

Seeking the genocide of our people is a crime against humanity and indeed they did share the loot of our land and cattle with the British.

I could not believe that they would continue with such betrayal; sooner or later I trusted they had to ask for forgiveness if they had to maintain their integrity in the commonwealth of Zimbabweans.

I thought they would repent  sooner rather than later, otherwise it would be utterly meaningless for them to preach love and sacrifice as the heart of their faith.

The Catholic rumblings erupted into open anger, into open warfare against the State of Zimbabwe.

At every election victory of ZANU PF, they were the spokespersons for the anger and vitriol of the MDC and the West.

I saw that the doctrine they teach, they do not practice and had no intention of ever practicing.

They would never change; they would continue to say Mass without ever asking for forgiveness for being armed  robbers armed with the Bible; they never asked for forgiveness from our people even as their gospel demands.

The warfare against the State of Zimbabwe escalated until the August 14 2020 when in their so-called ‘Pastoral Letter’ they officially declared themselves loudly and unequivocally as an enemy of the State of Zimbabwe, the very State which ended the satanic rule of the British.

To declare themselves an enemy of such a godly state without any justification was the final nail on their coffin.

They would betray all those who died excruciating deaths at the hands of them and the British; they would wrest from us the right to decide our destiny, and hand the head of Zimbabwe to Herod ( their British and Western masters),  the very right we restored to ourselves at the cost of at least 80 000 lives. This  is not forgivable; they should go back where they came from.

I thus turn towards Chimoio where thousands died for no other reason except love, those who, with their ultimate sacrifice, told us that we of Zimbabwe are royalty.