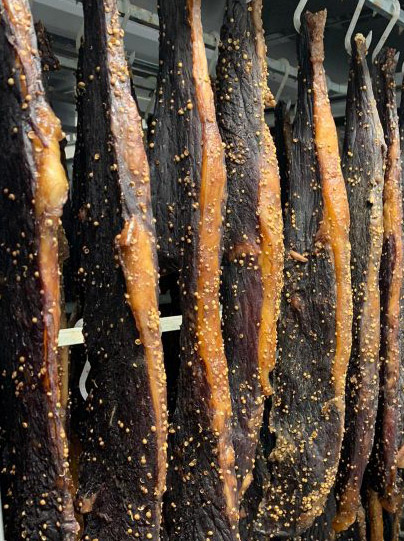 IN times of economic austerity, as is being experienced in Zimbabwe currently, young, astute and perceptive entrepreneurs are at their brightest and most innovative —creating new products or responding to gaps in the consumer markets with new innovations, brands and original commercial ventures.

Having received a sample of his unique, delectable export quality heirloom biltong, I sought to trace the indigenous origins of this wholly Zimbabwean delicacy.

Harking, back to the 4th Century, records of biltong-making existed among the early pre-historic San bushmen and early pastoral Iron Age Shona people of Zimbabwe. Chimukuyu, the indigenous sun-dried and seasoned meat as referred to in the Shona language, is as old as the language and the ancient peoples of MaDzimbahwe. Father D. Dale’s 1981/2012 revised edition of the Shona -English Dictionary defines ‘chimukuyu’ as uncooked, sun-dried meat (nyama yakaoma) also known in Zimbabwe, Botswana, Namibia and South Africa as ‘biltong’, but known in North America and elsewhere as ‘jerkies’.

Age old indigenous knowledge systems that have been dealing with climate change variability for centuries and generations learned how to adapt their lives, health and livelihoods to the water cycle of Zimbabwe. Building on such knowledge, they sought to prolong the shelf-life of meats by drying and smoking processes which eliminated contamination and preserved the health benefits of protein without the harmful active fats.

According to veterinary epidemiologist and cattle cultural studies expert Dr Tony Michel Monda: “Cattle are inexorably bound to the land of Zimbabwe. The ways of the people are embedded in the various socio-cultural beliefs of which cattle play an important part of our everyday socio-cultural milieu, language and gnosis.

From the 5th Century to the present 21st Century, Mashona cattle have been bred and raised in Zimbabwe, and are still going strong says a lot for the Mashona cattle breed. Originating from the Sanga cattle breed, the Mashona breed boasts an heirship of over eight hundred years, and Great Zimbabwe is believed to be its birthplace.

Archaeology, indigenous economic history and traditional orature give evidence to the age-old dynastic Zimbabwean Mashona cattle breed. Raised since the 5th Century, as evidenced on numerous archaeological sites in Zimbabwe, the international reputation of the breeds’ strength and resilience comes from many centuries of skilled traditional animal husbandry and select breeding.

During this era, Great Zimbabwe had the greatest population of Sanga cattle, namely the Mashona, Tuli and Nguni breeds in Southern and Central Africa.”

The zooarchaeology studies carried out at Great Zimbabwe and other related contemporary Iron Age sites has exposed the faunal remains of cattle in these settlements that reveal that between 1411 and 1550, an elite Shona ruling class kept abundant herds of cattle in the Hill Complex and Great Enclosure at Great Zimbabwe. These findings allude to the historic importance of biltong  which was the most effective way of preserving meat protein in the ancient history of Zimbabwe. Strips of biltong were found in some crevices of caves, and lined on pottery shards and traditional basketry, alluding to where the meat was stored or dried.

The dynastic rulers of Great Zimbabwe created a thriving agro-economic commercial and religious centre with sophisticated military, scientific, ecological and artistic centre in Southern Africa, where the Mashona cattle breed played a pivotal role as part of our agro-identity and cultural tangible heritage and identity. Due to the plethora of livestock, It was probably at Great Zimbabwe where the legacy of biltong spread to other parts of the empire.

In Zimbabwe, archeological studies show that this culinary heirloom harks back to the hunter-gatherer times.

It is on record that several types of herbivores were hunted and sun-dried by the cave-dwelling peoples as well as the late Iron-Age hunters known in Shona as (vavhimi ne vadzimba.) This class of peoples were greatly respected in the early years of Shona civilisation, given their role as the custodians of food security in any given settlement or clan unit. Further research conducted by archaeologists at various stone ruins and settlements reveal the types of animals that where hunted and its meat preserved as biltong.

Sun-dried biltong was a major product of the ancient hunters and nomadic travellers who developed ways of preserving meat for the communities and families for the lean times. Biltong was also a treasured form of protein/currency, where strips of sun-dried meat were traded for grains, beer, snuff, metal tools, weapons, labour and sometimes even presented together with the dowry for a new bride.

Investing time and savings to research, develop and create his own indigenous herb-flavoured, unsalty succulent and spicy biltong brands, Tembo began his small enterprise venture in 2017 in Helensvale, Borrowdale, at a time when beef prices were beginning to escalate and the cattle industry was dwindling.

Meat protein shortages saw the introduction of soya chunks as a protein substitute for beef in Zimbabwe. The shortage of beef, at that time, stirred the idea of preserving meat for more austere times. It was the identification of this niche market in the beef industry that prompted Tembo to research and develop his own brand of Zimbabwean heirloom biltong.

However, as the beef cattle industry slowly began to revive in the last few years, the biltong business began to resuscitate on the meat market and still remains a prime value-added product in the Zimbabwe beef value-chain.

Tembo’s passion for processing meats and supplying reasonably priced bulk beef for home and commercial delivery has began to reap results and gain momentum in the meat industry.

No doubt Zimbabwe is open for business!