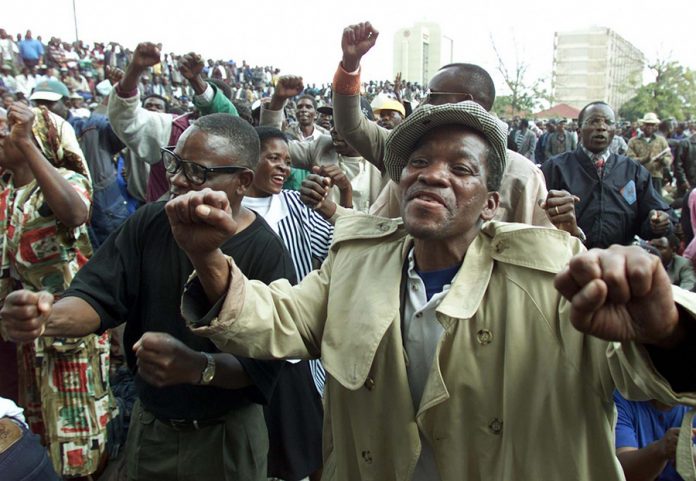 Kana ndafa nehondo….’goes the refrain of one Chimurenga song sang by combatants during the armed struggle.

This article is dedicated to the memory of the late National Hero, the late Brigadier-General Felix Muchemwa, the young firebrand who became a guerilla medical practioner and passed on, on June 13 2016; a comrade and freedom fighter par-excellence

In this article, we continue last week’s rebuttal of what Newsday claims is a travesty to recognise and assist war veterans who were recently accredited by the Government of Zimbabwe.

In a family, whenever there isn’t sufficiency, we share; each gets a smaller piece so all can have something.

In your book, there isn’t enough in the nation’s economy, the solution is to tarnish and banish the freedom fighters into oblivion, to forget about them, write them off history, they just don’t exist!

Why be so cruel to fellow Zimbabweans who laid the foundation stone on which you categorically refuse to build a credible edifice.

The economy you characterise as just waiting for combatants to be paid out some assistance so it collapses, is not a normal economy if it cannot accommodate its own, especially those who eschewed to be at peace until they had rescued the nation from the jaws of the British crocodiles.

If it cannot accommodate its own, whose economy is it? If it is ours, it should look after all of us.

Have you ever wondered why we seem to be perennially poor despite that per capita, in terms of minerals, Zimbabwe is the richest country, and still we have strategic minerals which the world powers covet in order to maintain their military and economic superiority.

Zimbabwe has the largest diamond reserves in the world — and the best quality diamonds at that, ask the looters and plunderers, they will tell you it is true.

We have vast gold reserves, which have been famous from the days of Mwenemutapa. To date, we still harvest tens of tons of gold per year in this gracious country.

Surely such a rich country can take care of those who fought and defeated the British looters and plunderers so that today we can oversee our own riches and decide how to best harvest them for our own purposes.

Are you perhaps one of them that you are livid that these triumphant heroes are:

Are you bothered at all that many of them have passed on between 1980 and 2022, leaving behind penniless dependents who are still struggling to survive. If Zimbabwe were made up of such like you, these would be permanently condemned to destitution.

You want us to believe that you don’t know why it is that:

The Zim dollar’s flight down the precipice is accelerated to supersonic speed, whenever we approach elections, in that case you would be the only one who doesn’t.

The anti Zim, anti-land, anti-liberation illegal sanctions of the West which are instigated by the British armed robbers whom we defeated have taken their toll on the economy, for decades now.

When we talk of freedom fighters, we talk of sons and daughters of Zimbabwe who dedicated everything, including their lives, for Zimbabwe. Perhaps you cannot imagine what this entails, we will help you with a few examples.

You are the first African lawyer in Rhodesia; you risk it all by defending nationalists and freedom fighters against an amoral trigger happy terrorist white regime,; you get a high paying job as Director of Prosecutions and you abandon it all to start the Chimurenga War.

You are arrested for working with ZANLA and hosting the spirit of an ancestor warrior and subsequently your father is arrested and tortured to death, a nephew is hanged because he is ZANLA, your mother and sister are incarcerated at Chikurubi, you are tried for high treason and you are sentenced to 30 years with labour. Meanwhile they loot your livestock, even chickens. When you finally get out of prison, there is nothing left at your homestead, it is just bare ground and a shovel.

You leave a wife and children for the struggle; you’re sold out, as a result your mother and father, uncle and wife are arrested and each sentenced to three years imprisonment. Your cattle and those of family members are looted as part of your punishment.

You’re teaching at university, and life offers you all the material comforts and you heed the call to the struggle, abandoning it all

You’re studying at university, at secondary school, at primary and you abandon all the comforts of home and the promise schooling offers for the liberation struggle

You’re ZANLA, ZIPRA, and every day you fight, facing death each day, battle after battle and you never look back. Your comrades are killed every day in combat and you still rise up, take your gun knowing full well that you are next and your day comes and you die still declaring: Pamberi ne hondo, ini ndagumira pano, shinga comrade!

This is the story of each freedom fighter; abandoning all and leaving for the struggle with nothing but the flame of your absolute love for Zimbabwe in your heart.

You and these are worlds apart. It is such whom you indict and condemn to abject poverty charging that their fate has nothing to do with the fate of Zimbabwe and should no more be related to Zimbabwe’s economy because they are the greatest threat to this economy.

Does it ring a bell that the so-called opposition boasts the West will not loosen its stranglehold on Zimbabwe until it is in power, utterly forgetting that it is not the West who decides who rules in Zimbabwe but the people of Zimbabwe?

You do know there is a siege on the Zimbabwe economy by the West which has been going on for decades.

Do you remember that of the so-called targeted sanctions the target were the war veterans, the chief architects of the armed struggle:

Then why do you pretend you don’t know that after the war the veterans were paid $50 000 and the economy was severely punished by the West. You pretend that you don’t know that since the land reform took off, we have been consistently punished by the West for compulsorily acquiring that which the whites had looted from the people of Zimbabwe during the British colonisation of our land

The sanctions imposed on Zimbabwe by all major international institutions controlled by the West had no other purpose but illegal regime change so that the land rights of indigenes are reclaimed by whites.

And who to punish more severely than the war veterans who actually fought the war which defeated white robbery of our land, and actually led the Third Chimurenga which restored land to the masses of Zimbabwe.

And so in 2022 or 2023 or whenever the recently accredited freedom fighters are awarded pensions, if the economy is punished once again by the West, as in1997 and beyond, we should not forget who we are: ‘Children of Murenga, who was exhorted by Musikavanhu kuti ‘nhaka haitengeswi!’