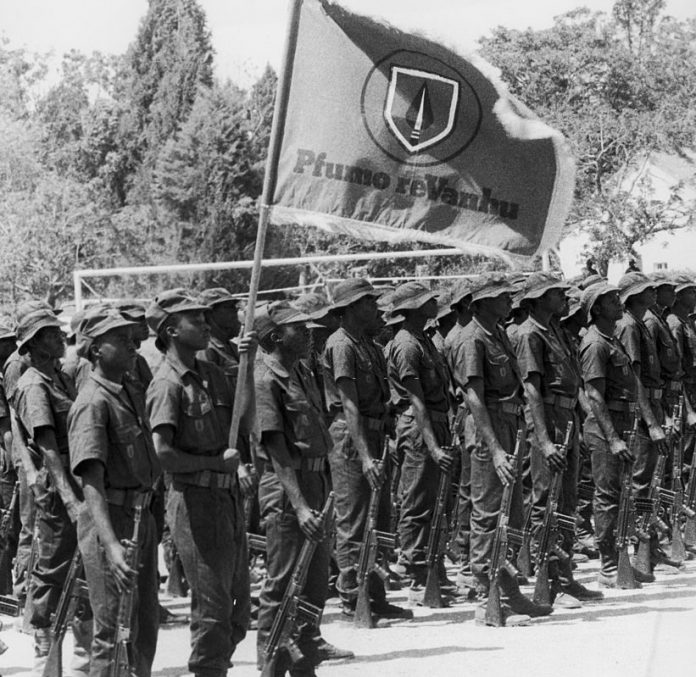 WE celebrate Day of the African Child, June 16, a most heroic moment for the continent.

During this period, we also wish to cherish the heroism of the masses of Zimbabwe as we refuse to accept what NewsDay accuses, that the masses are pawns in the hands of ZANU PF.

It is mischievous to claim that the restrictees, detainees and war collaborators recently accredited by Government will now vote for ZANU PF because of the financial assistance that they will receive.

It is tantamount to calling them mercenaries.

When you see these war veterans, these restrictees, detainees and war collaborators, you see people without a sense of right and wrong.

They stood for what was right during the liberation struggle; they never wavered, thus it was possible for us to triumph.

Among the masses, the sellouts were in the minority.

The majority fought on until final victory, but it was not easy. They were vulnerable and the enemy was ruthless, trigger happy even, as the excerpts below will illustrate:

“It was on Monday morning when the RF forces, Rhodesian Front, arrived at our home. As a young boy (9 years), I was busy milking the goats.  A lovely dog of mine barked in a strange way and I stood up to see what was happening.

The sound of a gun was heard. My dog was shot dead, green colours were everywhere. Those were the RF soldiers who were questioning my father and mother. Some were standing around the goats’ kraal asking me the whereabouts of the terrorists (guerillas).

One of those soldiers jumped in the kraal and threw me out. I landed on a rock and became unconscious for some time. When I woke up, I found that my father was standing next to me and his body was red with blood. He was crying like a helpless child. He was wearing handcuffs on both hands and feet. He was taken to the police and the following morning we were told that he was dead.

The brutality of the regime was clearly revealed to me and I decided to join the struggle.”  (Schools in the Struggle:1991)

But the masses stood for the truth despite such Hitlerite brutality.

“They (the Rhodesians) headed for the residence of Headman Makombe. They got to his homestead and accused him of harbouring ‘terrorists’ (guerillas). The Rhodies there-and-then convened a kangaroo court, tried him and found him guilty.

It was a court in which his defence did not matter. They were out for blood. And they executed their brutal judgment.

Headman Makombe was bayoneted in the belly. He died with his intestines hanging out. Two days later, we found his grandson who was with him at the time, shot dead in the nearby maize field.

As a mujibha, I was busy assisting the villagers to escape. Most villagers escaped into nearby mountains. From Gororo Village, the Rhodesians proceeded to Magwaza and then Mhlange villages. Finding no people to harass and brutalise, they began torching homes. (ZHT:2018)

Every single moment, every single day, the Rhodesian soldiers, Selous Scouts and Abel Muzorewa’s Auxilliary forces hunted and harassed the people throughout the land — but Chimurenga fire raged on until final victory, against all odds, despite such haunting vicissitudes.

This is what it cost to free this land. The masses carried the burden of Zimbabwe; they knew what they were doing. Costly as it was, they chose to do the correct thing, to do what was right.  They could have reneged but they did not, they carried their half of Zimbabwe.

Even after they had suffered so much and the war was won, and the Rhodesians and their British parents had signed their terms of surrender at Lancaster House, in the period leading up to the elections, they still were not left in peace; every effort was made to force their vote to favour the Rhodesians as Muchemwa (2015) chronicles:

“On January 6 1980 Lord Soames (the governor who was supposed to be an impartial referee to ensure free and fair elections) was the first to break the ceasefire agreement by redeploying pro-Rhodesian security forces, among them 15 000 of Muzorewa’s Auxilliary forces.”

They were redeployed for the express purpose of harassing and intimidating the masses so that they would not vote for the liberation forces:

“In the countryside, redeployed Rhodesian Security Forces openly distributed anti-Mugabe leaflets, and Muzorewa’s security forces auxiliaries openly campaigned for their leader on the pretext of teaching people how to vote. Besides preventing PF supporters from campaigning, they also threatened them with death.”

This is the avalanche of harassment and intimidation the masses were put through to force them to abandon the liberation cause and give victory to their oppressors and exploiters.

In the end, ZANLA had no choice but to redeploy some of its own forces, predominantly political commissars who were ordered to bury their arms and live with the people.

It was extremely harsh and ‘treacherous’ for the masses, but they stood for what was right — their land.

Money was also spent lavishly to sway the vote so that Muzorewa and the Rhodesians would win, but the people of Zimbabwe would not sell their birthright for a bowl of soup.

Throughout then, the masses stood for what is right, though the enemy of the land made it sheer hell for them.

It is, therefore, mischievous to suggest that they can be bought. They have never been bought throughout our history; they cannot be bought by anyone today.

Such calibre of people deserves our deepest honour and reverence; they paid a harsh price for Zimbabwe and no amount of pain nor money swayed them.

You may wish for the return of British imperialists and Rhodesia but you cannot change history; the masses played a sterling role during our liberation struggle and that cannot change. They are our heroes and no amount of mudslinging can make them stand for what is not right.

They are not mercenaries.

The masses have been tried and tested and they have been unwavering in standing for what is right. No amount of suffering has cost them to abandon the right path, and no amount of money or privilege has corrupted their sense of right or wrong.

The capitalists say: ‘Every man has his price’, but not so for the masses of Zimbabwe.