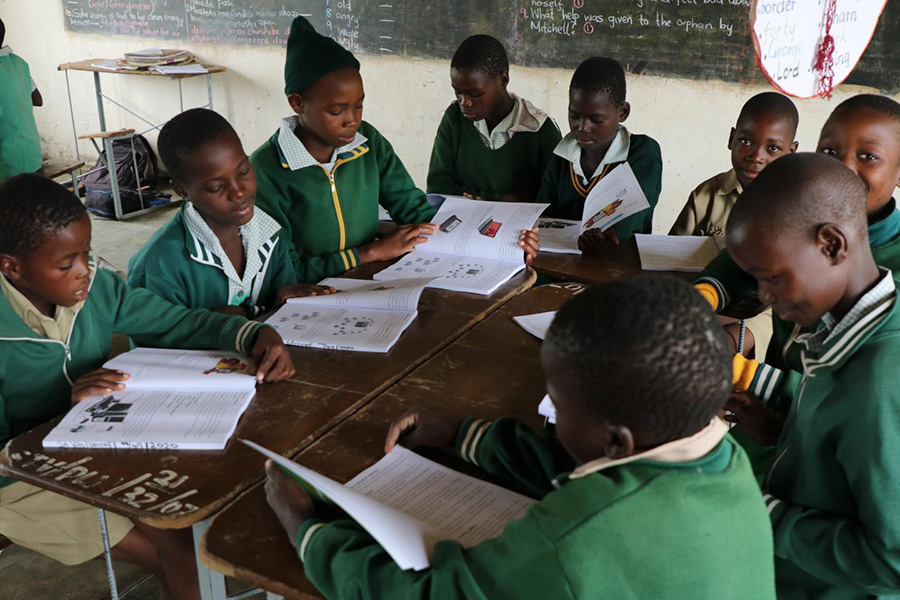 PUNDITS of the non-phonetic, Look-and-Say Method, insist that children can break into the world of the written word through guess work, so called word recognition, but without knowledge, understanding and use of the alphabet — this is not reading, it is blind reading.

‘Look Mother Look,’ reads the text in a ‘Sunrise Reader’ for beginners.

There is a picture of mother and two other people on the page, even a dog.

‘Look Mother’ is repeated several times on the page; and this style is repeated throughout the book.

Words are repeated over and over again.

How does the child know that the word is ‘mother’ without engaging the alphabet?

Is it because there is a woman in the picture?

It certainly is not because of the way the word is constructed. Close the book and write the word on a plain piece of paper and the child is lost.

What breaks your heart is the helplessness of the child.

He/she has no idea how to read, how to tell the word from the letters of the alphabet which make up the word, though the look-and-say pundits insist that word recognition works.

Without the understanding of the alphabet, it does not work, the child does not recognise the word ‘mother’ outside the book, outside the particular page and the accompanying picture.

Essentially, the child is blind, is not literate, cannot be literate without knowledge of the letters of the alphabet. Thus, this Grade Two child is iliterate; he/she is locked in the ignorance of the look-and-say method.

The injustice to the child here is that its linguistic intelligence is forced to lie dormant, to operate at zero capacity.

But then, something crushes in the mind of the child; the crush comes about because the child is intelligent.

Like all other children, he/she is endowed with linguistic intelligence, inborn, and yet he/she is being forced to operate unintelligently.

Each intelligent person wants to use his/her mind to make sense of reality, to manage situations.

But children are being denied this.

Children are active meaning-makers and when the teaching and learning process denies them the opportunity to use their minds to make meaning, something does not work in them.

They cannot be at peace, they know they can and yet they are blocked.

When the child sees the word ‘mother’, which he/she has been repeating from memory but no longer recognises and looks at you with tears in his/her eyes, pleading that you tell him/her what the word is, you might tell him/her the word is ‘mother’, thinking you are just reminding him/her, but that is not the case. Go to some pages further in the book, a page the child has not read before, and he/she will still not recognise the word ‘mother’.

And this time, it is your heart which bleeds for you realise the tragedy — the child is literally blind.

It is ‘Look Mother Look’ which the child remembers, not the word ‘mother’.

You realise that something has failed, that this method of teaching reading does not work. It is killing the child intellectually, his/her self-concept and self-confidence are eroded. The child cannot rely on his/her intellect to navigate the learning process and this is a travesty.

Education, if it is correct, should empower the learners, not to disable their minds such that they no longer operate independently and are forced to remember only what they are told.

In the hierarchy of learning competencies, remembering ranks among the lowest intellectual potencies.

Once the child forgets what he/she is told, he/she is totally lost. The child cannot rely on his/her own intellectual capacity to handle the situation.

This is a grave injustice to the child.

The look-and-say method has far reaching effects on the development of the child’s linguistic intelligence.

A recent interaction I had with a Grade Four child still distresses me.

He can say the word ‘happiness,’ yes, but cannot write it, he does not know how to spell it.

What the child does is go through the book ‘a Sunrise Reader’ to see if he/she can find the word anywhere. He/she tries to remember if he/she has ever seen the word somewhere.

You hurt so much as you realise how illiterate the child is; how his/her mind is totally incapacitated to read the word ( to literate), that is to accurately name the letters and pronounce the word; the child does not seek to think through how to spell the word. He/she falls on mnemonic capacity, one of the lowest capacities in linguistic intelligence: ‘Can I remember it, have I seen it somewhere, the child searches frantically?’

The child does not ask what letters give him/her this word — he/she has not been taught this way.

You stop the child from resorting to guesswork.

You task him/her to listen to the word and then try and spell it.

You ask what is the first letter the second and so on, and it is an uphill struggle.

Eventually an ‘h’ is identified and so on, but this is the word the child has read blindly many times.

After four years of schooling this child has perfected blind reading; he/she doesn’t spell anything, doesn’t sound anything, just looks and says and this cripples linguistic intelligence.

What happens to the mind when you repeat something without any understanding of it until it sticks?

What actually is happening to the mind; it processes nothing, and something is just pasted onto it by repetition?

What happens to the mind, it gets upset; it is an extremely intelligent, active organ and when it is forced into limbo, something does not work in the child.

And will this child ever learn to write, to compose anything?

It is a travesty.

This means that something has failed to take off.

Did he understand the rest of the sentence at all?

Could he construct the sentence on his own, how would he do it when he had no clue how to work out the spelling of one word?

What about the rest of the words which make up the sentence.

The pundits of the Look-and-Say method of teaching reading have no excuse for choosing this method over the phonetic method which equips the child to decipher each word independently using the alphabet; using the sounds of the letters of the alphabet to read and spell the words.

Why would you chose a method which disables the child over one which spurs on the development of the child’s linguistic intelligence and gives him/her literary independence?

When you can and you are blocked and consistently told you cannot, you crush.

When children cannot feel correct in themselves, they cannot be at peace.

Literacy is critical in the psycho-social development of the individual and no-one captures the veracity of this better than the Brazilian Liberation Education icon, Paulo Freire (1970):

“I want to learn to read and write so that I can stop being the shadow of other people, no longer part of the mass but one of the people….”