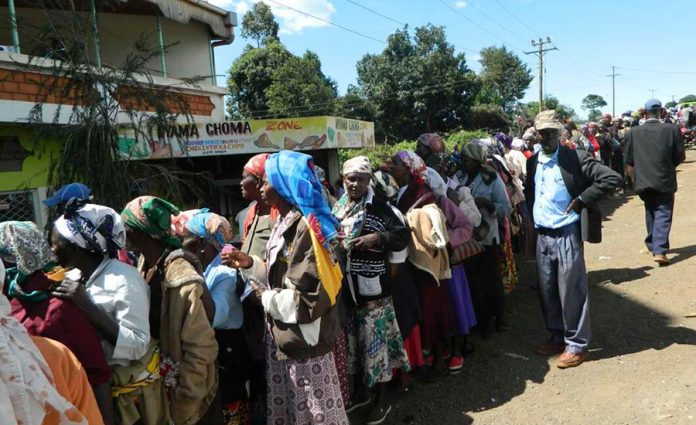 THE move by a group of Kenyans to file a case against the British government at the European Court of Human Rights (ECHR) last week over colonial-era land theft, torture and mistreatment of the Talai and Kipsigis should sound a clarion call to other former colonies.

These people were forcefully pushed away from the fertile Kericho County, now a prime area for tea plantations owned by large multinationals.

This is so given the rampant manner in which Britain, European nations, together with their allies across the Atlantic, the US, continue to abuse black people through interfering in their internal affairs and railroading them to advance capitalist interests.

Western countries perpetrated some of the worst human rights violations during the colonial era which was preceded by the slave trade, the anchor of Uncle Sam’s now faltering economic dominance.

Zimbabwe, now post-colonial victim of the West’s politics of aggression, witnessed some of the most heinous crimes against humanity when Rhodesians bombed and killed thousands of civilians at refugee camps in Chimoio and Nyadzonia, among other refugee camps.

Not even the colonialism-induced trauma suffered by millions of Zimbabweans, whose wounds will never heal, has done little to cull the West’s desire to once again lay siege to the country’s very lifeline.

But Kenyans are having none of it.

They say they want an investigation and are seeking redress for the hideous crimes committed by the British in Western Kenya’s Kericho region.

They want compensation to the sum of US$200 billion.

“The UK government has ducked and dived, and sadly avoided every possible avenue of redress. We have no choice but to proceed to court for our clients so that history can be righted,” said lawyer Joel Kimutai Bosek, who is representing the group.

Marauding British colonialists evicted the Kipsigis and Talai in the early 20th Century from ancestral lands around Kericho which is now a major tea-growing region today farmed by large multinationals, including Unilever, Finlay’s and Lipton.

In 2021, they took their case to the UN where a panel of special investigators merely expressed ‘serious concern’ at the UK’s failure to offer a public apology or acknowledge their share of responsibility for these colonial-era abuses whose ugly scars are still haunting these Kenyans.

The victims, more than 100 000, were signatories to the UN complaint filed in 2019 where they demanded an apology and reparations for their land being plundered and parcelled out to British settlers who used the fertile soil to cultivate tea.

Kenya is the third largest producer of tea in the world, according to FAO Intergovernmental Group on Tea Report, producing 473 000 tonnes of the product while employing more than 100 000 workers and 560 000 smallholder farmers.

It contributes four percent of Kenya’s GDP and 22 percent of that country’s export earnings.

But lawyers for the Kipsigis and Talai said the British government’s arrogance has been on display as it refused to meet with the victims or their representatives.

They said they tried to meet British Foreign Secretary Liz Truss in May this year but were rebuffed.

“This is a historic day,” said Paul Chepkwony, the outgoing Governor of Kericho County, who has fought side by side with the victims for reparations for years.

“We have taken all reasonable and dignified steps.

But the UK government has given us the cold shoulder.

We hope for those who have suffered for too long that their dignity will be restored.”

The UN says more than 500 000 people from the Kericho County were subjected to gross human rights violations during the colonial era which included unlawful killings and violent displacement from their ancestral land.

The stolen land, the UN says, has become profitable to multinational corporations while the real owners are still smarting from the loss of their asset.

The victims were forcefully evicted from fertile land in the highlands of the Rift Valley and the settlers forcefully moved every member of the clan was forcefully moved to detention in a tsetse fly and mosquito-infested valley near Lake Victoria.

The conditions there were so punitive that many of them died and women suffered miscarriages while they also lost their livestock in large numbers.

“We are talking about separating families.

Some people getting lost, never to be seen again.

There is, however, not likely to be any joy for the victims, with reports indicating that the British government is not willing to contend with yet another embarrassment of admitting that it is indeed a mass murderer.

A case for Zimbabwe

On September 12 1890, robbers, calling themselves the Pioneer Column, claimed to have ‘discovered’ a country which they then ‘founded’ by hoisting the Union Jack on Harare and ‘in the name of Queen Victoria, took possession of Mashonaland and all other unpossessed land in south-central Africa that it should be found desirable to add to the Empire’.

This ‘discovery’ and ‘founding’ of the country marked the beginning of nearly a century of colonial bondage which was characterised by killing of thousands of Zimbabweans by the colonialists.

Our estimates put the numbers of those who were killed by the settlers as well as their kith and kin at more than 200 000.

And not a single family or household was spared from the brutality of the colonial regime.

Today, there are unmarked graves both within and outside the country’s borders, victims of the First and Second Chimurenga, an indicator of the brutality of the colonialists.

Consider the following: “…this involved attacking the people, particularly peasants in the areas near the borders of the country,” notes Fay Chung in Re-living the Second Chimurenga.
“The Smith forces attacked with increasing ferocity in a desperate attempt to wipe out all support for the guerillas.”

In a paper titled: ‘Rhodesian Anthrax: The Use of Bacteriological and Chemical Agents during the Liberation War of 1965-80’, former CIA intelligence officer Ian Martinez quotes a Rhodesian officer who attested to the fact that the outbreak was a planned mission.

“It is true that anthrax spoor was used in an experimental role in the Gutu, Chilimanzi, Masvingo and Mberengwa areas, and the anthrax idea came from army PSYOPS (Psychological Operations Unit),” quotes Martinez.

“The use of anthrax spoor to kill off the cattle of tribesmen was carried out in conjunction with the psychological suggestion to the tribes people that their cattle were sick and dying because of disease introduced into Zimbabwe from Mozambique by the infiltrating guerillas.”

Is it not also high time that Zimbabwe considered suing the British government for stealing our land, abusing our people and now continuously interfering in our internal affairs?