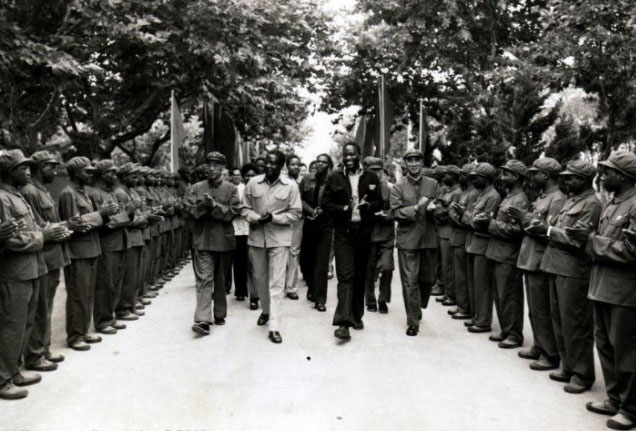 AS we mentioned last week, ZANU was founded 60 years ago on August 8 1963 and its mission was to confront the whiteman with force of arms.

ZANU did not waste time in pursuing this goal.

Within six weeks of its founding, it dispatched its first group of cadres for military training.

Thus, on September 22 1963, the first four cadres; Emmerson Mnangagwa who was the leader of the group, Edison Shirihuru, Jameson Mudavanhu and Lovemore Svosve were sent for training in China.

They did a six-month course in military science, military intelligence and political ideology.

A second group was sent to Ghana for military training and then to China for instructor’s training.

Still, a third group, made up of 11 cadres led by Josiah Tongogara, was sent to Nanking Military Academy in China to train in guerilla warfare.

And the stage was set for the Second Chimurenga to commence.

This was the nucleus of ZANLA.

Some of these very first guerillas were to make headlines in the hearts and minds of the people of Zimbabwe in just a space of months.

The white menace had to be fought by force of arms and, by 1964, the whiteman was no longer at ease.

Cde Thomas Ziki, aka Mupetabere, one of the first cadres sent for military training by ZANU, made his debut as a young guerilla fighter in 1964.

He describes his exploits in an article titled: ‘A spectacular successful explosives mission’:

“I spent the whole day at the township, a typical village boy who did not raise any suspicions.

When night fell I became the guerilla that I was.

I would not just be hitting the shop, we had been trained to cause maximum damage

I stood at Bhasera Business Centre in Gutu.

I was on home-ground and so familiar with the terrain. But I was no longer the same village boy, I was a trained guerilla.

I had received military training in Egypt at Hierapolis Military Training Camp where I specialised in sabotage engineering.

We were the very first guerillas to infiltrate the country, to carry out a military attack.

I was part of the group that had the likes of President Emmerson Mnangagwa, we are the only two remaining survivors.

Our mission was to carry out sabotage acts to mark the beginning of the war.

We were not fish out of water as the Rhodesians would want to portray because we had begun working with the parents from the onset.

My group got into the country through the Chirundu Border Post. To the Rhodesians, we were just youths travelling around.

The year was 1964 and I was deployed to Gutu, in Masvingo Province.

That is when I was approached by Solomon Marembo who had come on behalf of the community of Bhasera Township with a request.

There was a rabid racist Rhodesian businessman nicknamed ‘Makaki’, trading as African Stores, who had become a thorn in the flesh of the people around the area thus they requested our intervention.

Marembo supplied me with dynamite and detonators clandestinely procured from the Shabanie and Mashaba Mines through a relative of his who worked at the mine stores.

In the drizzling weather, I headed for the township of Bhasera (Bhasera Business Centre).

I spent the day checking out the Rhodies’ shop.

I got in and bought a soft drink that I leisurely drank as I took mental measurements and checked out the best spots to place the explosives.

The mission would be a spectacular success.

The shop was filled with drums of oil and paraffin.

I was given a bicycle.

It was my ‘getaway vehicle’.

I spent the whole day at the township, a typical village boy who did not raise any suspicions.

When night fell, I became the guerilla that I was. I would not just be hitting the shop, we had been trained to cause maximum damage.

Thus I headed for the dip tank where I set up and timed the explosives, then I cycled back to the shop and placed the explosives in the corners where the drums of paraffin were.

I then furiously cycled away.

I would not be turning back to reset the explosives for, much sooner than I expected, loud explosions ripped through my ear.

They burst so loud in my ear that I thought I had not pedalled hard enough to be out of range of the explosives.

But I was far enough, far away; it was a spectacularly successful mission.

I pedalled on, furiously. I crossed the Devure River.

And just before I got to Nyika Business Centre, I went to my contact point where I left the bike.

I then walked to Nyika Business Centre where I promptly got a lift to Masvingo.

At dawn, I was already in Masvingo.

Frantic searches and cordoning off the area were futile, I was long gone.”

These were the first acts that signified the beginning of the armed struggle.” (Zimbabwe Heritage Trust archives).

I (this writer ) was eight at the time of this spectacular explosion.

African Stores was situated on the periphery of the township, near Bhasera Dam and the dip tank.

On the night of the explosion, as children in deep slumber,we heard nothing, but the adults told us they knew something had gone down.

For a long time we avoided our usual paths to the dam and the forest around where we used to foray for wild fruits.

For a long time the police cordoned off the area, harassing people.

After a long time, it became possible to visit the ruin of African Stores and see the burnt wreckage.

The owner abandoned African Stores and it was sweet victory for ZANLA.

ZANLA came to Bhasera Township in 1964.

I was only in Grade Two and the Second Chimurenga had begun.

I was privileged to be in the vicinity of the first shots of the Second Chimurenga.

Whites had tried to intimidate us by banning ZANU, but it had not worked.

Here were the first acts of ZANU, the Party they thought they could obliterate.

As children we had sang :

We were requited, vanamukoma (freedom fighters) came and started operating.