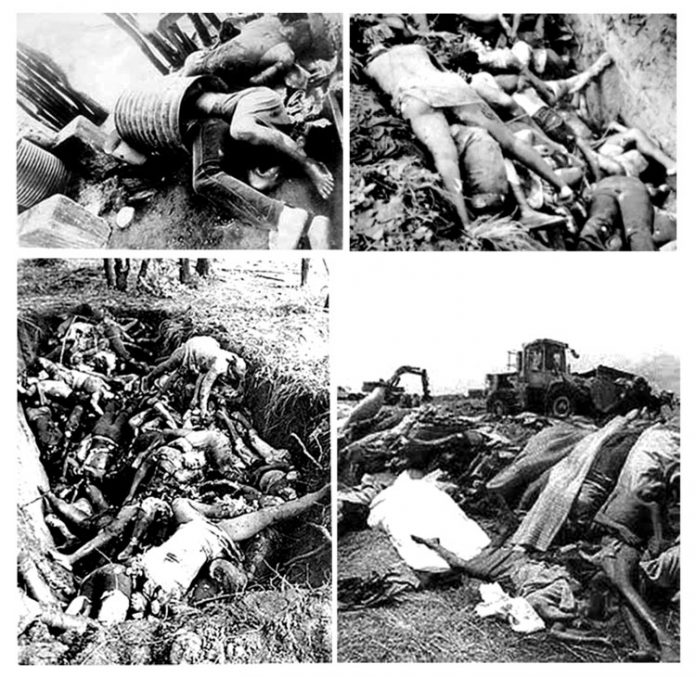 in history,” when in fact Chimoio was

There can be no victory to celebrate

for any sane human being when you

The Rhodesians celebrated, but it was

to be their very last celebration.

After Chimoio, they lost every single

After Chimoio, every epic battle was

won by the guerillas.

Chimoio was the last bridge to

We continued winning, forcing the

Rhodesians to beg for negotiations as

they could no longer stand the heat of

The Rhodesians were still celebrating

the so-called greatest battle in Southern

Africa, insisting they had dealt ZANLA a

death blow when we hit them.

less than a month after Chimoio.

a key strategic base for launching air

raids into Mozambiqude, was caught

napping; they were watching a movie in

They were convinced that the Chimoio

Raid of November 1977 had demoralised

the air force Base.

The Rhodesians were so overwhelmed

they only feebly returned fire.

By the end of the attack, there

were zero ZANLA casualties while the

Rhodesian base was left in ashes.

It was a complete victory.

ZANLA, the giant, was now in

full control. This was just the first

installment in an endless litany of

Chimoio had launched a relentless

ZANLA had been wounded at Chimoio

but not disabled; the wound was in the

heart, in the soul and it spurred them to

Rhodesia would not accept that at

Chimoio, in their so-called Operation

Dingo, they had fired their last effective

They would not listen to the message

at Grand Reef Air Base.

attacked the ZANLA operations Base in

the Vanduzi Mountains, only 15km from

the Chimoio HQ base.

This is the military base Rhodesians

had avoided when they attacked the

Chimoio Base in November 1977, which

For three days, Rhodesians, with their

Hunters and Canberras, tried to bomb

the base but were repelled.

They left without inflicting a single

casualty among the ZANLA. ZANLA was

The next blow against Rhodesia was

in Southerton in the heart of Salisbury

It was a crippling blow.

Rhodesia had to reduce its fleet on

the roads and in the skies, giving ZANLA

The section of illustrious combatants,

a team in their late teens and early 20s,

accomplished a daring feat and got

away withj it, unscathed, all of them.

ZANLA had come to town, with

person was safe in Rhodesia anymore –

a chapter had ended for Rhodesia.

The land of Nehanda could no longer

be a home for the armed robbers.

By September 1979, Rhodesians were

but they thought they could steal

victory from ZANLA by launching a

massive attack in a combined operation

with South Africa on the ZANLA and

Frelimo strongholdon Mapai, in the Gaza

The raid began on September 6 while

the Lancaster House Conference was to

They planned that a victory against

ZANLA would give them victory at the

Rhodesians lost the battle of Mapai.

of the Gaza Province, together with

Frelimo counterparts, drove them out

so harshly they were not able to collect

Another unmitigated victory for

But the Rhodesians would deny the

lesson that glared them in the face –

they could not defeat ZANLA on the

battle field but they still went on to

plan another attack against ZANLA, still

plotting to steal victory at the Lancaster

From October 2 to 5, the Rhodesians

assaulted the ZANLA base at Mavhonde

with lynxes, Hawker Hunters as well as

armoured cars, with the Selous Scouts

as the main human contingent.

The base was only 20 km off the

They miscalculated – they thought

that with ZANLA Supremo Josiah

ZANLA forces would be weakened.

But ZANLA was not found wanting, it

was equal to the task.

Once again they lost; the Selous

“We knew that we could never beat

them. They had so much equipment

and there were so many of them. They

would just keep coming with more and

fire against the Rhodesians was well

The Rhodesians did not succeed in

weakening the negotiating position of

the freedom fighters; it is the Rhodesian

hand which was weakened at the

It was victory upon victory!

After Mavhonde, Rhodesia had to

admit it was over but, in fact, it had

been over at Chimoio – they had fired

After Chimoio, it was not possible to

lose any more battles and we did not.

Rhodesians put a signature to their

We have not lost a single battle since

Chimoio, we have won every single

epic battle and we are still counting the

victory in their history when, in fact, it was their final undoing.