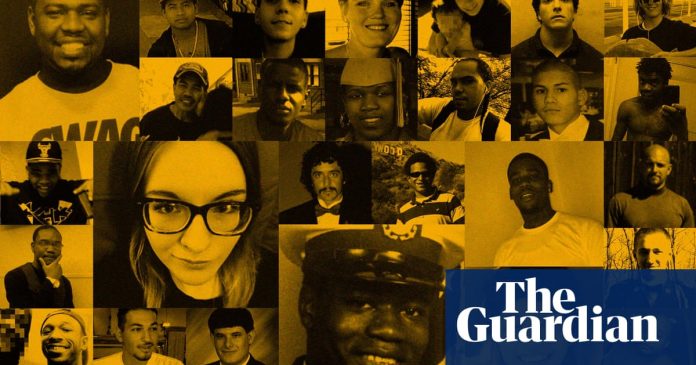 THE cases of African-Americans killed by the police in the US are just too many.

Despite only making up 13 percent of the US population, black Americans are two-and-half times as likely as white  Americans to be killed by the police, the records reveal.

On May 25 2020, George  Floyd, a 46-year-old black American resident of Minnesota, was killed in police custody, while unarmed.

Floyd is not the only one on the list of killings by American police.

Just like that, the  emergency medical technician was gone!

The killings of African-Americans by police make a mockery of US’s claims of being the champions of democracy.

In Las Vegas, New York, Keith Childress was killed on December 312015 when marshals who were conducting surveillance on the man requested help from Metro after he  fled.

When police caught up with him, they claimed Childress had an ‘unknown object’ in his hand.

Assuming it was a gun, they shot him dead.

The object turned out to be a cellphone.

No officers were charged with the murder of childress.

Bettie Jones was killed on December 25 2015 in Chicago, Illinois.

Police shot Jones in the neck ‘accidentally’ while she was trying to help her neighbour deal with a domestic disturbance.

The neighbour said he called the police when his son tried to break down the door early in the morning, and Jones was shot when she opened the door to direct officers when they arrived.

No officers have been charged  with a crime for killing Jones.

Another African-American death is of Kevin Matthews who was murdered on December 23 2015 in Dearborn, Michigan.

An officer pursued Matthews who was reportedly wanted on a misdemeanor warrant.

The officer attempted to subdue Matthews with pepper spray and shot him during a scuffle.

Matthews was being treated for schizophrenia. No officers were charged for killing Kevin.

Michael Noel was murdered on December 21 2015 at St Martin, Louisiana.

He was having a psychological breakdown and his mother requested an order for protection.

Police said that when they arrived, Noel resisted arrest and could not be subdued after two Taser deployments.

Noel’s aunt said he was then shot in the chest.

Two witnesses said Noel was unarmed, with one handcuff around one wrist when he was shot. No officers have been charged for killing Michael.

Leroy Browning was also killed on December 20 2015 at Palmdale, California.

Deputies say Browning (30) fled when they were attempting to arrest him for driving under the influence (DUI).

They claim he put the deputies in a ‘beat tug’ and reached for a firearm before being shot by deputies.

Roy Nelson was killed on December 19 2015 in Hayward, California. Hayward police responded to a report of a man needing an emergency mental health evaluation.

After arriving, officers determined Nelson needed an involuntary psychiatric hold and put him in the back of a police car.  On the way to the hospital, police said Nelson tried to kick out the car’s rear window.

The police forced Nelson into a leg restraint after which Nelson died.

No officers have been charged for killing Nelson.

Miguel Espinal was shot and killed by NYPD officers in an incident that started with a traffic stop in the Bronx, New York.

Espinal fled, instead of stopping, prompting a police chase that ended in a crash.

Espinal left the vehicle and ran to the surrounding Tibbetts Brook Park, where police killed him.

His family said he ran from the officers because he did not have a licence.

“Whether he ran from the cops or not, it doesnt justify that he got shot…”Justin Juble, Espinal’s brother said.

Nathaniel Pickett was killed on November 19 2015 in the Barstow, California, when he jumped a fence and became ‘unco-operative’ when a deputy stopped to question him, police said.

When the officer tried to handcuff Pickett, they claim a fight broke out, ending with the deputy shooting Pickett.

Tiara Thomas was killed on November 18 2015 in Portage, Indiana.

A Hammond police officer killed this mother of three.

Cornelius Brown was killled on November 18 in Opa-Locka Florida, with the police accusing him of hitting the windshield of  a patrol car and ignoring commands from police.

No officers have been charged with the crime for killing Cornelius.

Jamar Clark was killed on November 15 2015 in Minneapolis, Minnesota, when two Minneapolis police officers shot him, claiming he ‘interfered’ with emergency responds helping an assault victim.

Activists and witnesses maintain that he was unarmed and handcuffed when he was shot.

Again no officers have been charged with a crime for killing Clark.

Oakland police claim they were towing vehicles when Richard, 39, approached them and ‘pointed a firearm in their direction’.

Michael Lee Marshal was killed on November 11 2015 in Denver, Colorado.

The 50-year-old mentally ill man paused no physical threat when three sheriff’s deputies restrained him into unconsciousness at the Denver jail.

He died after nine days on life support.

No officers have been charged with a crime for killing Marshal.

The 27-year-old died while handcuffed in the custody of DC special police officers, armed security guards licensed by the city.

No officers have been charged with a crime for killing Smith.

Only 13 of the 104 killings by police in 2015 resulted in officers being charged with a crime.

Only four cases — Matthew Ajibade, Eric Harris, Paterson Brown Jnr and William Chapman — have resulted in convictions of officers involved, with a fifth case, that of Walter Scott, resulting in the officer pleading guilty.

Some of the cases include Ojibade who was killed in Savannah, California.

Ojibade’s girlfriend called 911 to ask police to take him to the hospital because he was having a manic episode (he had bipolar disorder).

Instead, they arrested him and took him to the Chatham County Detention Centre.

The Sheriff’s Office claims that he fought officers, so they put him in a restraining chair.

He died in the restraining chair.

Paterson Brown was killed on October 17 2015 in Richmond, Virginia.

An off-duty police officer shot  Brown who was aged 18.

The officer claimed Brown got into the officer’s car at a gas station and began driving it while the officer was waiting for it to be washed.

A witness told reporters that the officer identified himself as a police officer and ordered Brown to get out of the car.

The officer claims Brown ‘made a sudden movement’ before the officer shot him.

Officer David Cobb was charged and convicted of involuntary manslaughter for killing Brown. He was sentenced to only three months in jail.

And the senseless killings of African-Americans continue.

Eric Garner died on July 17 2014 at 202 Bay Street, the New York City borough of Staten Island at the hands of Daniel Pantaleo, a New York City Police Department (NYPD) officer who put him in a choke hold while arresting him.

Garner had just broken a light, according to witness testimony.

Brown and a friend were walking in the middle of Canfield Drive, a two-lane street when a police officer drove by and told them to use the sidewalk.

After words were exchanged, the white officer confronted the 8-year-old.

The officer shot and killed the unarmed Brown.

Eric Garner and Michel Brown’s cases were variously dismissed because grand juries decided not to charge either officer involved in these cases.

Whether cases were/are attended to thinly or not at all, the preceding list, which is just a minute scoop, evidence of disregard of black lives.