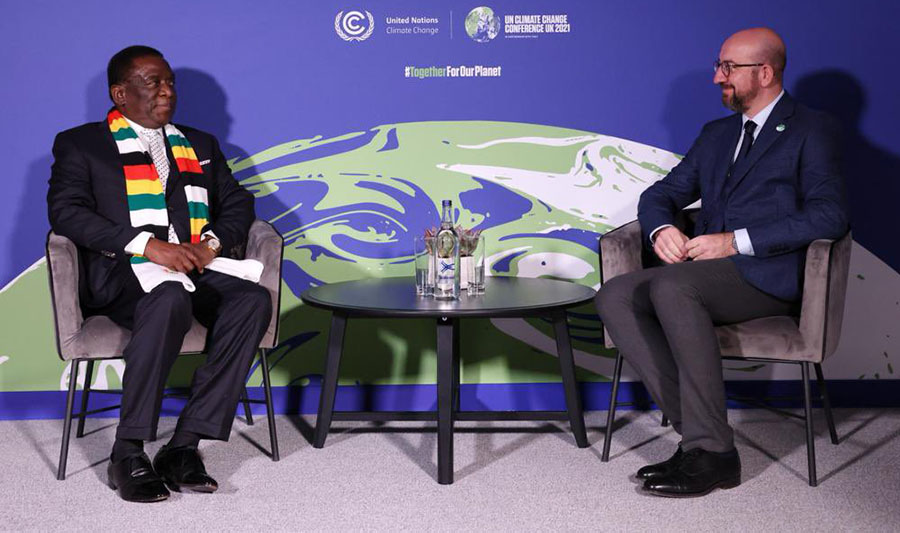 By Gracious Mugovera and

PRESIDENT Emmerson Mnangagwa’s attendance of the the 26th UN Climate Change Conference (Conference of the Parties 26/COP26) in Glasgow, Scotland, which came hot on the heels of the objective assessment by the UN Special Rapporteur on Negative Impact of Unilateral  Coercive Measures on Human Rights, Alena Douhan; is a major breakthrough of the Second Republic’s engagement and re-engagement policy.

It presented President Mnangagwa with the opportunity to interact firsthand with some key players in international relations and present Zimbabwe’s case and aspirations.

For instance, President Mnangagwa met the European Union President Charles Michel as well as Vicky Ford, the UK Minister of State for Africa and the Foreign, Commonwealth and Development Office on the sidelines of COP26.

COP26 is touted to be the most significant global climate conference since the 2015 Paris agreement.

Climate change has become a top priority in global affairs and Zimbabwe is a concerned party who must not be left out where issues of development are discussed.

Before his departure for Glasgow, President Mnangagwa tweeted:

“…COP26 meeting of nations comes at an extraordinary time in world history… The discussions @ COP26 are going to be an important step in agreeing a collective way forward.”

“For Zimbabwe we feel the impact of climate change more than others. Our temperatures have risen by approximately 2 degree celcius. Over the past century. Which has seen a significant increase in extreme weather. In the  past two decades alone, we have had to deal with 10 droughts. If the world doesn’t step up, we will see jobs lost, livelihoods destroyed, and  people will lose their lives.

That is something we must avoid and why Zimbabwe is coming to the table with ambitious plans to tackle climate change. Zimbabwe has now committed to reducing emissions by 40 percent before 2030. The time of words is over- we must act now….”

Climate change is seriously affecting the sustainability and well being of  developing countries as they depend  directly on climate sensitive natural resources for their livelihoods.

Climate change is one of the most challenging problems the world is facing today.

Clearly if countries do not take measures to reduce emissions there will be catastrophe.

Infuriatingly, while Africa is the least emitter it is the one place that has been severely affected by climate change.

According to UN Fact sheet on Climate Change, Africa accounts for only two-three per cent of the world carbon dioxide emissions from energy and industrial sources.

Effects of climate change are causing a significant change in cropping patterns, making it difficult for African nations that rely on agriculture to feed their people.

For example, in Zimbabwe, damage of the devastating Cyclone Idai are still visible while horrific memories of Cyclone Eline still linger.

In his address at COP26, President Mnangagwa said climate change was affecting vulnerable countries in Africa.

“Zimbabwe has not been spared from Climate Change challenges which has led to an increasing frequency of severe drought and cyclone induced floods.”

“The expectation is that major emitters will scale up mitigation action and show greater interest in adaption,”said President Mnangagwa.

According to the Vice-Chair of Intergovernmental Panel on Climate Change (IPCC), Ko Barret:

“Human activities has warmed the planet with the impact from climate change happenings in levels we have not seen in hundreds in some cases thousands of years.

“The world has already warmed approximately 1.1degrees Celsius above pre-industrial times with every decade breaking more record temperatures,” she said

The Irony is that Africans continue to be invited to debates and conferences like COP26 and readily pledge to mitigate and adapt while countries that are highly industrialised appear not eager to reduce their huge emissions in the shortest possible time.

Africa has borne the brunt of climate change experiencing high temperatures, floods and droughts which has retarded efforts by the continent to extricate itself out of poverty.

In climate change the statement by historian Thucydides remains true “the strong will do what they can and weak suffer what they must”.

Countries like the US and India which fall under the highest emitters apperently require more time to reduce their emissions.

US President Joe Biden told the world that his country has set a target to reduce greenhouse gases emissions  to net zero target by 2050.

Shockingly, India’s Prime Minister Narendra Modi on the other hand has set a target of net zero gas emissions by 2070.

Can the planet afford this? Why not now? Will earth recover from the damage caused by these emitters reluctant to reduce their emissions?

So-called African and Zimbabwean protestors hired and paid to protest against their governments should be protesting against countries like the US who are destroying the planet.

Africans should constantly ask themselves: Will Africa be safe by 2050?

It seems the ‘anthem’ at the COP26 is the encouragement and promise from developed nations to uphold the moral obligation to assist developing nations, financially.

But, is this the assistance that Africa needs to curb climate change?

Will this assistance save the planet?

Gutteres said it: “The sirens are sounding and “our planet is telling us something”.

The time to save the planet is now not some time in the future.