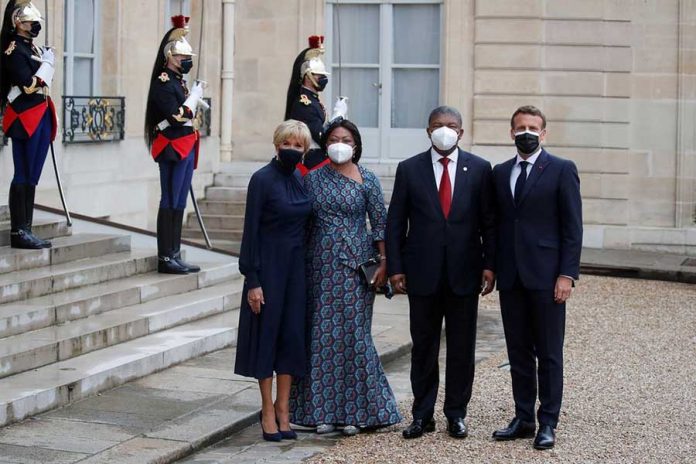 A DOZEN African heads of state were in Paris attending what was touted Africa-France Summit on Financing African Economies hosted by French President Emmanuel Macron.

The Summit sought to find ways to support ‘struggling’ African economies amid the global economic downturn wrought by the COVID-19 pandemic.

Africa has reported the fewest cases in the world.

Officials from the AU and the EU were also in attendance while other world leaders joined virtually.

The meeting has been lauded as a ‘new deal’ for African economies.

Ahead of the summit, African leaders and international creditors arrived at Paris’ Élysée Palace on Monday for a dinner hosted by Macron and his wife Brigitte.

It was a spectacular event as French and European flags were hoisted outside the palace with the Republican Guards in salutate.

Watching the 4 min 46 sec of the news clip of the dinner event on Associated Press, the Bleeding Africa Feeding France cartoon quickly came to mind.

I made some inferences: Who is feeding who at this Élysée Palace banquet?

The allegory of ‘bleeding Africa and feeding France’ is no exaggeration.

France may have withdrawn the physical colonial administration, but it continues to be omnipresent in many West and Central African economies more than 60 years after independence.

To ensure it retained all colonial prerogatives, just before France conceded to African demands for independence in the 1960s, it forced all its 14 former colonies (CFA countries) to sign a colonial pact.

The colonial pact demanded all French colonies in Africa pay tax for slavery and colonisation.

It is the colonial pact that obliged the African states to put 65 percent of their foreign currency reserves into the French Treasury, based on the convertibility, at a rigid exchange rate of the CFA, a currency France had created for them.

The 14 African states deposit another 20 percent for financial liabilities, making the dizzying total of 85 percent.

The African nations, therefore, have only access to 15 percent of their own money for national development in any given year.

If they are in need of extra money, as they always are, they have to borrow from their own 65 percent in the French Treasury at commercial rates.

And that is not all!

There is a cap on the credit extended to each member country equivalent to 20 percent of their public revenue in the preceding year.

Even worse, when the French Franc loses its value, they devalue the CFA to adjust for the trade deficit at the expense of African countries.

African leaders who resist are killed or become victims of coups.

Although the administration of the CFA currency was entrusted to a common central bank (comprising BCEAO and BEAC), these so-called African banks are only African in name.

The reality is they have no clout and are nothing more than huge bureaucratic institutions which have no monetary policies of their own.

They exist to give the CFA countries the impression they too are masters of their own monetary destiny, which in reality is not the case.

The African CFA zone countries continue to this day to perpetuate a system put in place by their former colonial master.

It is also the colonial pact that demands that France has the first right to buy or reject any natural resources discovered in Francophone countries.

It’s only after France says: “I’m not interested,” that the African countries are allowed to seek other partners.

In the award of government contracts, French companies must be considered first and only after France’s ‘right of first refusal’ can the poor countries look elsewhere.

As a result, in many of the French ex-colonies, all the major economic assets are in the hands of the French.

In Côte d’Ivoire, the jewel of the former French possessions in Africa, for example, outside Parliament, almost all the major utilities – water, electricity, telephone, transport, ports and major banks – are run by French companies or have French interests. The same story subsists in commerce, construction and agriculture.

In short, the colonial pact has created a legal mechanism under which France obtains a special place in the political and economic life of its former colonies.

In March 2008, former French President Jacques Chirac said: “Without Africa, France will slide down into the rank of a Third (World) power.”

The pact also includes clauses that former colonies have an obligation to make French the official language of the country and the medium of instruction in education.

Through a sophisticated scheme of scholarships, grants and ‘Defence Agreements’ attached to the colonial pact, Africans send their senior military officers for training in France.

The result is armies that are virtually commanded by French-trained officers.

Defence Agreements oblige Francophone states to maintain French military bases on their soils and these soldiers are ready to intervene in any Francophone African state to topple ‘recalcitrant’ leaders and replace them with more docile ones.

No wonder the African summit on COVID-19  had to be held in Paris.

Couldn’t  they find a place in Africa where they could have held the summit?

Managing editor of the Insight newspaper, Kwesi Pratt Jnr, has expressed disappointment in the African presidents who attended the summit in France:“So, if there is an outbreak of COVID in Africa and we want to discuss issues about it, we have to go to Paris.

We couldn’t organize it in Ghana, Lagos or Abuja, unless we send it to Paris.

Emmanuel Macron is doing this because he knows what he wants.

This arrangement between us and the former colonial metropolis doesn’t help Africa.”

And the invitation list speaks volumes of France’s intention.

It was not by coincidence that South Africa’s Ramaphosa, Nigeria’s Buhari and Egypt’s Fattah el-Sissi where invited to the banquet and summit.

Senegal-based economist and university lecturer Khadim Bamba Diagne claims that France is looking to retain its control of African economies, and that handing out loans plays an important part in maintaining that role.

Diagne believes that African nations would be better served by going to international bodies for funds rather than accepting the loan conditions that have historically been used by France.

The terms favour French companies, he says, undermining the development of the country’s own private sector.

France seized this opportunity to reposition itself on a continent in full growth and whose Gross Domestic Product (GDP) has tripled since 2000.

The former colonial power has not only lost market shares to the benefit of India and China, but, in 2017, it also lost its status as Africa’s leading European supplier, overtaken by Germany.

Sadly, it seems the Elysée Palace banquet was all that France needed to make inroads, as African leaders have been hoodwinked by a paltry US$100 billion loan.

When will Africa wake up?