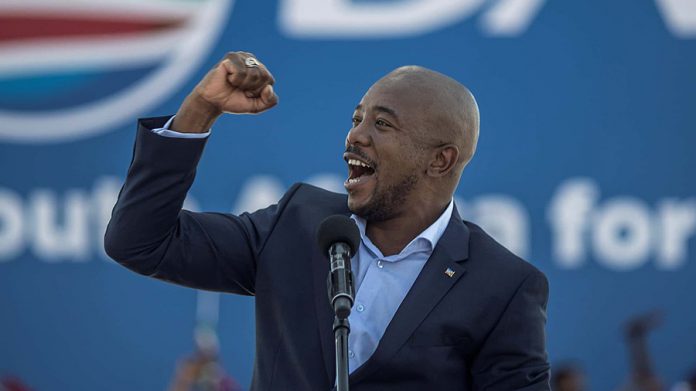 THE embarrassing public spat between South Africa’s white-owned and controlled opposition Democratic Alliance (DA) former leaders Anthony James Leon and Mmusi Maimane over the former’s apt and sobering statement that the latter was ‘an experiment that went wrong’ is no different to MDC vice president Tendai Biti’s unholy alliance with his American handlers.

Like Maimane, Biti has unwittingly assumed the role of the US’ blue-eyed boy where he has been mandated with specific instructions to depose the Government of Zimbabwe from power through the so-called regime change push.

Maimane was given a devastatingly sobering reality check over the Easter holidays by Leon, who led the DA from its inception in 2000 until his retirement from the party leadership in 2007.

Just like the opposition MDC in Zimbabwe, the DA stands for white capital, hegemony and monopoly, with a specific task to cull the land reform and economic empowerment initiatives in South Africa.

But with the increasing calls for equitable distribution of land and resources witnessed in Zimbabwe in 2000 through the Land Reform and Resettlement Programme, the DA sought to sell the world a dummy when they appointed Maimane its leader on May 10 2015 until his inglorious exit on October 23 2019.

The idea which went horribly wrong, as Leon aptly puts it, was to experiment with a black face in order to mask the DA’s wretched white politics.

Speaking to News24, Leon said: “Maimane was an experiment that went wrong.”

The import of this blunt assessment by Leon is obviously lost to people like Maimane and Biti who are enmeshed in the myopic view that black people cannot do anything on their own in the absence of a white hand pulling the strings.

They are showered with all sorts of praises which lull them into colonial hangover-induced sleep.

Maimane was lauded as a ‘bright’ spot among ‘progressive minds’ on the continent when he did the bidding of the marauding whites in SA.

What he could not grasp, just like his counterpart Biti here, is that he was, until the Easter brutal attack, ignorantly advancing the DA’s interests.

Not surprisingly, the DA has not distanced itself from Leon’s statement.

To his credit, Maimane was honest in his response to Leon.

“The project of dehumanising is certainly one that is historic. I was offended…but in some ways, not surprised. I am a human being. Not your science study,” said Maimane.

“For context (Tony Leon) makes these offensive remarks because I wanted the party to celebrate the life of #WinnieMadikizelaMandela when she passed and to expand the party base beyond its traditional voters. That was the right thing to do and I stand by those decisions.”

But Leon was undeterred.

“Indeed it’s an experiment to elect as leader someone who never voted for his own party in the general elections before he joined it,” he said.

Indeed racism is firmly embedded in the DA’s DNA.

In March 2017, Leon’s successor Hellen Zille stoked controversy with a string of racist posts on twitter.

“Getting onto an aeroplane now and won’t get onto the Wi-Fi so that I can cut off those who think EVERY aspect of colonial legacy was bad,” she tweeted.

“For those claiming legacy of colonialism was only negative, think of our independent judiciary, transport infrastructure, piped water etc.”

In Zimbabwe, it was only a fortnight ago that the Americans unwittingly let the cat out of the bag with their angry outburst over Biti’s recall from Parliament by his PDP party.

In an unsurprising press statement titled ‘Actions Against Opposition Members in Zimbabwe,’ the US State Department (March 22 2021)  spokesperson Ned Price betrays Uncle Sam’s long-held desire of installing a pliant government in Zimbabwe with characters like their cohort Biti firmly in the thick of things.

“The United States is following events in Zimbabwe closely, including the troubling moves on March 17 to strip Movement for Democratic Change Alliance (MDC Alliance) Vice President Tendai Biti and other MDC Alliance members of their elected seats in Parliament,” reads the statement in part.

“Since March 2020, parliamentary maneuvers supported by the Zimbabwean Government have led to the ouster of 39 MDC Alliance MPs and 81 local elected officials. These actions subvert the will of voters, further undermine democracy and deny millions of Zimbabwean citizens their chosen representation.

“We continue to monitor efforts by the Government to dismantle the MDC Alliance through the arrest and detention of its leaders and diversion of its assets. We also note the Government’s selective enforcement of COVID-19 regulations to indefinitely postpone by-elections and prohibit MDC Alliance gatherings, while permitting internal elections and gatherings for the ruling Zimbabwe African National Union-Patriotic Front (ZANU-PF) party and its allies to go forward.

“The ZANU-PF is misusing the levers of government to silence critics, neutralise opposition and entrench its political power over the Zimbabwean people.”

In that vein, we cannot miss the Biti and Maimane connection, especially in the context of unravelling their naivety.

In June 2017, Maimane had no kind words for Zambian President Edgar Lungu who had detained that country’s opposition leader Hakainde Hichilema on treason charges for allegedly obstructing President Lungu’s convoy.

Said Maimane in a press release:

“The DA is unequivocally committed to the advancement of vibrant, competitive, multi-party democracy, the rule of law and the entrenchment of human rights and free speech across Africa. The persecution of Hichilema goes against these values, and as such, we must stand in solidarity with those who are fighting for true democracy on the continent.

“The DA will re-establish South Africa’s leading voice on the continent for the entrenchment of democracy and the upholding of human rights on the continent, a role we surrendered after the Mandela presidency.”

Maimane was duly barred from entering Zambia as he attempted to attend the treason trial of Hichilema.

“In this light, I will be making contact with African leaders, including Morgan Tsvangirai and Tendai Biti, in order to establish a plan of action on the way forward in entrenching democratic values and the rule of law in Africa,” Maimane wrote.

“We must not cease in our efforts to liberate Africa from the stranglehold of ‘big man politics. Indeed, opposition parties have a role in realising this through co-operation.”

Biti has also been portraying himself as the face of the Americans in Zimbabwe.

Soon after the swearing in of MPs in 2018, he bizarrely claimed that his party ‘held’ the keys to unlocking the country’s economy.

By that he meant it was him and his American handlers who could drive the economy forward!

On May 21 2020, he wrote a letter to World Bank Group president David Malpass, urging the lending group to deny the country funding.

“All Africans are grateful for your work to galvanise a global response effort to assist sub-Saharan Africa during the COVID-19 crisis. The swift response by the Bank, as well as your advocacy for the suspension of debt payments, has resonated deeply with those of us who have begun to recognise the long-term health and economic consequences of the crisis. We also appreciate the efforts to provide emergency assistance to the people of Zimbabwe, who have been in a desperate situation even before the pandemic struck,” read part of Biti’s letter.

“However, even in these unprecedented times, any support from the World Bank Group must contribute towards our shared goal of better health and economic opportunity for the people of Zimbabwe. Any assistance must not be allowed to further enrich or entrench the very people who have destroyed our economy and democracy.”

“We have painfully learned, time and again, that the Government will abuse public resources for their own goals rather than for the benefit of Zimbabweans.

The only way that we can advance our shared goals to respond to the current crisis is to include robust measures for transparency and accountability in any assistance package. Even though the donor community accepts that funds cannot be channelled through the Government itself, the integrity of any relief is still at risk because of the close relationship between senior Government officials and certain private actors.”

When all is said and done and whichever way one looks at it, the indisputable fact is that Maimane and Biti are experiments that have gone awfully wrong.

It is high time these gentlemen wake up!