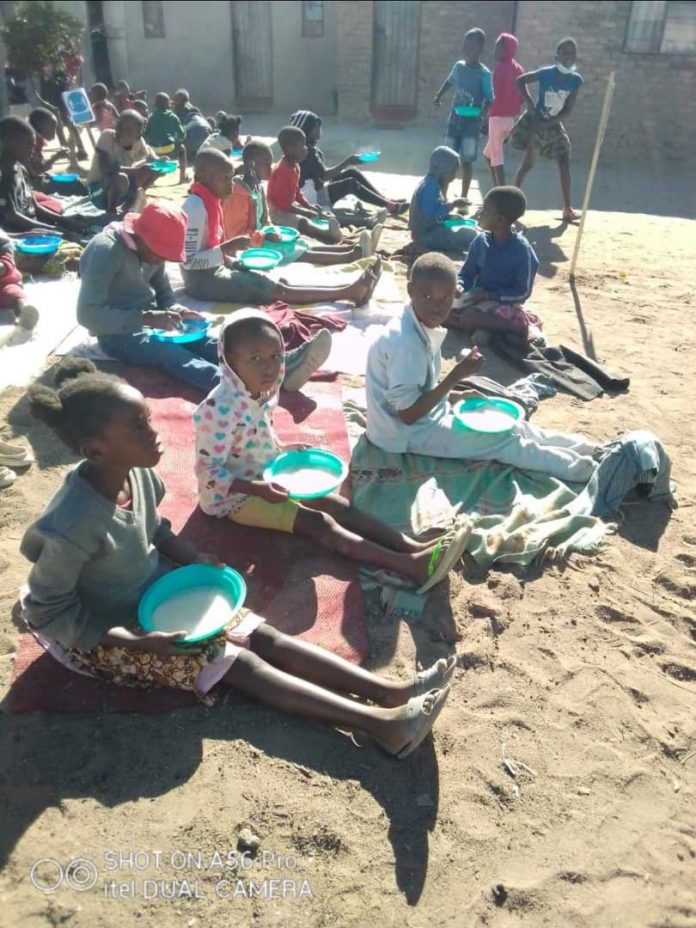 AS the two women sat at their lodgings in Munyuki, Epworth, Harare, they saw a number of children walking up and down in groups from Munyuki shopping centre carrying dirty, old paper-bags, wondering their contents.

This went on for days until the two women Caroline Bushu and Sandra Chikwana, stopped some of the children to inquire.

Their discovery was very disturbing as the children were carrying food remains from the bins and vegetable residues dumped by vendors after sorting out their wares at the shopping centre.

Apparently the children’s respective families depend on the children for food during the current COVID-19 lockdown.

“We used to give left-overs to people who kept rabbits but now they are for human consumption,” said one vendor, Lorraine January.

Epworth is a high-density dormitory location about 12km from Harare’s CBD.

The majority of people in Epworth are informal traders who survive on vending as they live from hand to mouth.

This explains why it is one of the communities most hard-hit by the current lockdown.

The poverty and hunger which was already in existence has now reached a shocking level as was witnessed by this writer after touring places such as Domboramwari, StopOver, Overspill,  Makomo, New Gada and KwaReuben, among others.

The demand for food, especially to children, is big as malnutrition is taking its toll.

The demand for water, as well, is bigger as witnessed by the unprecedented diminishing water levels in the Quarry Dam as it has now become the most important water source in the whole of Epworth.

For Bushu and Chikwana, who have been surviving through flea market vending in Harare’s CBD and have since stopped because of the current lockdown, the desperate children had to be helped with food.

Out of their savings, they started providing porridge to several children and, within a week, the number had risen to over 300 before many elders began joining the winding queue.

Seeing this initiative by the ladies, local well-wishers started to chip in by providing water, mealie meal, firewood and other basics as the number of the vulnerable kept rising daily.

A local gas company also chipped in with a free four-plate gas stove and free gas.

Currently, about 3 000 people are being fed everyday.

The feeding scheme has caught the attention of former residents of Epworth, now based in the Diaspora.

The group has since donated various foodstuffs towards the feeding scheme and will continue doing so until the situation normalises.

“Our group is a voluntary organisation open to everyone who grew up in or passed through Epworth with the aim of changing the face of the community,” said Kajau, one of the locally-based members of EMCODEV.

“As you know, Epworth has been known for the wrong reasons, like harbouring thieves, prostitutes and fugitives from the law, so we decided to complement our two sisters who have come up with this noble initiative of feeding thousands of children from this area.

“We are also looking beyond COVID-19 as we will implement projects that seek to empower youths.”

According to Ward Two chairman Chengetai Madzivanzira, Bushu and Chikwana’s feeding programme instills confidence within the local people that they can help each other as people of Epworth. “As leaders of the community, we are going to assist these two children of ours in registering their initiative so that it becomes a legal and recognisable Trust that operates at a central position so as to cater for as many vulnerable children in Epworth as possible during these hard times,” said Madzivanzira.

Bushu and Chikwana are happy with the assistance they are getting from well wishers because besides providing porridge, they are now offering sadza to the children everyday.

“We are happy that we are complementing the Government’s efforts to feed the vulnerable children in the face of COVID-19 lockdown as children of Epworth and we are also thankful to our brothers and sisters both local and in the Diaspora for their timely intervention,” said Bushu.

According to Councillor Batanai Masunda of Ward Six, Overspill, 70 percent of malnutrition cases at Parirenyatwa hospital are reportedly from Epworth.

Hunger is wreaking havoc and waiting for Government’s intervention only is retrogressive, said Masunda.

“It’s high time we change our mindset and check regularly upon our neighbours whether they have anything to put on the table,” he said.