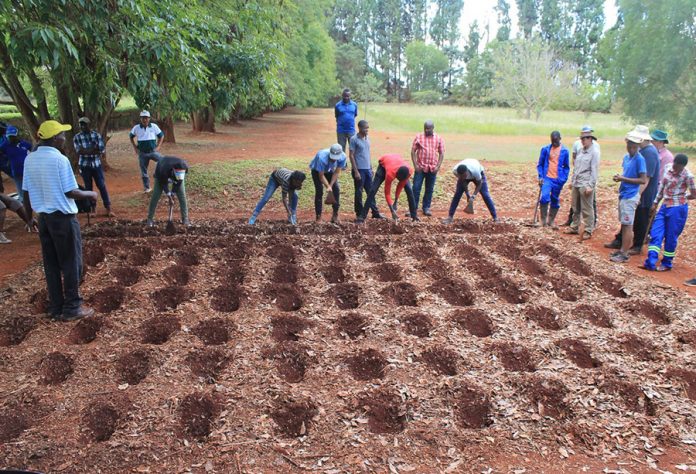 A LOT of benefits come with the Climate Proofed Presidential Inputs Scheme (Pfumvudza).

I visited Chigodora rural area in Mutare District and observed that the Pfumvudza programme is benefitting the deserving in spite of their political, religious or any other affiliation.

Under the scheme, each household in the village received enough inputs for three Pfumvudza plots measuring 16 by 39 metres.

“We were taught the Pfumvudza farming and received lime, a 50kg of basal dressing, 50kg of top dressing and traditional grain seeds for cereals and army-worm pesticides,” my 60-year-old mother MaDhliwayo testified, smiling from ear-to-ear.

This benefit of free farming inputs is a milestone.

In the past years, most of the people in Zimbabwe could not afford to buy inputs at the beginning of each farming season and this affected their yields.

The Pfumvudza Programme targets particularly the smallholder farmers who are vulnerable to the vagaries of climate change because it teaches a farmer how to use approved seed, protect seed, feed seed and protect the environment around seed hole.

The Pfumvudza concept enables the farmer to practice climate proofing agriculture through moisture conservation by mulching.

With the Pfumvudza Programme, the problem of lack of skills and knowledge base of farmers, shortage of inputs, limited access to market information and marketing facilities, limited access to finance and limited security of tenure will be a thing of the past.

The Pfumvudza Programme impacts on the low income to middle  income earners by helping them to produce enough to eat and sell.

The Government has given the smallholder farmer under the Presidential Input Support, a challenge to undertake three Pfumvudza plots on which two will be for cereal crop, oil seed or legume crop, depending on the agro-ecological region.

Having two cereal plots ensures that the farmer is food-self-sufficient for the whole year and also has surplus to sell and add to the strategic grain reserve.

Soya bean and sunflower in the package is meant to reduce importation of cooking oil while sesame will be promoted for export and hence increasing the foreign currency earnings.

All these are benefits.

One  40-year-old villager, Farirai Guruva,  had this to say:

“There are a lot of inputs that have been channelled to help the small-scale farmer to rise. The only challenge is that instead of looking forward to getting these inputs for farming, there are some who already see the inputs as an opportunity to make money for themselves.”

Hearing this statement made me think of self-aggrandisement and opportunism; the diseases that bother humans who are always looking for ‘easy’ ways to wrongfully benefit.

I asked another villager for his views about the progress being made through the Pfumvudza Programme and he argued as follows:

“Pfumvudza is a very powerful programme, which is, however, suffering blows from thieves, such that there is real need for involvement of police so as to bring the offenders to book.”

The Chigodora  experience brought me in touch with the ease of farming brought by Climate Proofed Pfumvudza Presidential Inputs Scheme  for people like MaDhliwayo, and also opened my eyes to the blows the programme is suffering.

If followed religiously, especially under the promising rains, the Pfumvudza Programme will  change  the story of farming in Zimbabwe.

The United Nations’ Committee on World Food Security defines food security as having all people, at all times, having physical, social, and economic access to sufficient, safe, and nutritious food that meets their food preferences and dietary needs for an active and healthy life.

The Zimbabwean agricultural sector, which is responsible for feeding the nation sees itself on recovery mode to fulfil this mandate by engaging Pfumvudza.

Moreover, Chapter Four of National Strategic Development 1 (NDS1) states that “…over the years, average productivity of both food and cash crops across all farm types has been declining” but  “access to quality, nutritious food is fundamental to human existence and necessary for human happiness. Secure access to food can produce wide-ranging positive impacts, including economic growth and job creation.”

Pfumvudza is an instance of the Government’s commitment to end nutrition insecurity.

The Pfumvudza Programme has been adopted by the Government as a measure to address the problems of low productivity, low production which might have been caused by poor agronomic practices, poor soils, the impact of climate change and failure to approach agriculture from a business perspective.

However, while there have been repeated warning that  the  Pfumvudza inputs are not for sale, there has been cases of theft, misuse and abuse of the Presidential  Pfumvudza agricultural inputs.

There are some people who registered but did not have  land!

These people were not able to account for the inputs they received.

Sources revealed that there are others who inflate the list of beneficiaries to the extend of including the names of dead people, like that Karoi village chief and his secretary who  added the names of the dead to the beneficiaries’ list.

The Ministry of Lands, Agriculture, Water and Rural Resettlement  recently underlined again that  the Pfumvudza inputs  are not for sale and that the public must report those who are selling them.

Engagement with political and traditional leadership, civil society, well trained Agricultural Extension Workers and Agricultural Extension Supervisors across provinces and other partners has been initiated to harmonise the approach and to ensure successful implementation but there is need for unison for success of the programme.

There is need to be united to achieve the goal of Pfumvudza and those who hold positions in distribution process are supposed to be honest and not like the Chegutu councillor, two soldiers and  a police officer who recently faced the wrath of the law for diverting over $1 million worth of inputs meant for small-scale farmers.

The Climate-Proofed Presidential Inputs Scheme (Pfumvudza) is meant to improve  productivity, ensure  food self-sufficiency and surplus, not to enrich the corrupt.