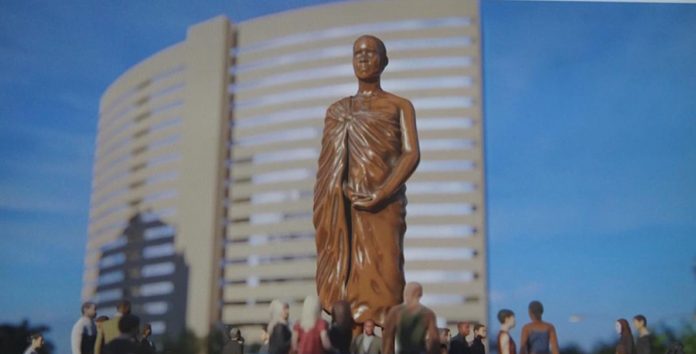 PRESIDENT EMMERSON MNANGAGWA recently said the Government decided to honour Mbuya Nehanda for her heroic acts against colonialism which she paid for dearly when she was hanged by the colonial regime on April 27 1898.

Mbuya Nehanda’s statue is set to be erected in Harare’s CBD at the intersection of Samora Machel Avenue and Julius Nyerere Way.

It is crucial to scrutinise what Mbuya Nehanda’s statue will signify.

Apparently statues fall under the blanket word ‘monuments’ and Madge Dresser (2007), in Set in Stone? Statues and Slavery in London, argues they warn, evoke memory and have ‘capacity to stir emotions’.

When erected, Mbuya Nehanda’s memorial statue should continually elicit the spirit of resistance against suppression, subjugation and bullying that Zimbabweans have stood against.

Elements of suffering and hope are captured in monuments.

The definition of a monument in www,nationalbuildingmuseum.net/pdf/WSCERP2012p is “…a physical object, such as a building, pillar, or statue that is build to keep the memory alive of a person, persons or event.”

A statue is a way of celebrating a hero or heroine and, in this case, Mbuya Nehanda is celebrated for playing a crucial role in the liberation struggle that gave Zimbabweans the independence we celebrate today.

Putting up a statue of Mbuya Nehanda is to immortalize the spirit of the struggle in a monumental way.

Cambridge Dictionary defines a statue as “…a carved figure made from a hard material, especially stone or metal to look like person or animal or the event it is representing.”

Nelson Mandela, for example, is erected in several places in South Africa as a symbol of resistance against apartheid.

Some early monuments include the pyramids of Egypt, the Roman Colosseum and the Great Wall of China.

African American slavery monuments in Savannah, Georgia, US, in another instance, depicted suffering and enduring hope towards the end of slavery as exemplified by a black family caught in a tight embrace with broken shackles at their feet.

Around the world, there are monuments erected with intention to tell loudly of the white legacy.

There are images of slave masters, signalling dominion over other humans.

According to the World War 1 Memorial Inventory Project (http://wwi-inventory.org/www.ext.vt.edu/topics/4h-youth/ makers), there were monuments constructed in communities across the US at the end of the First World War.

One of the famous American monuments is the Statue of Liberty, dedicated in 1886 as a symbol of freedom and democracy.

The overriding characteristic of those Western monuments is that they are exclusively Western in perspective and their underlying narratives are self-magnifying.

Zimbabwe must have monuments with narratives based on her unique experiences as a nation.

Therefore, monumental representation, like the upcoming Mbuya Nehanda statue, will invoke a spirit of resistance against subversive efforts aimed at silencing and colonising elements which led to the liberation struggle in Zimbabwe.

Mbuya Nehanda’s statue immortalises and explicitly projects the anti-colonial cause, even to generations to come.

The Mbuya Nehanda monument tells the story of our nation: where we came from, especially our hard won independence.

President Mnangagwa said it was the task for those who took part in the fight against colonial rule to record the country’s history and this points to the responsibility to undertake various ways of compiling narratives, of which erecting statues is one.

Mbuya Nehanda led the war during the First Chimurenga and she led us when we fought during the Second Chimurenga, that is why we are recognising her so that the young generation will know who led the war against the colonial regime.”

The  erection of statues of liberation war icons is not idolatry but celebration of heroes and putting resistance against foreign narratives in front.

Mbuya Nehanda led the war during the First Chimurenga and she led us when we fought during the Second Chimurenga that is why we are recognising her so that the young generation will know who led the war against the colonial regime.”

Statues are a way of honouring people who contributed to the present freedom and have never been properly honoured.

Honour must be consistent with the deeds in Zimbabwe as President Mnangagwa also said Government will remove the remains of Allan Wilson and his 34 soldiers from Matopos and rebury them at the site of their defeat.

“How can the vanquished be honoured when the victors are not honoured?” President Mnangagwa asked.