Home Feature Lessons from Ukraine: Part One…Africa and the right side of history 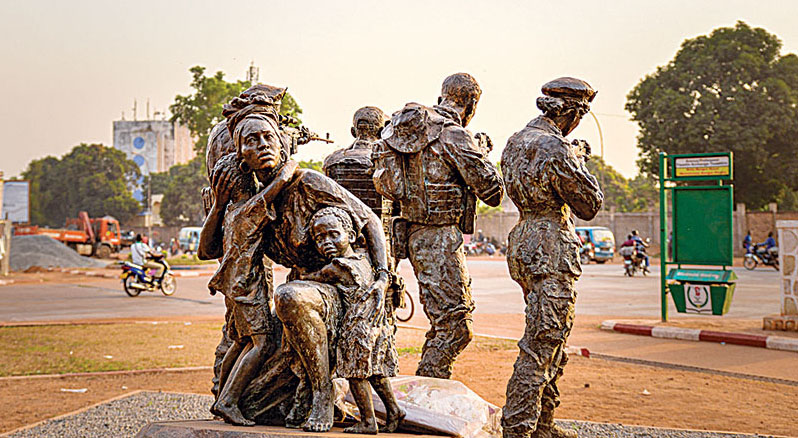 RUSSIA’s special military operation to de-militarise and de-Nazify Ukraine is now six months old and, six months is enough time for a crisis to have gravitated into conceivable patterns that translate to useful perspectives for those who wish to draw lessons from it.

Beyond all doubt, the Ukraine crisis has divided the world by offering the entire human race the choice to support the possibility of a new world order of mutual respect between nations or a return to the old order of racist Western imperialism.

It is not a choice deriving from the rightness or wrongness of the causes but, largely, from the possible outcomes.

The US-led NATO and the EU are actively siding with Ukraine by supplying weapons and unprecedented billions of US dollars in financial aid to sustain their proxy.

In the early stages of the war, Ukraine’s US-led allies chanted slogans for ‘Freedom and Democracy’ and international rule of law to mobilise support for Ukraine. This was then modified to include ‘Right Side of History’, a catch-phrase coined by a frenzied Western media to mobilise international condemnation of the special operation they chose to call ‘Russia’s war on Ukraine.’

Once the self-professed champions of freedom and democracy suggested the existence of ‘a right side of history’ and went on a whirl-wind crusade gang-pressing sovereign nations to join the NATO bandwagon or face violent consequences, the majority of those apparently sitting on the fence immediately sided with Russia. That alone has been the deciding factor for many countries that would have taken a neutral position because they have nothing against both Russia and Ukraine; countries that have been friends to both; countries that originally abstained from the US-proposed UN vote to condemn Russia.

Six months down the line, one pattern that is irrefutable is that it has not been the usual walk in the park the Western bullies had become accustomed to in the genocides they committed in Africa, Asia, Latin America, North America, Australia and, most recently, Vietnam, Iraq, Libya and Afghanistan. ‘Right Side of History’ is no longer in use now. It turned out to have been ill-conceived by white supremacists who had expected historic victims of Western atrocities across the world to be outraged by the victimhood of ‘blue-eyed’ Europeans.

‘Right Side of History’ conversely foregrounded US-led atrocities against non-Europeans across the world; atrocities that outrageously included, and still include, non-European Americans of which African-Americans are the most affected.

The right side of history for black people brought to America as slaves and then denied compensation or civil rights up to this day is unambiguously anti-American.

The right side of history is a slogan that cannot be chanted to mobilise Floyd’s black kith and kin to fight alongside white supremacist security forces. Muhammad Ali’s reason for refusing to fight in Vietnam is iconic of this position. He said: “My enemies are not in Vietnam but here in America.”

The Black Lives Matter movement in America is, in essence, a declaration of the African right side of history. ‘Right Side of History’ is no longer in use now because it turned out that the right side of history for the non-European world is decidedly, morally, legitimately and irrefutably anti-American.

It has already been suggested that none of the US-led NATO and EU victims across the globe need any persuasion to recognise that chants for ‘democracy and freedom’ from the West predominantly portend terror and genocide.

‘Nigger-hunting and lynching’ became a white supremacist sport in America. The countries of Southern Africa, in particular, are supposed to forget that it is Russia that gave them weapons to free themselves from US-backed European colonial powers.

Zimbabweans are supposed to forget that no European State gave ZANLA or ZIPRA weapons to liberate themselves from the Anglo-American backed Rhodesian mafia.