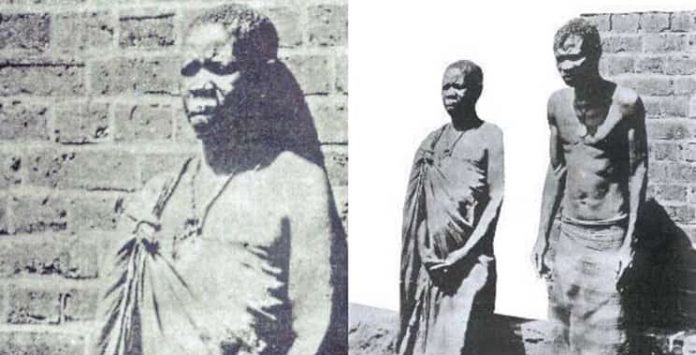 MBUYA Nehanda was murdered by the British imperialists on April 27 1898.

They hanged her for leading the Chimurenga war of liberation.

The British Crown is responsible for her death.

She told them her bones would rise and drive them out.

It is a truism.

It came to pass.

At Easter, Christians celebrate the death of Christ as the price he paid to liberate mankind from the force of evil.

It is a spiritual law when you are martyred, that for which you are killed does not die with you, it is not buried with your body, it is magnified, regenerated with greater force by your death, by your ultimate sacrifice you achieve your goal.

When they hanged Mbuya Nehanda, a much greater force was unleashed, regenerated through thousands and thousands who took her mantle to fight the whiteman to achieve her goal; that for which she laid down her life and they did achieve the ultimate she fought for, they liberated this great gracious sacred land.

Having captured her, locked her up, the whiteman was still upset about Mbuya Nehanda.

Why was it not enough that they had her in their custody to do whatever they wanted with her.

Why was it not enough that they had tried and falsely convicted her for murder when in fact they were the murderers and she was just a freedom fighter defending her land, a sacred gift from her Creator?

They had not defeated her! You can arrest the body, but not necessarily the spirit.

For you to arrest both, the spirit must submit to your iniquity. If the spirit does not submit, you have not done anything.

The spirit still remains undefeated, still defiant, still defeating you even after the demise of the material body, still demanding justice.

They chained her hands and fettered her feet in leg irons, but she still was defiant, she still denied they had any rights to her land or any authority over her, which meant all their force, their guns, their grandstanding had left her spirit unscathed, totally unmoved, not even the death sentence.

And this unsettled them to the end of their wits; they knew they had lost, they were utterly frightened of her.

When they pronounced the death sentence on her, she began to sing and dance… . She did not break down nor did she show any signs of distress; instead she told them if they killed her by whatever means, her bones would rise and drive them out.

How do you chain an elderly female in both hands and feet!

What has so frightened you that you lose your sanity?

There was no victory for the whiteman in this war, only temporary respite.

Because she remained so undefeated thus spelling their own defeat and doom, they launched the second battle against her, the battle for her soul, their last ditch effort to win the war.

And Fr Richartz, the Roman Catholic priest based at Chishawasha Mission would launch this attack charging that:

If she was to succumb, they would win, the British armed robbers, victory would be theirs.

Whenever the one who leads the nation succumbs, the nation loses the war.

But Nehanda knew who she was, knew her source.

She did not sell out, she stood for the truth.

She was the highest ensconcement of Musikavanhu, His chief medium.

She would not relent, thus she corrected the whiteman:

‘You are the thief who came and stole my land, it is you who needs His forgiveness not me’.

That was Mbuya Nehanda’s ultimate triumph — she won the battle for her soul.

When they killed her, they had long lost the war. She did not accept their masquerading as owners of what was hers, of which she was a custodian at the behest of Musikavanhu.

‘Ko iwe unogonditonga uriwe mubvakure unonditonga sei’… she knew in the depths of her soul and she would not commit anathema.

They were afraid of her indomitable will, courage and fearlessness so they thought they could diminish her, cast the ultimate insult against her and her God.

But they lost; she told them it is you who are the criminals not me.

She was undefeated unto death.

The whites could not deny that she was the greatest Chimurenga force and so they could not even be at peace about her burial so they buried her in a secret grave lest the natives ‘…would take away their bodies (she and Kaguvi) and claim their spirits had descended to any other prophetess or witchdoctor’.

They would deny her loved ones, the people she led, the opportunity to pay their last respects and honour their heroine, so crassly barbaric to someone even in death.

In fear the Romans put a guard at Christ’s grave lest his disciples steal his body and claim he had risen.

It is the same fear of the undefeated spirit, it haunts you until you act totally insanely.

Who has ever heard of a corpse being guarded, a corpse so tortured and tormented even if it were to rise it would not be able to do anything in that battered state.

It is not about material bodies, it is about undefeated, triumphant spirits.

The allegory was lost on Fr Richartz.

His years at a theological seminary had not opened his eyes to spiritual truths leading him to blunder shamelessly against a correct ensconcement of Musikavanhu.