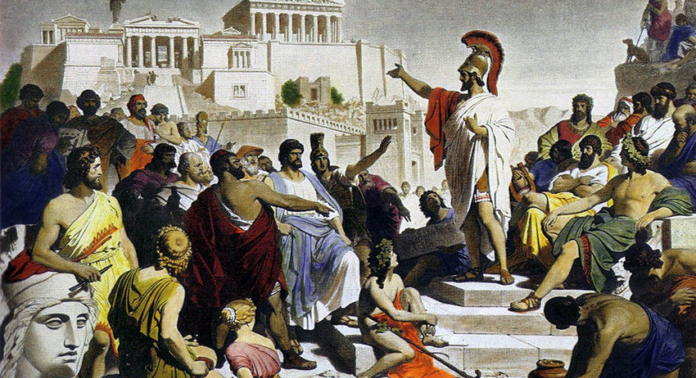 WITH the rise of Macedon and Alexander the Great’s conquests ‘Classical’ Greece entered the Hellenistic period.

Greek became the lingua franca far beyond Greece itself, and Hellenistic culture interacted with the cultures of Persia, central Asia, India and Egypt.

Significant advances were made in the sciences.

The Hellenistic period ended with the rise of the Roman Republic to a super-regional power in the 2nd Century BC, and the Roman conquest of Greece in 146 BC.

In 323 BC, Alexander died in Babylon, aged 32.  Although officially succeeded by Arrhidaeus, a feeble-minded half-brother and an infant son named Alexander, his actual heirs were his generals, who fought for the right to succeed Alexander for the ensuing two decades. These wars were fueled by over 180 000 talents of gold and silver taken from the treasuries in Persia.

Through warfare and other means, the fabulous wealth of the East was now put into circulation.

Politically, by 301 BC, the basic makeup of the Hellenistic world was defined.

In place of one great empire, there were three kingdoms.

Egypt, many of the Aegean islands, parts of Libya and much of the eastern coast of the Mediterranean made up the kingdom of Egypt, ruled, until its conquest by Rome, by the Ptolemaic Dynasty of kings, descended from Ptolemy, one of Alexander’s Macedonian generals.

Macedonia, the land of the great conqueror’s birth, was ruled by the Antigonid Dynasty, the descendants of the Macedonian general Antigonus.

While these three kingdoms dominated this new world, the political and cultural milieu was far more complex.

Most of the Greek city-States on the mainland, in the Aegean and in Sicily as well as southern Italy remained independent minor players.  Encouraged by the rivalry between the three kingdoms, a number of independent States came into being in Asia on the borders of the great powers.

Though Alexander had spawned a new civilisation described as Hellenistic, a fusion of Greek, Middle Eastern, and Oriental elements, most of the economic components of this new age, such as banking and the commercial web, pre-dated Alexander.

The greatest changes brought about by the conquest were a general breakdown of barriers to trade and the influx into circulation of vast sums of gold and silver previously hoarded in Persian treasuries, which stimulated trade and industry.

In effect, there came into being a vast trading area that stretched from the Indus River to the British Isles, with strong governments in many places capable of maintaining order and preventing piracy from disrupting commerce.

While there were wars and revolts, trade was promoted assiduously.

Alexander did not live long enough to see this era of greater commercial and cultural interaction between the West and the East, but it was not long in coming.

There was a quickening of contacts in the 3rd Century BC.

Trade increased substantially among lands bordering the Red Sea, the Persian Gulf and India while in time, it extended as far as China.

The differences between the Hellenic and Hellenistic ages can be seen in the contrast between Athens at the height of its power and prestige and Alexandria, the greatest of the new Hellenistic cities.

The comparison is somewhat akin to one between 18th Century London and 20th Century New York.

London was an important city with commercial tentacles that stretched throughout the world, but it was undoubtedly English.

New York was more far-reaching, a global city with a varied population that included people from all quarters of the globe.

Alexandria, in contrast, had a population of some 400 000 Greeks, Jews, Persians, Arabs and Egyptians, among others, and the economy was far more complicated and diverse than that of any previous Greek city.

People of varied backgrounds joined together to form trading companies; money changers dealt in coins from all parts of this complex world.

Alexandria was one of the chief grain markets of the world and also a major manufacturing centre, producing papyrus, flax, glass, cosmetics and jewellery.

The Aegean islands of Rhodes and Delos, by virtue of geography, became important transfer points. Antioch, on the Orontes River in Syria, was another major trading centre, as was Seleucia on the Tigris. Although the new rulers in Europe, Asia and Africa did inaugurate certain economic innovations; they basically followed established economic patterns in their domains.

For all three kingdoms, the major source of revenue was, as before, agriculture.

The State-owned large tracts of land were cultivated by peasants who paid an annual rent to the government. Other lands were taxed.

All three kingdoms maintained control of certain natural resources, most often mines, forests and quarries.  Usually, these were exploited through contracts with guilds of specialists or private contractors, except in Egypt where government officials were in charge.

As in the previous age of the Greek city-States, most taxes were collected by tax farmers. The auction of taxes in Egypt was held once a year in Alexandria.

Those areas of the kingdom outside Egypt alone produced 8 000 talents annually.

But there were differences from one kingdom to another.

The Seleucids, in particular, followed a policy of limited State interference in trade and commerce.

Their domains were both more geographically expansive and more culturally and ethnically diverse than those of either the Ptolemies or the Antigonids.

Especially in the Greek areas along the eastern Aegean coast and in the newly formed Greek cities of Asia, these Seleucid rulers adopted the economic practices of the Greek city-States, thereby permitting much free enterprise. Egypt was a different case altogether.

Here, the State monopolies so characteristic of ancient Egypt were not only maintained but expanded.

The Ptolemies held exclusive rights to the manufacture of various products.  Papyrus, beer, honey, salt and most vegetable oils were State monopolies.

In these industries, State officials controlled every stage in the production process, from planting and gathering to retailing, with all wages and prices fixed.

What is perhaps most striking is that the control extended all the way to the village level — nor could these goods be easily acquired from abroad.

To import products for which the State claimed a monopoly required special permission.

All such items then had to enter Egypt at fixed points, be registered and be assessed a duty.

Even the temples had to obtain royal permission to produce a product regarded as a State monopoly. With other industries, primarily textiles, there was a sizable State-controlled segment, but private weavers and companies were permitted to operate.

One of the great innovations of the Hellenistic Age was the creation of State banks. These initially appeared in a number of city-States, but the most noteworthy of these government banking corporations was organised by the Ptolemies in Egypt.

The main bank was in the capital, Alexandria, with branches throughout the country.

These branches were, in fact, farmed out to individual contractors and, as a result, even villages often had their own State banks.

These institutions collected the State’s revenues from royal officials and tax farmers and sought to invest any funds that were not immediately spent on government activities. The bank also attracted private capital, primarily from government officials.